Culture | Lining Up for the Repin Retrospective
RssMail

Lining Up for the Repin Retrospective 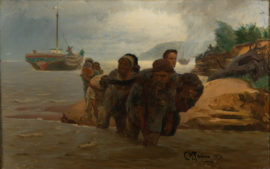 The Tretyakov Gallery continues its series of retrospectives of prominent turn-of-the-century painters with an enormous exhibition of works by Ilya Repin. Devoted to the 175th anniversary of the artist’s birth, the retrospective at the Tretyakov Gallery is only the first of three shows. After Moscow it will travel to the State Russian Museum in St. Petersburg, the Petit Palais in Paris and the Ateneum Art Museum in Helsinki.

Born in 1844 in what is now Chuhuiv, Ukraine, Repin was one of the leading members of the group “Peredvizhniki,” sometimes also called “The Wanderers” or “The Itinerants,” a group of Russian realist painters opposed to restrictions of academic art. He’s considered one of the most important Russian painters of the 19th century.

The show is spread over three floors of the New Tretyakov Gallery and includes 170 paintings and 130 drawings from 35 collections, including the Tretyakov Gallery, Pushkin Museum of Fine Arts, the Museum of Leo Tolstoy, the Russian Museum in St. Petersburg and the Ateneum Art Museum in Helsinki. The exhibition is chronologically divided into 14 sections, covering more than 50 years of his career.

Repin began in Europe (1873-1876), where he traveled with all expenses paid by the Academy of Arts. While living abroad, the painter experimented with several styles, which are represented in the show: impressionism (nature studies of Montmartre and Veules); “old masters” (portrait of his younger daughter Nadya); and even orientalism (“African Woman”).

One of the main principles of the Peredvizhniki was to depict real life, including quotidian subjects, like workers in a field or people picnicking in a park. While studying at the Imperial Academy of Arts in St. Petersburg Repin worked on one of his most famous paintings, “Barge Haulers on the Volga,” which embodied these new principles. “Barge Haulers” became a kind of symbol of the movement, even though Repin finished it six years before becoming a member of the Peredvizhniki.

“Barge Haulers” depicts eleven exhausted men dragging a barge along a waterway. Inspired by a scene he saw on the outskirts of St. Petersburg, Repin traveled to the Volga River to make sketches of real barge haulers. When exhibited, the painting caused quite a bit of uproar, its critics called it an “anti-Russian and anti-patriotic view of reality” — a tendency in Russian art criticism that has continued until the present. 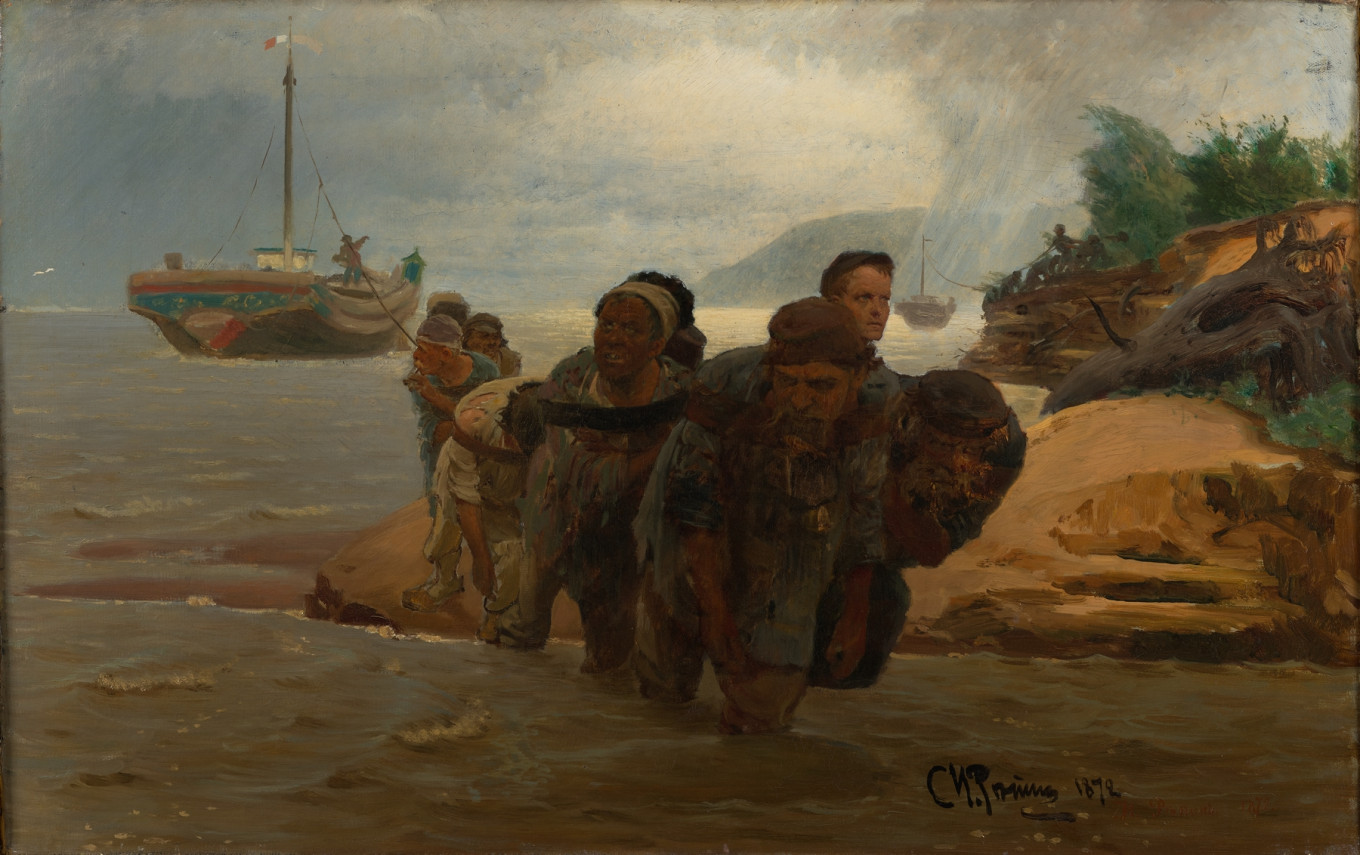 Portraits of the great and powerful

In the 1880s and 1890s, Repin became known primarily for his portraits. He received commissions from the Imperial family and painted Alexander III and Nicholas II, which later led to Repin’s largest work (4 by 8.77 meters): “Ceremonial Sitting of the State Council on May 7, 1901 Marking the Centenary of its Foundation.” The painting, which solidified Repin’s stature as a prominent portraitist, depicts 81 State Council members. This huge painting and several dozen sketches usually occupy a separate hall at the Russian Museum, but it was brought to Moscow for the retrospective.

Repin’s friendship with Russia’s most famous — and later, most infamous — writer, Leo Tolstoy, warrants an entire separate section at the exhibition. They met when the writer visited Repin’s workshop and continued their friendship to the end of Tolstoy’s life. Repin often visited Tolstoy at his estate in Yasnaya Polyana and his Moscow home in Khamovniki.

Both supported each other when their works were censored. Repin painted one of Tolstoy’s most famous portraits in 1887, as well as several other classic depictions of the writer, including “Lev Tolstoy in a Ploughed Field” and “Lev Tolstoy Barefoot.” Repin’s role in Russian art is often likened to that of Tolstoy’s role in Russian literature: both had an eye and an ear for the everyday moments that capture a personality or event.

One of Repin’s most famous portraits is, however, not in the show. In fact, visitors are greeted by a blank space on the wall where a note explains that his canvas “Ivan the Terrible and His Son Ivan” would have been placed here.

The painting is being restored after a drunk visitor attacked it last year, smashing the protective glass and ripping the canvas in three places. He explained that the 1885 painting “distorts historical facts” and deserved to be destroyed. The painting shows one of the most formidable Russian rulers crying over his dying son, purportedly killed by his own hand. This was the second time the painting had been damaged: in 1913 it was attacked by a disturbed icon painter.

Sitting out the revolution

In 1899 Repin bought a country estate called “Penaty” in the village of Kuokkala in the province of Finland (today a suburb of St. Petersburg) and began to live there in 1903. At Penaty, he finished working on his famous painting “Zaporozhian Cossacks” and painted several portraits of his friends, many of whom visited the painter on “open-house Wednesdays.”

One of the most intriguing paintings at the exhibition is a sketch for Repin’s famous painting “October 17, 1905,” depicting the mass protests in Russia that ended with Emperor Nicholas II signing the Manifesto granting basic civil liberties. Unlike the final version, the sketch has dark, dancing figures flying over the crowds of protesters, as if portending more violence to come.

Although initially welcoming the 1917 revolution, Repin chose to stay at Penaty, which became part of independent Finland. Soviet authorities offered Repin work in Leningrad in 1926, but he politely declined. The painter continued to live at the Penaty until his death in 1930. He was buried on his estate. Today Kuokkala is once again part of Russia, renamed Repino after the artist.