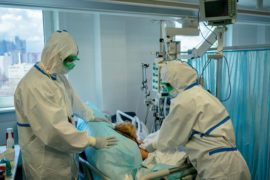 A small elderly woman lies curled up in bedsheets with an oxygen tube in her nose, coughing as doctors cocooned in white suits care for her.

In a nearby bed, an elderly man is on a ventilator. In another a woman in her 50s lies on her belly to improve her oxygen saturation.

This is the intensive care ward at a branch of Moscow’s K+31 private hospital. Until a week ago, it was a luxurious private clinic where you could get a nose job.

Yet as the capital shoulders the weight of Russia’s virus onslaught, with more than 26,000 cases, the facility has switched entirely to treating coronavirus patients.

In the state-run hospital next door, where 500 patients are being treated, the situation is the same, he says.

He calls the virus fight a “battlefield,” where medics combat an invisible enemy with homicidal intentions.

The situation is set to deteriorate in the next two or three weeks, he warns, predicting “mid-May will be the absolute top of the peak.”

“I think we are talking about new cases multiplying day by day, five or 10-fold.”

The burly middle-aged man with curly ginger hair from Georgia came to Russia to study medicine and specialized in critical care.

The virus is a “major test for the health system, for Moscow’s medicine,” he says, vowing: “We will overcome it.”

Tens of thousands of beds have been made available in Moscow and the recent opening of large new virus hospitals “will allow us to better overcome this difficult situation,” Churadze told AFP.

Yet virus treatment at this facility is not accessible to most Muscovites.

It takes cash-paying patients or those with private health insurance and a course of treatment costs tens of thousands of dollars, Churadze says.

The private hospital group that owns it, Medinvest, also runs a much bigger coronavirus hospital for public health patients.

The entire hospital, including administrative floors, has been divided into “green” or clean and infectious “red” areas, including lifts.

Doctors are kitted out with protective gear but getting hold of this equipment is a challenge, Churadze says.

“A black market for personal protective equipment has even appeared and a lot of people are making money from this.”

In the intensive care unit, doctor Sergei Sevalkin is helping treat a patient in her late 60s.

“We have one patient in a serious condition who was transferred from another hospital.”

Working for hours in a protective suit is one of the hardest parts of treating virus patients, he says.

“After a shift you feel like ripping it off.”

Another doctor, Kamila Tuichiyeva, works to categorise new virus patients according to the seriousness of their condition.

“The whole team has got used to things now and I think we’ve got into an even rhythm,” she says.

Like many staff, she has moved into a hotel to avoid infecting family members, and plans to live there for the duration.

Yet she denies feeling any “kind of heroism.”

“Yes we are working with a dangerous infection, but it’s ordinary work, nothing special.”

Yet the chief doctor says he disagrees and says his staff have “gelled into a tough team.”