Culture | Markus Martinovich and the Art of Play
RssMail

Markus Martinovich and the Art of Play 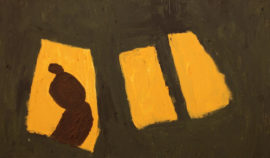 The Flacon Design Factory north of Moscow’s city center hosts some of Moscow’s most cutting-edge artists and exhibitions. This week one of the spaces is showing an exhibit that is sensational even by Flacon standards. Called “I’m Here. I’m With You,” it is a three-floor solo show of an artist who works in virtually every genre, from sound art to painting on canvas. The artist has been exhibiting his works for five years, and one of his early paintings was recently sold at Sotheby’s.

The artist is Markus Martinovich. He is 12 years old and has autism.

Communicating with the world

Markus’ mother, Natalia Isayeva, didn’t know her son had any artistic talent until he was six years old. “He had been playing with the scanner since he was about three or four years old,” she told The Moscow Times. One day she happened to click on one of the scans he had saved in her computer. She was astounded. Even at that young age, she said it was clear he had an innate sense of balance and space.

Isayeva put up an easel with paper and paint. Markus’ first work was the extraordinary “Shadow of My Mother in the Window.”  From then on, his parents encouraged him to make whatever art he wished. 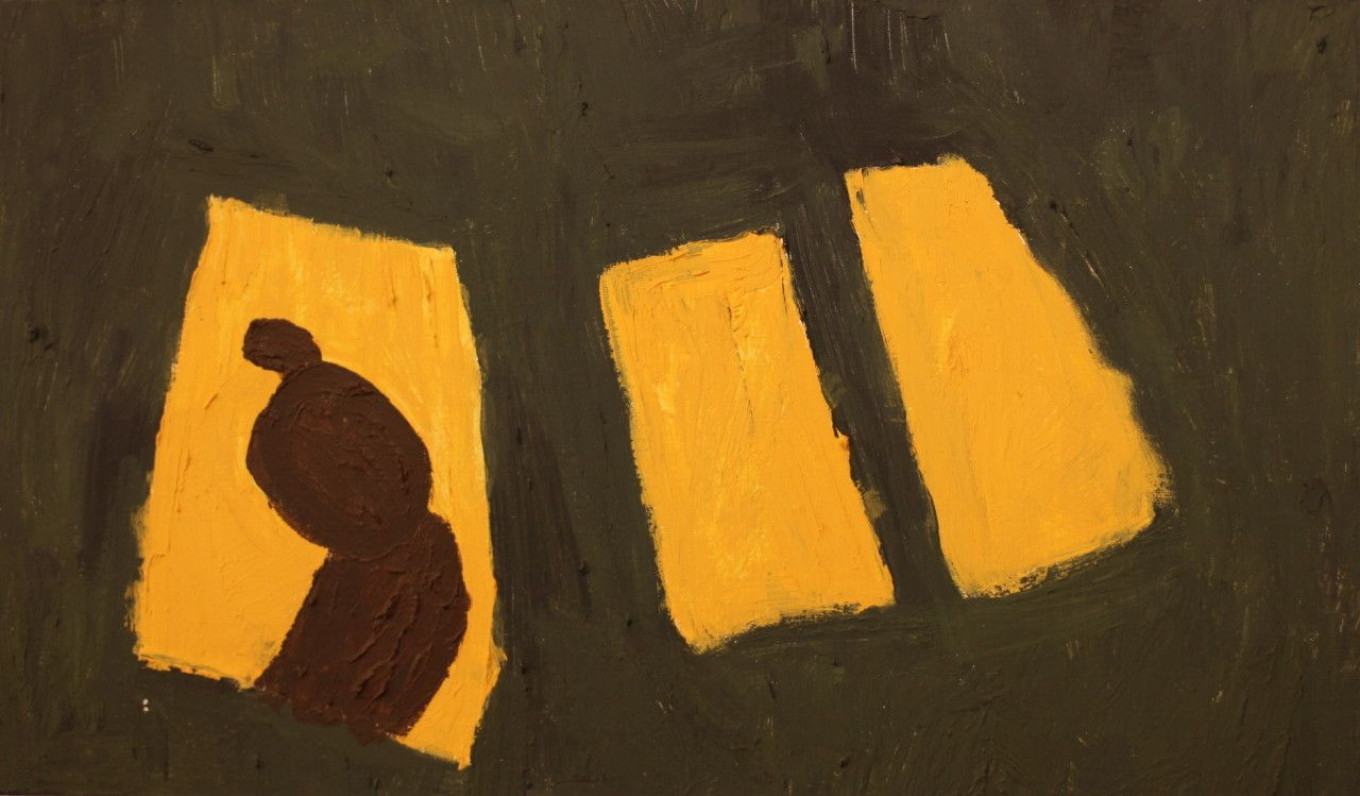 “Shadow of My Mother in the Window” by Markus Martinovich takiedela.ru

Katya Bochavar, director of the gallery Solyanka VPA and the the curator of the exhibition, has known Markus for several years. One of Moscow’s most prominent figures in the art world, Bochavar was working in a gallery that Isayeva frequently visited. One day she told Bochavar that her son was an artist; could she show her his work? “That happens a lot,” she told The Moscow Times. “I was skeptical. But she showed me them and I really liked them. I organized a show and worked on two books with him.”

Bochavar loves exhibiting Markus’ works. “He does sound art, video, photography, site-specific installations, installations, painting, graphic works, books… it’s a rare artist who works in so many genres. He can do it because for him, art is a game. He doesn’t think: What genre should I use? What am I doing? He just does it.”

To create this show in the Cube, a space at the Flacon Design Factory, Bochavar did what she always does. “I’m an artist myself — I work as curator, architect, artist, and author of performances — and I do total installations that are site specific. I come, look at the space, and the space begins to talk to me. Here I immediately saw what I’d do: paintings on the first floor, an installation on the second, and then a chance to engage with Markus through his video art and rugs on the third floor.”

The first floor is set up as a labyrinth of large paintings. They are mostly self-portraits because, Isayeva says, “He is his main subject of study. He works with what he knows best – himself. He takes what he sees in the world, runs it through himself, and presents it.” 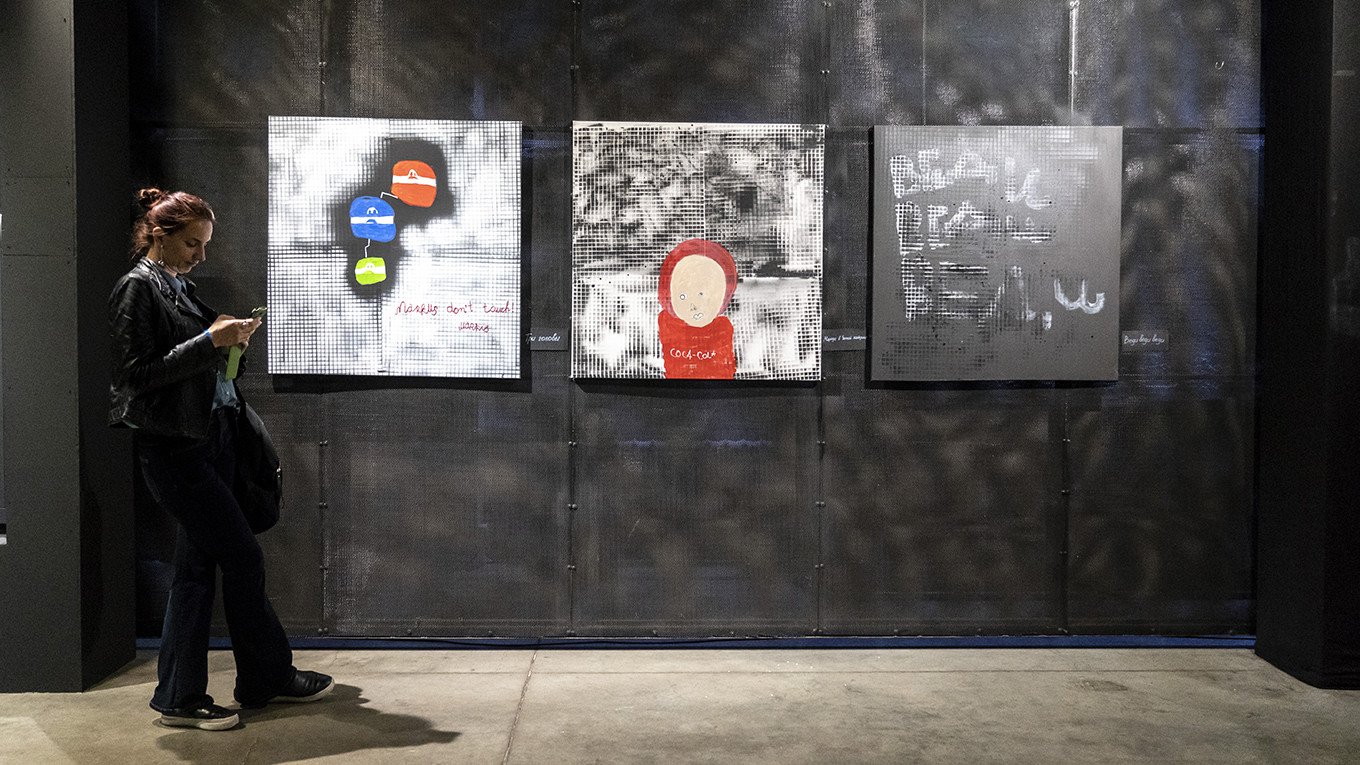 The paintings are mostly brightly colored and almost cartoonish, Isayeva says, although he also does series on other subjects, such as error codes for washing machines — “he knows every error code for every machine by every company” — and paints matrixes, screens, and any kind of repeating pattern.

Lately, however, he has been producing large works that are not portraits. Some are here on display: textured black backgrounds with white objects and letters, phrases or words.

Bochavar finds it very easy to organize Markus’ art. “He plays,” she says, “and then I play with his works.”

On a wall she calls “Travel to the Moon” are six canvases, each with a sphere that travels across the canvases and changes. Sometimes there are texts on the canvases, such as “SIT THERE” in English and “Do you want to get it from me?” in Russian, as well as nonsense words. The sphere appears to be the moon in the night sky, then the moon behind mountains, but also some other kind of sphere next to Markus’ face, painted here with crosses for eyes, which he calls “dead eyes.”

“You see it — but what is it?” Bochavar asks. “A face, a light, a spotlight…we don’t know. But it moves until the last painting, where he’s in it. The last painting is an MRI machine — the moon reversed, as it were, the anti-moon, a black hole that he’s inside of. We see his feet sticking out.” 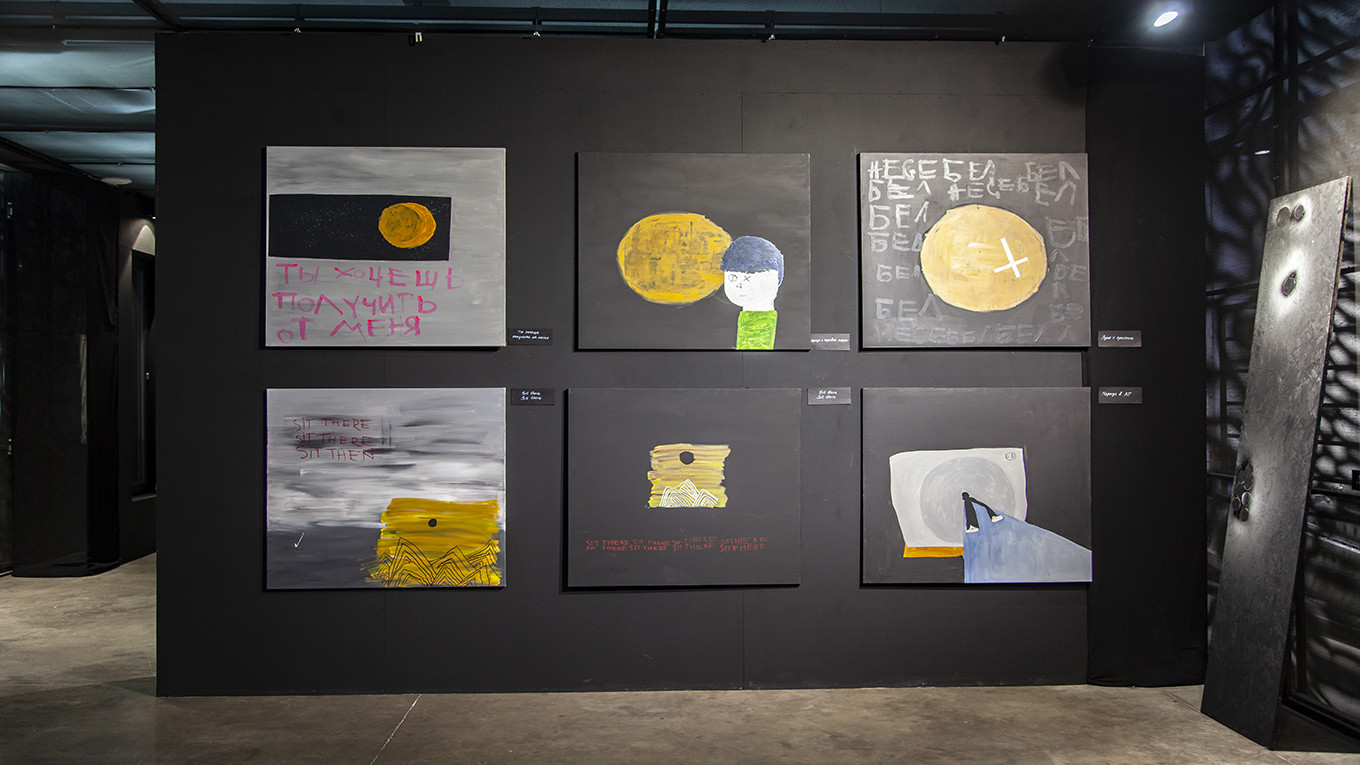 The second floor is an installation: three white rooms with two phrases painted in black on the walls, on the cushions, on the bed, the couch, and the glass windows: “I’m here. I’m with you.” Isayeva’s recorded voice repeats it on a loop. A performance by several women in white repeat phrases that Markus uses — an intimation of his inner world — and sweetly walk up to visitors to embrace them.

Isayeva explains that Markus has epilepsy. “He doesn’t lose consciousness when he has an episode, which is just awful. What can I do? I hold him – it happens to him every day – and I say ‘I’m here. I’m with you.’ So that he knows that he’s not alone when this terrible thing happens.”

From a young age, those two sentences became something of a mantra for Markus, a phrase he repeats if he’s alone for a moment, or falls, or wakes up in the night from a bad dream. “’I’m here. I’m with you.’ It’s a phrase that protects him,” Isayeva says.

The idea of the room appeared when Isayeva asked him to think about infinity. “He said, ‘Infinity is: ‘I’m here. I’m with you’.” 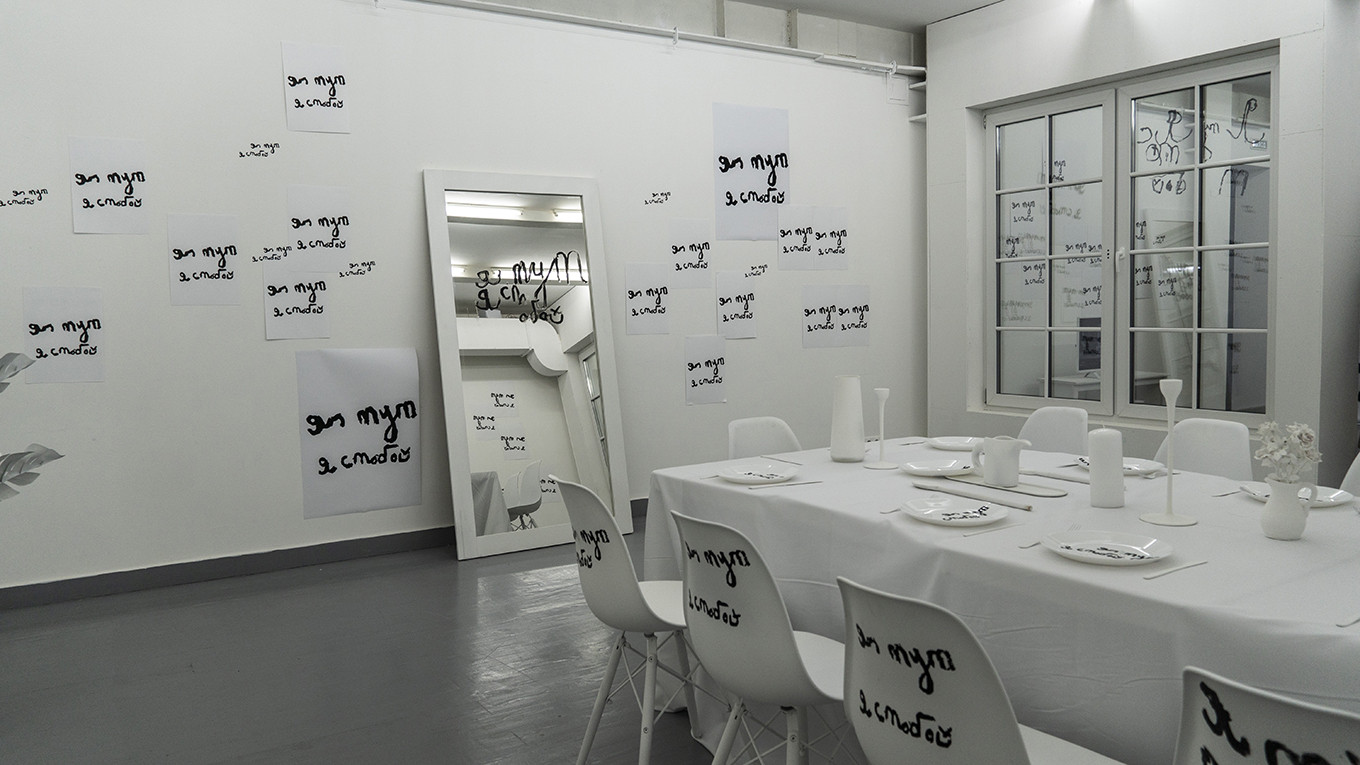 After leaving Markus’ safe world on the second floor, visitors can ascend to the open third floor space. On the floor are thick, colorful Oriental carpets with painted words — some nonsense words, some phrases like “I’m sick of everything.”  Around the room are 14 television screens and monitors, each with a self-portrait. A few are recognizable — images of a face stretched this way and that, or the flash of a photograph amid static — but most are what appear to be colored stripes, like whimsical versions of television station color bars, sometimes straight, sometimes jagged. Even those, Isayeva says, are his self-portraits. “He stretches out the images — I don’t know how he does it. But he’s a modern child, and manipulating video images is easy for him. When he was little, he would start to scan something and then pull the objects to stretch them out. This is a video version of that.” 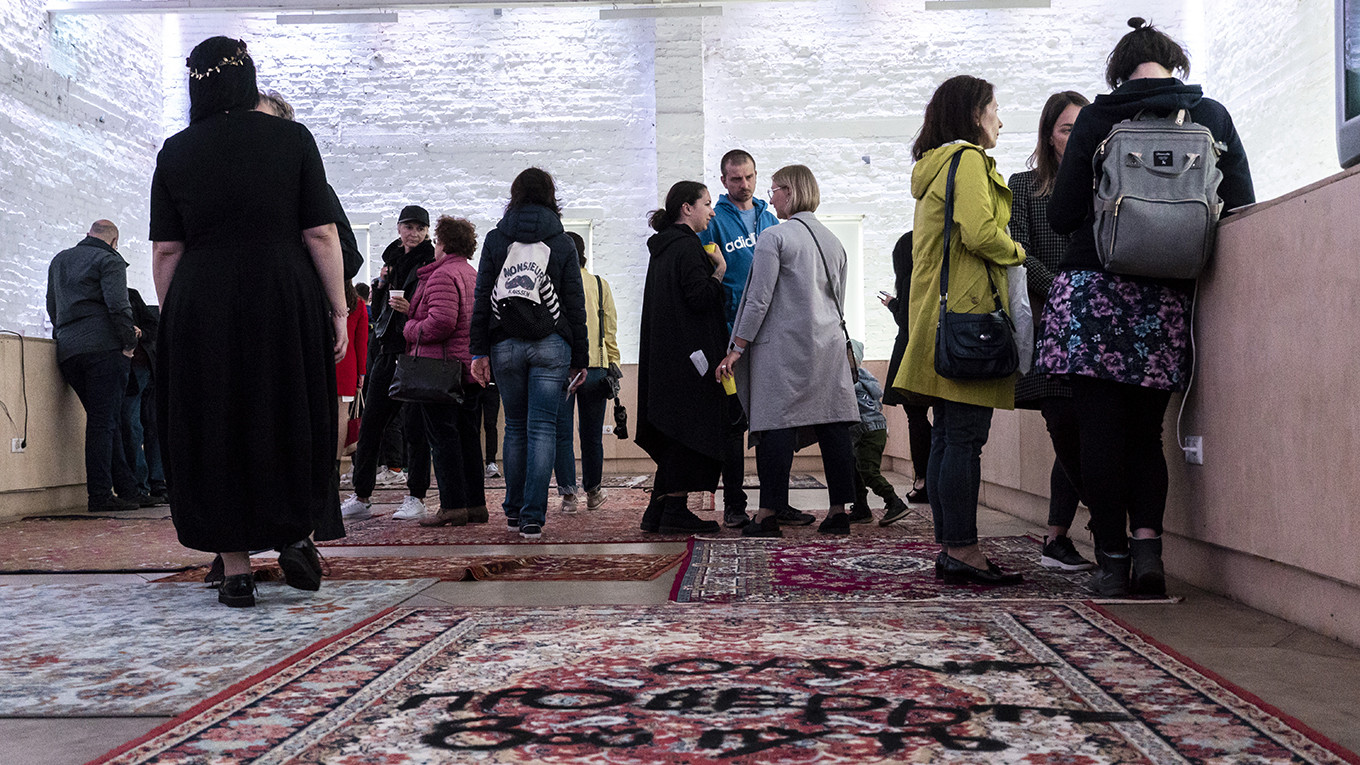 The most difficult aspect of Markus’ works and the show for visitors is their need to find meaning where there is none. Isayeva says, “It’s a game for Markus — play. You can’t really call it art because there is no dialog with the viewers. If you ask him what something means, he says ‘It doesn’t mean anything.’”

Even she struggles with this. “I know that Markus doesn’t put any meaning into them, but even I try to make sense of them, to find meaning. He says words the way we might sing a Japanese song. We don’t know what it means, but we like the sound of it. Markus does the same thing. He hears words that he likes, and he repeats them, and he thinks it’s funny when we try to find meaning in them. When you ask, ‘Why did you write that?’ he tells you, ‘No reason.’ And for him, those aren’t words, they are just white lines.”

Bochavar finds this liberating. “For an artist, there is something slightly indecent about producing only self-portraits. But Markus can do it, and he can refuse to tell you what they mean,” she says. “Today an artist must tell you what he means and what he does. If he won’t, it’s not acceptable. But Markus is privileged. As a child — and a child with autism — he can just say, ‘I’m not going to explain.’”

This troubles the viewers. One man listened to the artist’s mother explain that Markus doesn’t put meaning into his art and then began to argue with her. “Look at those works!” He pointed to the black paintings. “How could they mean nothing? They have such power. These are the thoughts of a creative personality.”

Isayeva shrugs. She’s had the same conversation dozens of times before.

Bochavar describes similar scenes at previous shows. “He does such mature, powerful work – how could he be 12 years old? Such a strong personality. Once some very famous painters came to a show and asked, ‘Why can’t we paint like this?’ I said, ‘It’s because we have another language. We can say something in a different way. But this is his only language.’”

The show will run through July 7. The Cube at Flacon Design Factory. 36 Novodmitrovskaya ulitsa, Bldg. 12. Metro Dmitrovskaya. More information on the site. 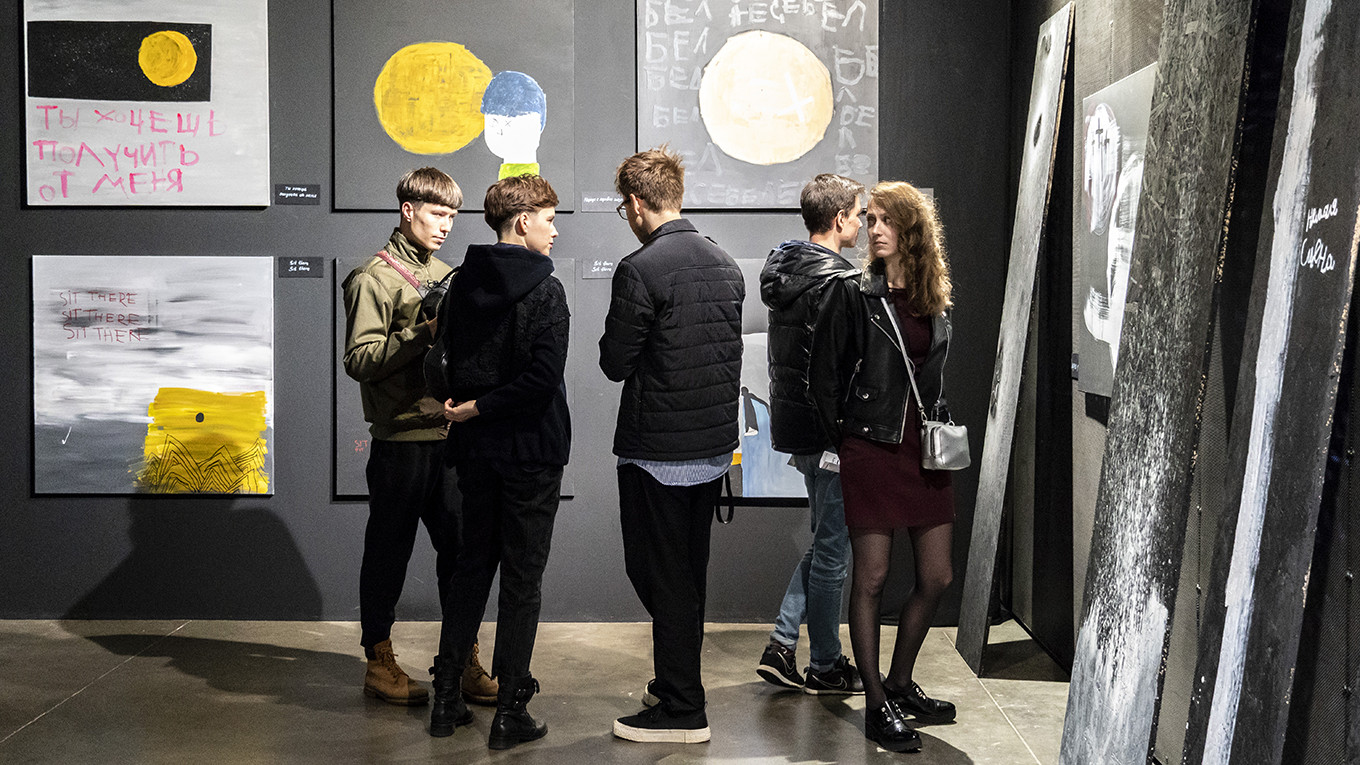