Culture | Maslenitsa festival: a week of pancakes and joy
RssMail

Maslenitsa festival: a week of pancakes and joy 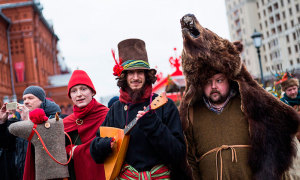 Maslenitsa is an Eastern Slavic religious and folk holiday. It’s celebrated the seventh week before Russian Orthodox Easter. Maslenitsa is the last week before the onset of Great Lent. During this week, meat is already forbidden to Orthodox Christians, but milk, cheese and other dairy products are still permitted. For Maslenitsa Russians usually have pancakes (or blinis), which are made of the ingredients still permitted by the Orthodox tradition. This year the festival started in Russia on February 20 and will last until February 26.

Ex-Soviet leader Gorbachev puts his villa in Bavarian Alps up for sale – mediaKremlin to bake 100,000 pancakes for Maslenitsa