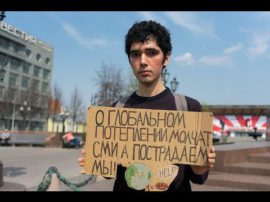 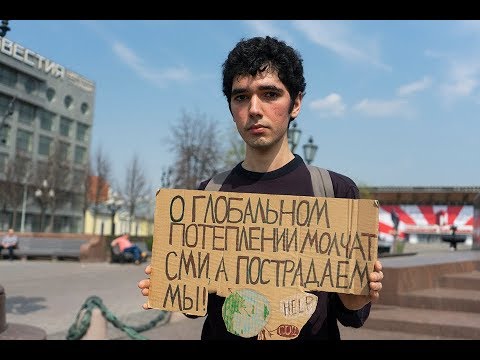 Every Friday, 24-year-old student Arshak Makichyan stands alone in Moscow’s Pushkin Square with a poster warning locals about the dangers of climate change.

He started his protest in mid-March, inspired by the #Climatestrike movement led by young activists around the world.

Back then, Makichyan and around two dozen other Muscovites gathered in Sokolniki Park in solidarity with the global movement.

But since then Makichyan, unlike his peers in other global capitals where thousands have taken to the streets, has been protesting alone, fettered by indifference and Russia’s strict protest laws.

“I know that not many people are willing to protest in Russia because most of the population doesn’t understand what global warming is,” Makichyan told The Moscow Times on a recent Friday morning.

“So I decided to start it myself as somebody had to do it.”

In Russia, single pickets are the only protest action that don’t need approval from the government.

Makichyan says that the reaction in Moscow to his picket has been mixed. Some locals are supportive, while others argue with him at length about the science behind climate change. Others even try to give him money because they think he is homeless.

But the student says he isn’t discouraged.

“I plan to hold my picket every Friday until something changes,” he said.