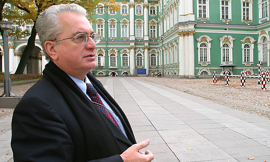 Mikhail Piotrovsky, General Director of the State Hermitage, has been awarded the State Prize of Russia for his contribution to the preservation of national and world cultural heritage.

The decree on the award of State Prizes for 2016 in the field of literature and art was signed by the President of the Russian Federation, Vladimir Putin. On 7 June 2017, presidential adviser Vladimir Tolstoi announced the names of the recipients.

The formal presentation ceremony for the State Prizes will take place in the Kremlin on 12 June 2017.