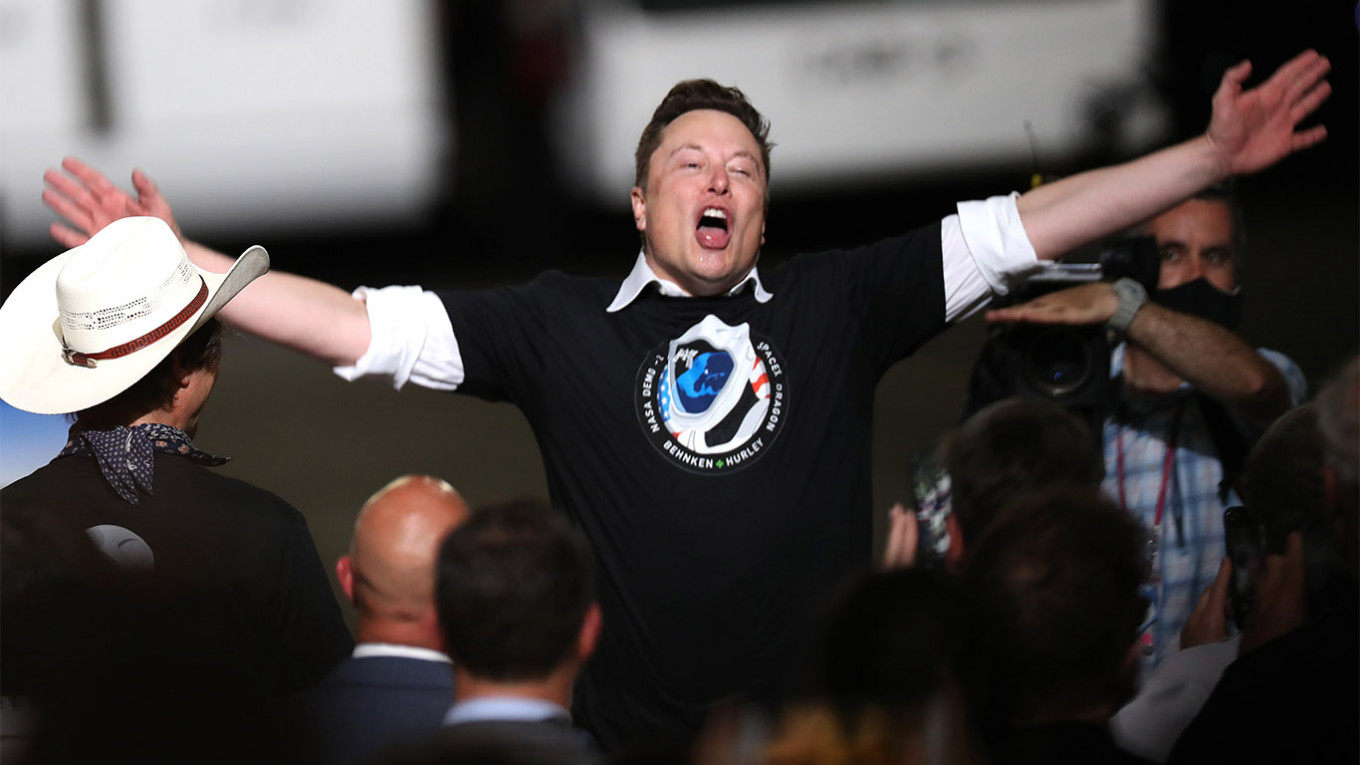 Moscow space officials on Sunday said they were puzzled by “hysteria” around the successful SpaceX flight as Elon Musk taunted Russia and U.S. President Donald Trump vowed to beat it to Mars.

On Saturday, SpaceX made history by becoming the world’s first commercial company to send humans into orbit, leading Russia to lose its long-held monopoly on space travel.

Musk lobbed a jab at Dmitry Rogozin, the Russian space chief who once said Washington may one day be forced to “deliver its astronauts to the ISS by using a trampoline.”

“The trampoline is working,” quipped Musk at a post-flight news conference alongside NASA administrator Jim Bridenstine.

Rogozin remained conspicuously silent for most of Sunday but offered his congratulations to Bridenstine after the Crew Dragon capsule with two NASA astronauts docked with the ISS.

“It’s safe to congratulate you at this point with a successful launch and docking. Bravo!” he tweeted.

“Please convey my sincere greetings to @elonmusk (I loved his joke) and @SpaceX team. Looking forward to further cooperation!”

In 2014, Rogozin, then deputy prime minister, mocked the lack of a U.S. manned flight program after Washington announced new sanctions against Moscow which included some space industries.

While Russia saluted the United States, it also stressed Sunday it was puzzled by the frenzy unleashed by what many hailed as the dawn of a new era.

“What should have happened a long time ago happened,” he added, tweeting excerpts of Trump’s congratulatory speech.

Speaking at the iconic Kennedy Space Center in Florida after the flawless SpaceX launch, Trump vowed that U.S. astronauts would return to the Moon in 2024 “to establish a permanent presence and a launching pad to Mars.”

“And the first woman on the Moon will be an American woman and the first nation to land on Mars will be the United States of America,” he said.

“We are not going to be number two anywhere.”

The Russian space agency shot back, saying it was not planning to sit idle, either.

“Already this year we will conduct tests of two new rockets and resume our lunar program next year,” Ustimenko tweeted.

He did not elaborate but Rogozin has earlier said the country planned to conduct a new test launch of the Angara heavy carrier rocket this autumn.

Rogozin has also said Russia is pressing ahead with the development of its new intercontinental ballistic missile, the Sarmat, also known as Satan 2 by NATO’s classification.

In 2018, President Vladimir Putin boasted that the Sarmat was one of the new Russian weapons that could render NATO defenses obsolete.

Russia had for many years enjoyed a monopoly as the only country able to ferry astronauts, and Saturday’s launch meant the loss of a sizeable income. A seat in the Soyuz costs NASA around $80 million.

“It’s very important to have at least two possibilities to make it to the station. Because you never know…,” Ustimenko said.

Some officials in Moscow sought to downplay the U.S. feat.

“This is a flight to the International Space Station, not to Mars,” said Alexey Pushkov, a member of the upper house of parliament.

The Russian space program sent the first man into space in 1961 and launched the first satellite four years earlier.

But since the collapse of the U.S.S.R. in 1991, it has been plagued by corruption scandals and a series of other setbacks, losing expensive spacecraft and satellites in recent years.