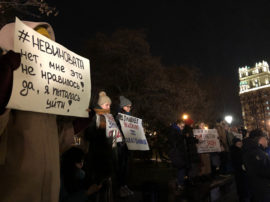 Hundreds of feminist activists rallied in central Moscow on Monday night to call for Russia’s government to re-criminalize domestic violence amid intensifying calls for the legislation to be passed.

President Vladimir Putin in 2017 passed a law easing punishments for most first-time offenders, which critics say has strengthened Russia’s culture of impunity toward domestic violence.

The protest, organized by the SocFem Alternative activist group on International Day for the Elimination of Violence Against Women, called for the government to pass a new law to re-criminalize domestic violence. A draft bill is currently in the State Duma.

Activists chanted “Free the Khachaturyan sisters,” in reference to three sisters facing murder charges for killing their abusive father, as well as “We need a law” and “Stop killing women” at the rally. Well-known feminist activists like blogger Nika Vodvud, better known as nixelpixel, were in attendance.

“I’m here because my best friend was abused at the hands of a man, her partner, and lived with him for three years because he did not give her a choice,” said Nastya, 21, one of the protesters.

“In Russian culture, unfortunately, it’s enshrined that if he hits you that means he loves you, so it’s ingrained that way into women’s minds,” she told The Moscow Times.

Protesters also called on the government to set up crisis centers in every district and to train police to work with domestic violence victims.

“We are hoping to just change the mindset of people and change their perspective and opinion,” Nastya said. “You can depend or not depend on the law and the government, but the fact that girls have come here, that they have been introduced to this awareness, is important.”

State Duma Deputy Oksana Pushkina, the domestic violence re-criminalization bill’s co-author, appealed to Russia’s head of police Monday over threats she has received from an Orthodox activist group. The group, Sorok Sorokov, has campaigned online against the bill, saying it threatens “traditional spiritual and moral values.”

A study published earlier Monday said nearly four out of five Russian women convicted for premeditated murder had been acting in self-defense against their abusers.

About 14,000 women die in Russia each year at the hands of husbands or other relatives, a 2010 UN report said. According to official figures, about one in five women has suffered violence from a partner.