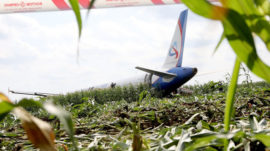 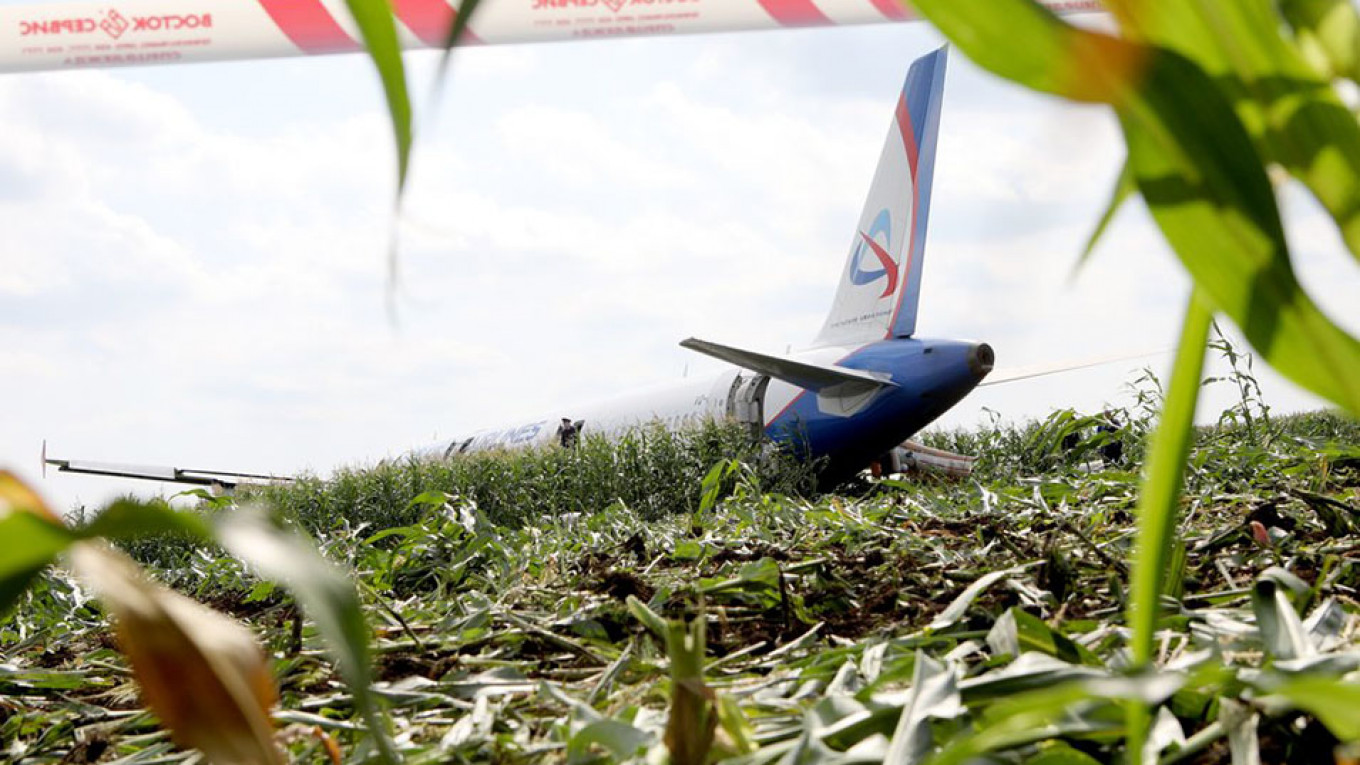 A Russian passenger plane’s emergency landing in a cornfield near Moscow after birds were sucked into its engines has been hailed by state media as a “miracle” and compared to a 2009 U.S. flight’s landing after striking a flock of geese.

Russians have said it was a miracle that no one was killed when the Ural Airlines Airbus 321 came down in a field southeast of Moscow with its landing gear up after hitting a passing flock of gulls, disrupting the plane’s engines. The plane was traveling from Moscow to Crimea’s Simferopol with 234 people on board.

“There was an emergency landing in Zhukovsky. Birds got into both engines. The engines turned off and the crew carried out the landing … one kilometer away from the runway,” the state-run TASS news agency quoted Ural Airlines’ general director, Sergei Skuratov, as saying.

One of the engines caught fire after the birds were sucked into them but the fire didn’t spread into the passenger cabin, TASS quoted an unnamed emergency services source as saying.

Up to 74 people, including 19 children, were treated for injuries, six of whom have been hospitalized, Russian news agencies quoted the emergencies ministry as saying.

The plane’s engines were turned off when it executed the emergency landing and it also had its landing gear up, according to Elena Mikheyeva, a spokeswoman for Russia‘s civil aviation authority.

Footage shot by passengers showed the flight lasted less than two minutes and that the engines had experienced difficulties almost immediately after take-off.

Vitya Babin, 11, who was on the plane with his mother and sister, said passengers had not been warned there was going to be an emergency landing. There was silence in the cabin and then screams began when it touched down, footage showed.

“We were not warned,” said Babin.

One passenger, Fyodor Galin, told the Mash Telegram channel that the plane began to shake about 5 seconds after takeoff.

“Then the lights started flashing and there was a burning smell. The plane landed and we all ran out,” Galin can be seen saying in a video published by the Telegram channel.

Passenger-filmed videos showed people evacuating the aircraft and walking through the cornfield.

State television said the maneuver was being dubbed the “miracle over Ramensk,” a reference to the Moscow region district where the plane came down.

The Komsomolskaya Pravda tabloid lauded pilot Damir Yusupov as a “hero,” saying he had saved 233 lives, “having masterfully landed a plane without its landing gear with a failing engine right in a cornfield.”

Some drew comparisons with U.S. Airways Flight 1549 which performed a landing on the Hudson River in 2009 after striking a flock of geese.

A local resident quoted by the Govorit Moskva radio station said the gulls that struck the plane had probably come from an illegal rubbish dump near Zhukovsky airport.

Moscow region officials, however, rejected that assertion and said the nearest rubbish dump to the airport was 14 kilometers away, TASS reported.

Safety concerns have plagued Russia‘s airline industry since the 1991 collapse of the Soviet Union, though standards are widely recognized to have sharply risen on international routes in particular in recent years.