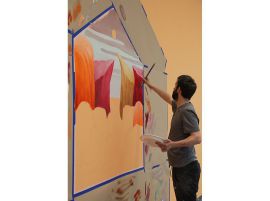 The New York-based Swiss artist Nicolas Party has painted his fanciful landscapes across long expanses before, including a lengthy spray-painted scene in Glasgow a few years back. But he’s never done anything quite like his latest work, sunrise, sunset, which stretches along the entire third floor interior of the famous circular Hirshhorn Museum and Sculpture Garden in Washington, D.C.

“A circle of space was a very interesting space to walk in,” Party said soon after its completion, because one can’t take in the whole piece in a single glimpse.

On the blue walls with hexagon windows, the icy Arctic peeks through. The house-shaped windows on an orange expanse of wall show flowers. The cathedral-like windows on a blue curve of wall open to winter scenes. On a rich red wall, windows with a curved edge show tropical scenes. Waterfalls appear in the oval windows of an orange wall, and mountains rise from rectangular windows on a deep purple wall.

“It’s almost like every mini-wall is a song, and the entire thing is an album,” he says.

Some of the pictorial content suggests work of artists past—from the Hudson River School of grand mountainous landscapes to the glistening jungles of Rousseau.

“I wanted to have different connections to painters that I’ve loved,” Party says. “I think I’ve been working a little bit like a musician, sampling elements of different paintings and putting them in mine.”

Comparing himself to a DJ who samples sounds, Party says he was open to borrowing artistic styles because of the ephemeral quality of his work. “It’s possible to do it because it will disappear,” he says. “So you can sample because it’s not something that will stay forever.”

Party’s expansive wall paintings originate from his time as a graffiti artist in the late 1990s and have transformed into environments with fanciful, vibrantly hued, imagined landscapes.

In all, there are 20 paintings in the exhibition, each depicting different aspects of sunset and sunrise—a topic that came to the artist when he thought about displaying in Washington, D.C.

“The curator invited me in January, in [the] middle of post-election,” Party says. Around that time, he was reflecting on an Election Day comment made by outgoing President Barack Obama: “No matter what happens, the sun will rise in the morning.”

“I thought it was a very powerful and poetic way to say we live in a time of drastic changes, and we’re all scared of that, but there is continuity,” Party says.

That can be seen in the elements depicted on the walls, he adds. “There is peace of mind, because you can see the force of nature every day.”

Sunsets and sunrises have been staples of painting and song for centuries, and for good reason, the artist says, calling them “the only time when you can see the shape of the universe, and the rotation of the Earth.

“It’s a pretty great thing to look at—not only colors that are so beautiful in the sky, but you are witnessing things that are gigantically mind-blowing,” he says.

Every culture reveres the daily spectacle of sunrise and sunset, Party says, and has been doing so since the dawn of humankind. The sight even stirs animals. “There are interesting scenes of monkeys going to trees and apparently they’ll look at sunsets, having this moment too—so it’s not only humans.”

Walking the museum’s circular third floor to take in all the work—an exercise that seamlessly has no start or end—mimics the continual planetary rotation that causes the phenomenon.

“The Hirshhorn’s circular galleries are an ideal complement to Party’s immersive murals,” museum director Melissa Chiu says. “With his signature use of color and space, Party transforms an abstract concept into a simulated, theatrical environment for visitors to explore.”

Like the ephemeral colors that come with each sunrise or sunset, the life of the piece will be finite as well—it will be painted over when the exhibition ends in the fall.