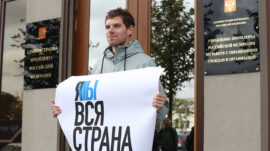 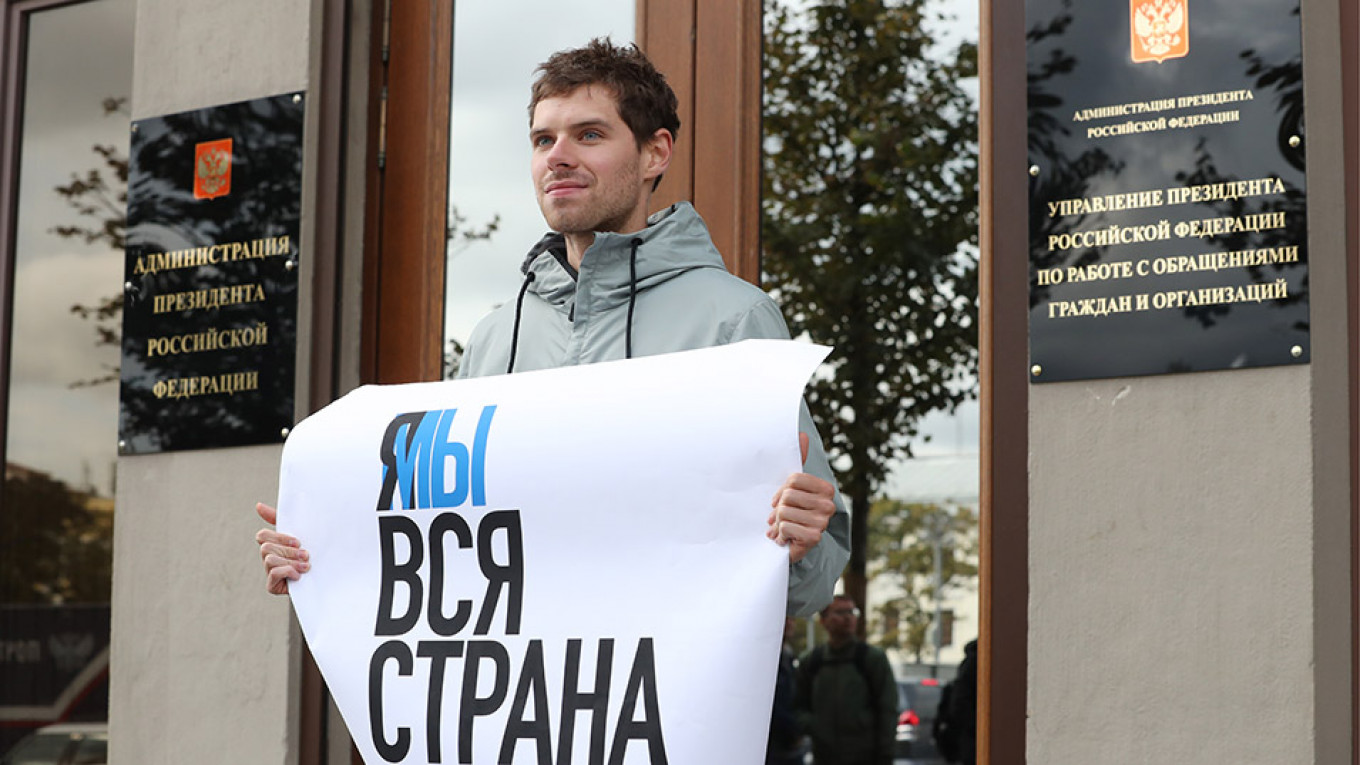 Hundreds of people have lined up for single pickets outside President Vladimir Putin’s administration building in central Moscow to support an actor who was jailed for using violence against a policeman during one of this summer’s unauthorized election protests.

Pavel Ustinov’s sentencing to 3.5 years behind bars Monday for allegedly dislocating an officer’s shoulder while resisting detention during an Aug. 3 protest has triggered a growing public backlash. Russian celebrities have followed actor Alexander Pal’s call to action to speak out in support of Ustinov, using Instagram videos, curtain calls and late-night television jokes.

Live television footage Wednesday morning showed Pal standing outside the presidential executive office in central Moscow’s Kitai-Gorod district with a poster demanding Ustinov’s release. A crowd including actors, directors and citizens lined up nearby to take turns holding the poster one by one — the only legal form of unauthorized protest in Russia.

“Our friends and colleagues say this isn’t only Pavel’s case, but also a case of all those detained and convicted,” Pal said in an interview with the independent Dozhd news channel.

The line of protesters mirrored this summer’s single pickets protesting the June detention of investigative journalist Ivan Golunov. Actors have adopted the slogan “I/We Are Pavel Ustinov,” borrowing from the campaign in support of Golunov, who was jailed on drug trafficking charges but quickly released after the case drew mass public outrage. At Wednesday’s single pickets, participants also held signs saying “I/We Are The Whole Country.”

Ustinov, 23, denies injuring anyone or taking part in the protest, saying he was waiting for a friend near a metro station when he was approached by police on Pushkin Square.

His case has catalyzed a rare show of defiance among Russian celebrities and support from unlikely figures, including deputy senate speaker Andrei Turchak, whom prominent journalist Oleg Kashin implicated in a brutal 2010 attack.

A petition calling for Ustinov’s release has received nearly 100,000 signatures since it appeared online Tuesday.

The Kremlin has “taken note” of the public outcry over Ustinov’s case, spokesman Dmitry Peskov told reporters Wednesday. The RBC news website quoted him as saying that only a legal appeal could change Ustinov’s sentence.