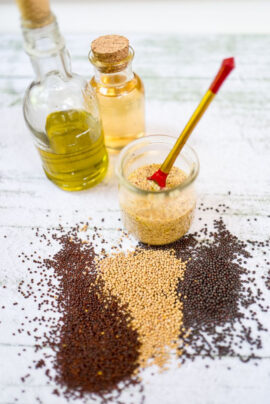 Russian cuisine’s reputation as bland is infamous: from the beloved tongue-twister, which proclaims that “buckwheat kasha and cabbage soup are all we eat,” to the horror stories of Soviet-era stodge and deprivation. There are those (and, once upon a long time ago, I counted myself among their number) who maintain that only the imported flavors of the neighboring “near abroad” cuisines perk up the relentless march of boiled meat and flavorless kasha.

But a closer look reveals two ancient native condiments, which completely refute these claims: horseradish and mustard. Though they may lack the blaze of chili peppers, the alchemy of saffron, or that curious fusion of umami and citrus that is sumac, horseradish and mustard are essential flavors in Russia’s cuisine, and we ignore them at our peril. These two stars with their unique and robust flavors find their way into many of the staples of Russian cuisine — and culture — in ways that may surprise you.

Mustard has spiced things up since Biblical times, and its culinary and medicinal uses made it much-prized by the Romans, who spread the hardy plant and its seeds far beyond its native Mediterranean basin.

Mustard seeds were a commodity the traders of antiquity prized. Any spice used in both medicine and cooking would always be in great demand. Mustard seeds are also light, and if kept dry, long-lasting. Ancient cooks learned to discern the difference between the seeds’ colors and their properties: yellow seeds are mild and slightly bitter, brown and black seeds have more heat and bite. They also mastered the secret of releasing mustard’s potent flavors: the oil and enzymes, which contain the flavor, are activated only when they come in contact with water: cold water will unleash a stronger flavor than hot water.

The ancients also made good use of mustard as an effective medicament. Mustard compresses were popular remedies for respiratory complaints and to this day, Russian pharmacies carry gorchichniki, or small packets of mustard powder.  Activated by water, and placed over the lungs, they stimulate blood circulation by dilating capillaries and encourage the expectoration of mucus.

Mustard gets its name from “must,” a combination of grapes and their stems and leaves, combined before yeast is added to turn the mixture to alcohol. This is often added to mustard powder to activate it, particularly in France. In Russian, mustard is called “gorchitsa” from the verb “gorit’” meaning to burn. The name is apt: this is no namby-pamby mild yellow mustard in a plastic bottle, but a robust and spicy condiment full of flavor and heat. Whole mustard seeds are an essential ingredient in pickling brines, and they make marvelous pickles that spice up a platter of smoked fish, a cheese board, or as an accompaniment to roast pork or sausages.

Though mustard seeds were prominent in Kievan Rus, thanks no doubt to the pre-Mongol close trading ties with Constantinople, prepared mustard really entered the Russian culinary world thanks to the Moravians of Herrnhut, who settled the Lower Volga in the eighteenth century at the invitation of Catherine the Great. This was a win-win arrangement for the ambitious Empress who needed a buffer zone between her expanding empire and the maurading steppe tribes and for the proselytizing brotherhood, who hoped to bring Christianity to the local Kalmyks, Kazakhs, and Tatars. The canny Empress no doubt correctly guessed that the tribes were unlikely to convert, but she was delighted to give the Germans swaths of chernozem (black earth) in exchange for their presence just inside her borders.

While the Moravians were unsuccessful in their efforts to bring Christianity to local peoples, Russians owe them an eternal debt of gratitude for introducing potatoes and prepared mustard. The Moravians named their Volga settlement after the Biblical town of Zarephath, or “Sarepta,” in Russian, and in 1810, they opened Russia’s first prepared mustard factory, which can still be seen today in the Old Sarepta Museum complex, which miraculously escaped destruction during the Battle of Stalingrad.

Sareptskaya Mustard’s popularity spread quickly, and it is in no danger of dwindling today; its robust combination of brown and yellow powdered mustard seeds, vinegar, sugar, and spice blend is an excellent flavor enhancer for meat, particularly beef and pork. Tempered with honey or dairy, it becomes a lighter sauce for salads, fish, and vegetables.

Only the horseradish knows

Horseradish has been around in Russia as long — or perhaps even longer than mustard, and thanks to its phallic-like silhouette, the Russian word for horseradish —  “khren” — means far more in the Russian lexicon than a member of the Brassicaceae family.  “Only the horseradish knows!” is often heard as an expression of frustration in response to an impossible impasse, and something that is “horseradish-y” is irretrievably flawed. The English and French notion, “to each his own,” is rendered in Russian by the notion that the “horseradish is no sweeter than a radish.”

Horseradish is plentiful in Eastern Europe, where the root finds its way into sauces, garnishes, flavored alcohol, and flavored butters and sour creams.  Horseradish plays incredibly nicely with root vegetables, and regular readers of this column will know that I often slip in horseradish to traditional Russian salads to boost their flavor, and very few pots of soup escape my stove without a spoonful of horseradish. When combined with dairy, horseradish mellows slightly, making it the perfect foil for roast beef or pork. This is perhaps why prepared horseradish is always found in Western grocery stores in the dairy section.

Unlike mustard seeds, horseradish root is activated as soon as it is grated: the finer the grate, the more potent the strength.  Combining horseradish with vinegar and salt neutralizes the isothiocyanate and stabilizes the flavor.

The health benefits of horseradish are legion and the condiment is said to help with kidney and urinary tract complaints, respiratory complaints, and joint swelling.

Prepare your own Russian horseradish and mustard

Mustard and horseradish are simple to concoct in your own kitchen and will last up to six weeks in the refrigerator. The most famous way they come together is in Russian Dressing which is popular throughout the world as the perfect accompaniment for burgers and salted meat delicacies such as Pastrami or a Reuben sandwich.  I’ve included my version of Russian dressing below, but the fun doesn’t stop there: consult the recipes below, and then combine the condiments with other pantry staples to enhance countless dishes.

Note: this is one of those moments when our ancestors would have given their right arms for a food processor.  By all means, use one!  If you don’t have one, then take the precaution of onion goggles (what, you don’t have onion goggles?) — swimming goggles or a ski mask will work in a pinch — if you plan to grate the horseradish on a box grater.

*I discovered this highly unorthodox trick in the late, great Kingsley Amis’s invaluable work, Everyday Drinking. I was skeptical at first, but no longer. Try it.

Combine all the ingredients in a blender or food processor fitted with a steel blade.  Process until smooth.