Culture | On and Off the Trans-Siberian Train: The Drag Racer
RssMail

On and Off the Trans-Siberian Train: The Drag Racer 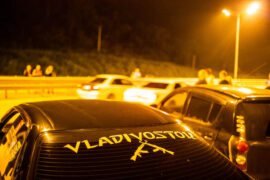 I was born on Sakhalin. I’m a drag racer. The culture of drag racing came to us from the USA. It’s simple: two cars line up, then race for a quarter mile (402 meters). The faster car wins. A time under 10 seconds is considered to be fast, speeds get up to 290 km/hr. In Russia, drag racing is illegal.

I don’t come from a rich family, I’m a child of civil servants. My mom worked her whole life as a city administrator, and my dad was a policeman. He is the reason I got addicted to cars since in childhood. He had a lot of cars. One day my brother and I tried to calculate how many, and we settled on forty. We illegally began driving from age 13. On public roads. The Russian reality is all about taking advantage of the opportunities you have.

I remember this feeling, the first time I sat behind the wheel. I begged my dad for a long time, “Dad, let me drive”. He doubted it at first, but then one moment he turned to me at the parking lot and said “Do you want to start driving? Come on”.

My first experience was in a Land Cruiser. This was a big jeep, so I had to put a pillow under my butt to see over the wheel. I sat in the driver’s seat, put my pillow beneath me and he showed me how the car functioned. We drove in one circle and he said “That’s all, you take a car for a ride now. I have some things I need to finish at home”. He left me alone after one lap in the parking lot. For three months I went back to that parking lot each month with my dad to do a lap. I enjoyed it. Often we would get water from the spring, and one day we forgot to do it and my mother yelled at us. My dad came to my room, gave me the key and said “The bottle is in the car, you know where the spring is, go. If you need something, call”.

When I was deciding on a university after high school, I was looking for a major to work with cars. I graduated with a mechanics degree from Vladivostok State University of Economics and Service. I went to work as a mechanic at an auto shop. The year that I graduated, I managed to save money and buy myself my first car – a 1993 Toyota Mark II. I met a friend who introduced me to drag racing. I started going to races, and it inspired me to improve my own car: increase the power and improve other specifications. I gave the car a name: “Blackbird.” I spent days at the site, bought many parts, ordered and installed them. With every new component the car got better and better. It was getting more powerful, but that wasn’t enough for me.

It was winter time when the crisis hit. There was a 2.5x increase in the currency exchange, and all the parts I was buying were imported. My car was completely disassembled, one engine sold, the second bought. And we were just stuck. It was like my feet were covered in asphalt. I was so upset that I didn’t drive for two years. I was saving money to put the car back together properly. There was a lot to be changed for it to compete against the most powerful cars.

2007 was not a good year for me. From the beginning of the season it was breakdown after breakdown. In 2018 I made a difficult decision. I decided to sell my car. At that time I was tired of all this, I had an idea of buying a finished, assembled project and driving it. I put my car up for the astronomical price of a million rubles, as they would say in our circles. The car didn’t sell for two months, so I decided to sell it for parts: I took it apart and sold them. My girlfriend was even more worried than me. She saw how difficult it was for me to take my car apart, and she said, no, you should not do it. But as a result, instead of the million that I wanted for the finished car, I earned 1.6 million.

I bought the car I have now from Sergei, who also loves to collect cool cars. When one of our drag racing friends is selling a car, we want it to be in good hands.There are situations when a young man, a daddy’s boy, who has money buys this kind of car without ever having to deal with it, and then accidents occur. We always try to get these cars to good people who know what they are doing and who take a good care of it. I race in this car – I constantly drive illegally in the city.

This is an illegal movement. The police often comes, they disperse us, but sometimes we manage to come to an agreement with them. We would like this to become legal and leave the streets – to avoid conflicts with the authorities and misunderstandings with ordinary citizens.

In 2014 there was a huge epic fail. It all started with the usual dispute when our guys went to the old airport terminal to race. The police came and did not let them ride one weekend, then the second. “That’s fine, we won’t race here, we’ll race in the city”. It was simply unrealistic: a very large number of people gathered – two thousand! – and two young people were about to race in the most famous place – Aleutskaya Street, near the FSB building and Ocean Avenue. The police were helpless. They tightened the screws on us way too much and the whole situation blew up.

The authorities understand very well what is going on, and they know that the development of the drag racing movement is irreversible. We would like to become legal eventually. Firstly, it’s the safety of people. Big crowds attend racing events, although we try not to make massive announcements. Sometimes people who come here as spectators relax, get drunk and, as a result, get into tricky situations.

Second, it is a public road. We hang up bags and tell people to pick up their garbage. We also have preventive conversations with some guys in the city, who drive arrogantly and start racing right in Vladivostok downtown. We are trying to help the authorities to move racing away from the city.

When I was younger, I allowed myself to play around in regular traffic. Now I look for a free section of the road, where there are no cars at all. That’s where I go for high speeds.

When I race, it’s a moment of complete freedom. My head is empty, not clogged with the everyday routine. I feel free. I catch the buzz. The fastest I ever went is 298 kph. I haven’t broken the 300 kph barrier. Yet.