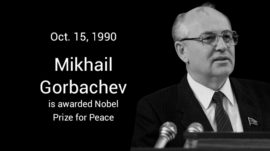 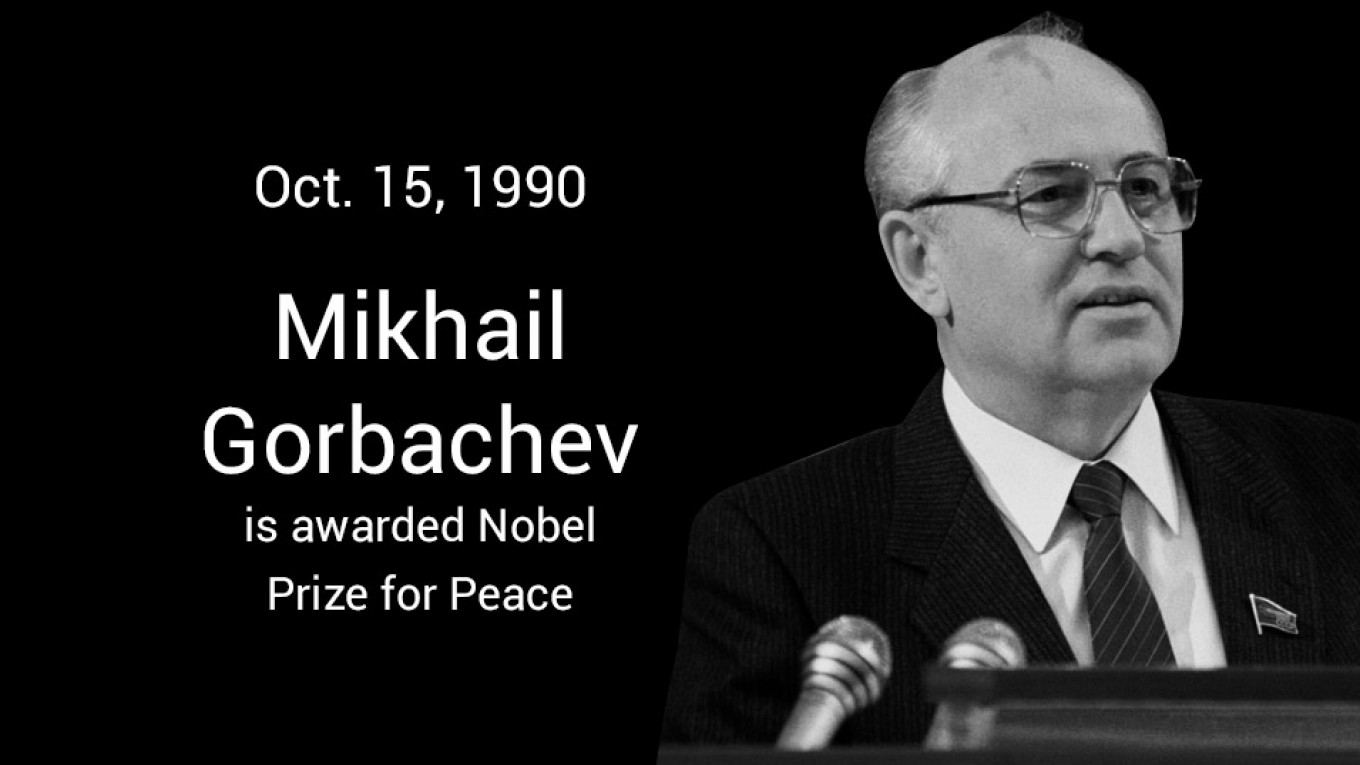 On this day in 1990, the Norwegian Nobel Committee awarded the Nobel Peace Prize to Mikhail Gorbachev, then president of the U.S.S.R., “for his leading role in the peace process which today characterizes important parts of the international community.”

By that time, Gorbachev had withdrawn Soviet troops from Afghanistan, had not interfered in the fall of the Berlin Wall and liberation movements in the “Soviet bloc” nations of Eastern and Central Europe, and was negotiating with the United States to limit and cut nuclear arms. Domestically, his policies of glasnost and perestroika were freeing up the population and sparking liberation movements in many of the Soviet republics. Although some economic reforms were also instituted, they were incapable of improving living standards, spurring production, and bringing the Soviet Union’s economy up to world standards.

Unable to accept the award in person, Gorbachev sent his first deputy foreign minister, Andrei Kovalyov, to receive the award in his stead. Kovalyov read a short speech on Gorbachev’s behalf, which noted, in part, that “the year 1990 represents a turning point. It marks the end of the unnatural division of Europe. Germany has been reunited. We have begun resolutely to tear down the material foundations of a military, political and ideological confrontation. But there are some very grave threats that have not been eliminated: the potential for conflict and the primitive instincts which allow it, aggressive intentions, and totalitarian traditions.”

In June 1991, Gorbachev traveled to Norway to deliver a longer talk. He spoke about the Union Agreement, scheduled to be signed that summer, which would put relations between the constituent Soviet republics on new footing. In his talk, he highlighted a few of the achievements of the past six years: “The Cold War is over. The risk of a global nuclear war has practically disappeared. The Iron Curtain is gone. Germany has united, which is a momentous milestone in the history of Europe. There is not a single country on our continent which would not regard itself as fully sovereign and independent.

“The U.S.S.R. and the U.S.A., the two nuclear superpowers, have moved from confrontation to interaction and, in some important cases, partnership. This has had a decisive effect on the entire international climate. This should be preserved and filled with new substance. The climate of Soviet-U.S. trust should be protected, for it is a common asset of the world community. Any revision of the direction and potential of the Soviet-US relationship would have grave consequences for the entire global process.

“The ideas of the Helsinki Final Act have begun to acquire real significance, they are being transformed into real policies and have found a more specific and topical expression in the Charter of Paris for a New Europe 3. Institutional forms of European security are beginning to take shape.”

But on Aug. 19, the day before the Union Agreement was to be signed, some of his ministers held him under house arrest and organized a coup. The coup was stopped, but the center could not hold the country together. Every Soviet republic except for the Russian Federation seceded from the U.S.S.R., and Gorbachev resigned the presidency on Dec. 25, 1991.