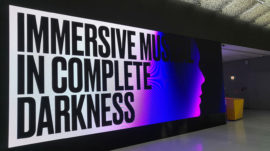 The lights go off, and a soft gasp washes over the crowd of about 250 people standing in a theater as we’re plunged into pitch-black darkness.

A voice over the loudspeaker issues instructions, and so I put my left hand on the left shoulder of the girl in front of me, and she puts hers on the person in front of her. We slowly shuffle forward in a line until we’re told to stop, and each of us tentatively reaches down to find our seats. With our vision gone, we only have our senses of sound and touch to navigate.

After a few minutes, a softly hummed melody emits from a speaker above. Moscow’s first musical in the dark has begun.

“Svet Vnutry,” or “Light Inside,” tells the story of Sveta, a young woman who wakes up in a fairy-tale world where no one can see, and Timon, the messenger who helps her find her way back to her sighted home.

Its organizers say it’s the first musical of its kind in the world, engaging the viewer’s senses of hearing, smell and touch in lieu of vision to help foster understanding of what life is like for the blind.

“About 80% of our perception of the world is formed through our vision,” said Tobias Raisner, the musical’s co-founder from Germany. “When you turn off your eyesight, your other senses become sharper: hearing, tasting, smelling, touching, temperature perception. [In our musical] we’re focused on that 20%.”

“Darkness is a completely new sensation and a new experience,” said Alisa Solovyeva, the actress who played Sveta. “It would seem that it takes away so many possibilities from the theater … but in fact, it helps us remove our outer shell. In the dark, people become what they truly are.”

Two of the show’s 22 actors and musicians have vision impairments, and 18 blind guides assist the audience in the lightless theater. It didn’t appear that anyone in the crowd at Saturday’s performance, a mix of Moscow’s middle and upper-middle class, had sight impairments.

The story helps communicate what life is like for non-sighted people in a way that a normal concert couldn’t, Raisner said.

“We’re working with many little things that sighted people often don’t think about or pay attention to,” he said. “That’s the powerful thing about darkness — it shifts the paradigm.”

“We want to showcase that there is nothing to be afraid of and that a life without eyesight can be as attractive and fulfilled as a life with eyesight,” he said.

“Theater should start conversations and ask questions, and not just be entertainment,” said Sergei Smolin, the actor who played Timon. “Our performance, despite the ‘lightness’ of the story, asks a question to everyone who hears it. If you open your mind to these questions … then I’m sure that each listener will leave a different person and look differently at the world around them.”

Its score, by German composer Michaela Steinhauer, pulls from an eclectic palette of genres, ranging from classical and folk to jazz and pop. The actors and musicians never miss a note despite performing in total darkness. Because the actors aren’t in motion, the audience is forced to imagine them dancing, touching and interacting using only music, sound effects and the actors’ natural chemistry in their voices as a guide.

All of these things combined result in a production that could stand shoulder-to-shoulder with a Broadway musical. And the variable of darkness — which could easily be a gimmick — is instead an integral part of the story and is ultimately more liberating than constricting.

This sense of professionalism is key when it comes to leaving a lasting impression on the audience, said Denise Roza, the CEO the Perspektiva disability advocacy NGO in Moscow.

“When it’s a professional theater production that’s targeting a broader audience, that’s when it’s most inclusive,” she said. “You want it not to make people feel sorry for them.”

Dialogue in the Dark Moscow employs vision-impaired people to conduct professional development workshops and trainings in the dark. Today, it employs 10 vision-impaired people full-time and many more as consultants in Russia, a country with limited accessibility and even more limited employment opportunities for the blind.

“There are many more resources for non-sighted people today than there used to be, such as audiobooks and libraries for the blind, but accessibility is still far from perfect. Getting around the city is not easy, and people are still not as mobile as they could be.”

Russia’s Convention on the Rights of Persons with Disabilities (CRPD), ratified in 2012, requires that people with disabilities have equal access to quality inclusive education and vocational training, as well as supplementary services to help close the education gap.

But Russian children with vision impairments are often sent to segregated schools and struggle to gain the skills needed to find jobs once they reach adulthood, Human Rights Watch says.

“Even blind people with higher education and who know English can’t find jobs,” Roza said. “We tell companies about software developed for the vision-impaired to be able to work at a computer, but there’s not much willingness to switch. It’s harder for people with visual impairments to get jobs than it is for deaf people.”

Roza hopes that performances like “Light Inside” can help show the public that people with vision impairments have more professional possibilities than sighted people might imagine.

And over the weekend — as Moscow audiences saw exactly how much they could perceive, understand and do with their eyes closed — their eyes were opened in an entirely different way.

“It’s hard for me to imagine how blind people live, although I try as much as possible to relate to their experience,” said Zarina Asfari, who attended the musical. “The musical is called ‘Light Inside,’ and this title is 100% reflective of its content. … [Its message is that] if it’s so dark around you that you can’t even see the stars, only inner radiance can illuminate life and restore its meaning.

“‘Light Inside’ turns the game around: It offers the chance not to sympathize with people deprived of the gift of sight, but to learn from them about having an inner vision.”