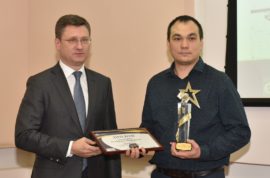 On December 17, 2018, an award ceremony for the Energy of Modern Russia national photography contest took place at the Ministry of Energy in Moscow. The event was attended by Alexander Novak, Minister of Energy of the Russian Federation.

The contest was organized by the Ministry of Energy of the Russian Federation. The jury included heads of Russia’s leading media outlets. The participants competed in the following categories: Historical Photograph; Nature’s Eye; Master Craftsman; A Day in the Life; Innovations; Faster, Higher, Stronger; Rare Snapshot; and Young Talent. A total of 958 photos from 140 entities were submitted in the competition.

Danil Khusainov, photojournalist from Gazprom Dobycha Yamburg, took first place in the Innovations category with a photo entitled “Exercises.” The category showcased technical progress in the fuel and energy complex.

Danil Khusainov took the award-winning photo during a drill at a gas field. In the course of the drill, Gazprom Dobycha Yamburg’s emergency response units honed their skills in interacting with medical professionals and firefighters. The photo depicts a shooting powder cannon, a device employed in emergencies at gas well clusters.

Gazprom Dobycha Yamburg is a wholly-owned subsidiary of Gazprom. It operates in the Yamal-Nenets Autonomous Area.