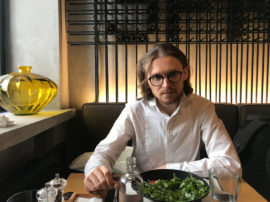 It was Saturday afternoon and Mikhail Svetov was buzzing with nervous energy. Just 24 hours later, the member of Russia’s Libertarian Party would be leading a protest against a draft bill aimed at creating a so-called sovereign internet.

“I see signals that something unusual is happening. Something similar to 2011,” Svetov said, referring to the Bolotnaya protests against rigged elections and Vladimir Putin’s rule, as he picked at an arugula salad at a cafe just steps from the Kremlin. “It’s the only other time that comes to mind when a nonpolitical audience was interested.”

But if those winter protests of 2011-12 were still ultimately about politics, the current simmering dissatisfaction over internet freedom is something that could concern anyone. Last May, when communications watchdog Roskomnadzor moved to block the popular messaging app Telegram, some 12,000 Russians turned out to a protest Svetov organized — which, he is eager to point out, was last year’s largest street demonstration.

Nearly a year later, the authorities have been unsuccessful in their attempts to block the messenger. But last month, a draft bill passed the first of three readings in the State Duma that would require Russian internet traffic to go mostly through domestic routers and exchanges. Critics like Svetov say the bill could give the government the sweeping ability to censor online content and, going forward, actually be able to block apps like Telegram. 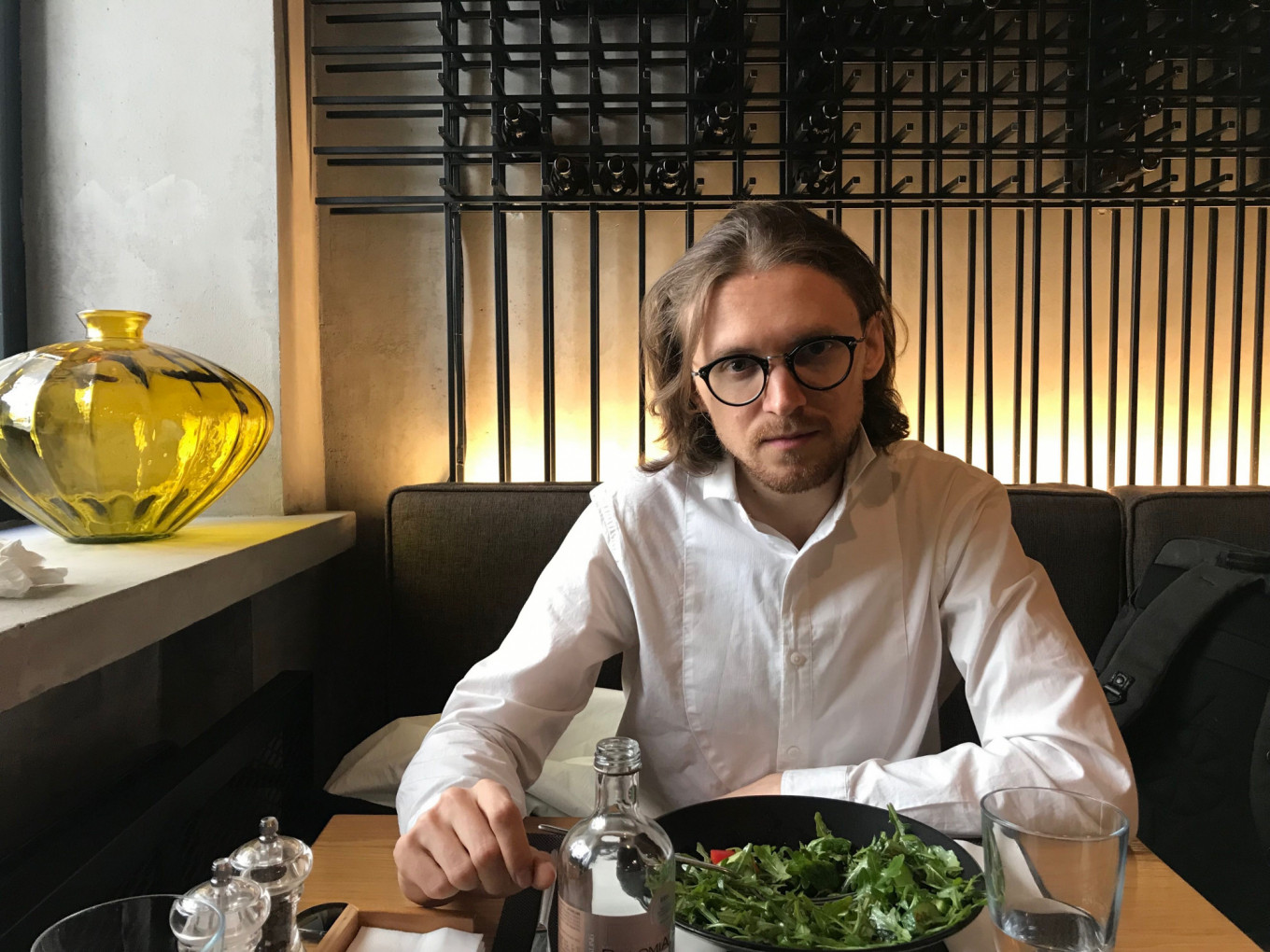 Svetov believes the new law was written to target opposition leaders like Alexei Navalny who have found success on YouTube. Evan Gershkovich / MT

Svetov, 34, is still a relative newcomer to the Russian opposition scene. During the mass protests of winter 2011-12, he was in England getting his degree in political science. He then lived in Japan and New Zealand, where he worked in film, before coming home in 2016.

Since his return to Russia, he has built up a sizable following on social media: His YouTube channel, through which he discusses the social and political topics of the day, has garnered more than 100,000 subscribers.

With the state quashing independent media in recent years, YouTube has become an increasingly popular tool among opposition activists seeking out audiences. The platform is now viewed by 82 percent of the Russian population aged 18-44, as The Economist reported last week. In spring 2017, opposition leader Alexei Navalny took authorities by surprise by using his YouTube channel to inspire thousands into the streets for the first mass protests against the Kremlin since 2012.

While Navalny on Saturday afternoon tweeted that he couldn’t attend Sunday’s protest — which was co-organized by Leonid Volkov, the chief of staff for his 2013 Moscow mayoral campaign and his 2018 presidential campaign attempt — he “urgently” called for the public to attend.

Many obliged. According to White Counter, an NGO that tallies up participants at rallies using metal detector frames, 15,300 people on Sunday came out to the rally. Interior Ministry estimates cited by Interfax put the number of participants at 6,500.

On social media, photos circulated of people still waiting to get in as the meeting was coming to an end. “It’s big,” Svetov excitedly told The Moscow Times at the scene.

Near the stage on a barricaded section of Akademika Sakharova Prospekt in central Moscow, named for one of the Soviet Union’s most famous dissidents, Svetov paced in circles as he waited his turn to address the gathered crowd. Before him spoke fellow members of the Libertarian Party; Sergei Smirnov, editor of the Mediazona outlet founded by Pussy Riot members; and a host of advocates for Russian internet freedom.

Then Svetov jumped on stage, pacing from end to end. “The authorities have no interest in having a dialogue with us, so we need to learn how to defend our own interests,” he yelled to applause.

The day before, Svetov had predicted the protest would be sizable because of his outreach efforts beyond established media outlets. He noted social media posts by Russian influencers like Yelena Sheidlina and a trending YouTube announcement by stand-up comic Danila Poperechny.

He also attracted high-profile guests. On Sunday, the IC3PEAK techno group, which gained fame after it was caught up in a wave of restrictions on musicians in Russia over alleged extremism, closed out the afternoon with a short performance. 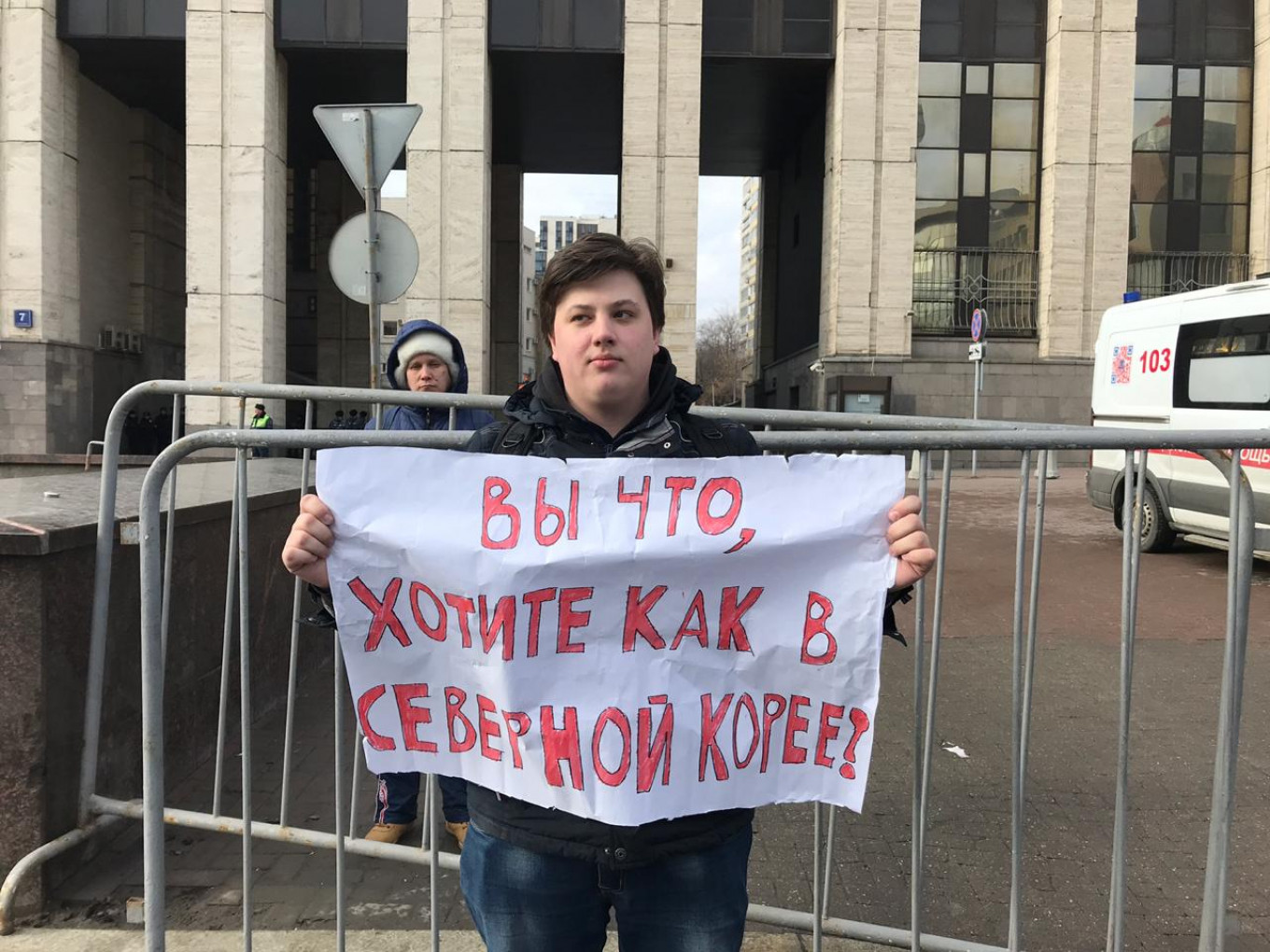 Alexei, 22, said he would likely emigrate if Russia cut itself off from the global internet. Sign reads: “You what, want it to be like in North Korea?” Evan Gershkovich / MT

A number of protestors who spoke to The Moscow Times said they were newcomers or had only been to a handful of demonstrations since first attending the Telegram block protest last May. Despite the protest having been allowed by the authorities, as many as 30 people were detained according to the OVD-Info police-monitoring website. At least three were minors, including one who had to be taken to the hospital.

“If we disconnect from the internet, our country won’t be able to develop,” said Oleg, a 28-year-old IT specialist who was attending his first protest and declined to give his last name. “I want to raise my kids here but it’s getting quite scary.”

On the eve of the protest, political analyst Yekaterina Schulmann said that if organizers could get more than 15,000 to attend, the authorities would pay attention when adopting corrections later this month before the bill’s second reading.

“There is no doubt that the bill will be adopted,” she said. “The question is what provisions will actually remain in the law by the time it comes into force.”

Even if the law is adopted without changes, however, Russian internet experts doubt that Russia could create anything similar to China’s Great Firewall.

When news that Telegram would be blocked came out last year, Karen Kazaryan, chief analyst of the Russian Association of Electronic Communications, told The Moscow Times that the authorities would fail. He predicts the plan to create a way to cut Russia’s internet off from the rest of the world’s will likewise fall through.

“They’ll mess around for a long time and they’ll spend a lot of money on it,” Kazaryan said. “But in the end it won’t work. Russia is not China. It’s very complex and expensive to build a system like this and we simply don’t have the engineers to realize this project.”

Putin Wants What China’s Xi Already Has: His Own Internet

Svetov, however, believes not taking the authorities seriously would be a “grandiose mistake.”

“You can make an encyclopedia out of articles written arguing the Kerch bridge couldn’t be built,” he said, referring to the bridge connecting Russia to Crimea that was completed last year. “Well, they built it, and they hosted the Olympics successfully and so on. They carry out infrastructural projects perfectly when they realize that their power depends on it.”

Advocates argue that the internet sovereignty project would enable Russia’s internet network to continue working if a foreign power cuts the country off from foreign servers. But critics warn that there are ulterior motives to the plan.

Andrei Soldatov, the author of “The Red Web: The Kremlin’s Wars on the Internet,” told The Moscow Times that the purpose of the law is to “deprive the mobilization power of the internet for bringing the disgruntled to the streets,” like when the authorities cut off internet service in Ingushetia when protests roiled the Muslim-majority republic in September. “To do this, you must have the option to turn off the internet,” he said.

For his part, Svetov believes the new law was submitted to target Navalny and people like himself who have found success on YouTube. If the legislation is passed, he believes that Russia will hit a “point of no return.”

“It’s easy to get rid of me because I will fight to the point that I can, but I will have to quit if I am threatened with a 10-year prison sentence,” he said on Saturday. “But there will be new people after me. I am much angrier than the people who came out to Bolotnaya Square in 2011. After me, the next wave will be even angrier. So my message to the authorities is simply this: Keep that in mind.”