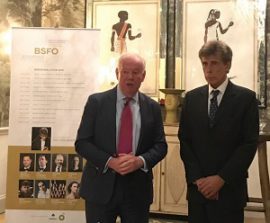 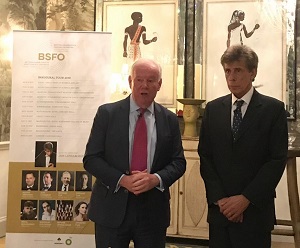 A presentation of the unique Russian-British Britten-Shostakovich Festival Orchestra has taken place in London, the formation of which was inspired by the friendship of two great composers of the 20th century—Dmitry Shostakovich and Benjamin Britten. The initiative is supported by Rosneft Oil Company and BP as part of the UK-Russia Year of Music.

The BSFO was founded and led by Artistic Director of the Kolobov Novaya Opera in Moscow, Jan Latham-Koenig. Jan Latham-Koenig is the first and only British conductor to lead a Russian theatre.

“When creating this Orchestra, we have gathered outstanding young musicians between the ages of 18 and 28. We plan to meet every year for joint performances, bringing together young talents of Russia and the UK. This is one of the few such projects in the world and the first for Russia and the UK. We would never be able to accomplish this without the support of the authorities of the two countries. Tremendous support for the Orchestra was provided by our sponsors—Rosneft and BP. These two companies have a long history of cooperation. And the way they supported us to bring this project to life is an outstanding achievement on their part. The Orchestra is breaking down the barriers between the two countries,” BSFO Chairman Charles Hendry said.

“I took the responsibility to establish the first of its kind orchestra that brought together outstanding Russian and British musicians. It took us a year and a half. We are confident that this project will have huge success and contribute to the strengthening of cultural ties between Russia and Great Britain. After all, music is an international language, a language that unites,” BSFO conductor Jan Latham-Koenig said.

In September 2019, the Orchestra will take its first tour. Performances will begin with two concerts in the Sirius Art & Science Park in Sochi on September 9 and 10. Following those, on September 12 and 14, the musicians will play at the Moscow Tchaikovsky State Conservatory, and the Russian part of the tour will come to its end with a concert in the St. Petersburg Shostakovich State Philharmonic on September 15. The tour in the UK cities will take place between September 17 and 25; the Orchestra will perform in the following succession: Birmingham, Nottingham, Leeds, Manchester, Edinburgh, Basingstoke, and London.

On tour, BSFO will present a musical programme that includes the Suite for Variety Orchestra and the variety poem “Execution of Stepan Razin” by Shostakovich, as well as “Four Sea Interludes” from the opera “Peter Grimes” by Britten. In addition, “The Lark Ascending” and “Fantasia on a Theme by Thomas Tallis” by Ralph Vaughan-William, the suite from “Romeo and Juliet” by Sergei Prokofiev, and “Rhapsody on a Theme of Paganini” by Sergei Rachmaninoff will be performed during the tour. The programme’s performers are, among others, pianist Pavel Kolesnikov and violinist Jennifer Pike, as well as actors Edward Fox and Freddie Fox.