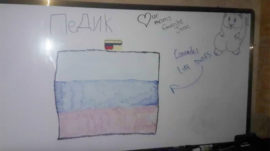 Footage of an abandoned U.S. military base in the town of Manbij in northeast Syria shared by pro-Russian government media shows the haste with which U.S. troops pulled out of the city they had patrolled for a year.

The Russian-backed Syrian army entered Manbij on Tuesday, taking advantage of an abrupt U.S. retreat from Syria after the Turkish incursion, and deployed deep inside Kurdish-held territory south of the Turkish frontier. The United States has “handed over” Manbij to Russia, an unnamed Pentagon official told Newsweek on Monday as Russia announced its military police were patrolling the area.

Photos shared Tuesday by a little-known Russian news group, ANNA, showed wires sticking out of the walls, and snacks and other assorted items lying around the dimly lit U.S. base. Video filmed by a Russian-speaking reporter showed the deserted dining facility, sleeping quarters and the perimeter.

“They took heavy equipment and weapons and got out of here. Everything else stayed behind,” said the man, identified as ANNA’s special correspondent in Syria.

One shot displayed a whiteboard with a Russian flag drawn on it, a homophobic Russian curse word and the English phrase “comrades like dudes” with an arrow pointing to the flag.

“They thought they’d be here for a long time,” the cameraman said, showing fortifications and tents inside the abandoned base.

U.S. news site Business Insider said it spoke with an unnamed Kurdish-led Syrian Democratic Forces official who claimed that the Russian troops in Manbij are mercenaries with the Wagner Group.

Wagner is a secretive company that has been reported to have carried out clandestine combat missions on the Kremlin’s behalf in Ukraine and Syria. Russian authorities have denied that Wagner contractors have ever carried out their orders.

The Syrian army deployments into Kurdish-held territory amount to a victory for Syrian President Bashar al-Assad and Russia, establishing a foothold in the biggest remaining swathe of Syria that has been beyond their grasp for much of the eight-year-old war.

The United States announced on Sunday it was withdrawing its entire force of 1,000 troops from northern Syria. Its former Kurdish allies immediately forged a new alliance with Assad’s Russia-backed government, inviting the army into towns across their territory.

U.S. President Donald Trump’s pullout ended joint U.S.-Turkish patrols of the Manbij area under a deal aimed to persuade Turkey not to invade.

U.S. withdrawal and the Kurds’ deal with Assad, Putin’s closest ally in the region, is widely seen to have boosted Russia’s influence in Syria and the Middle East.