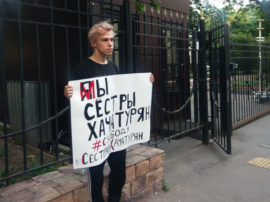 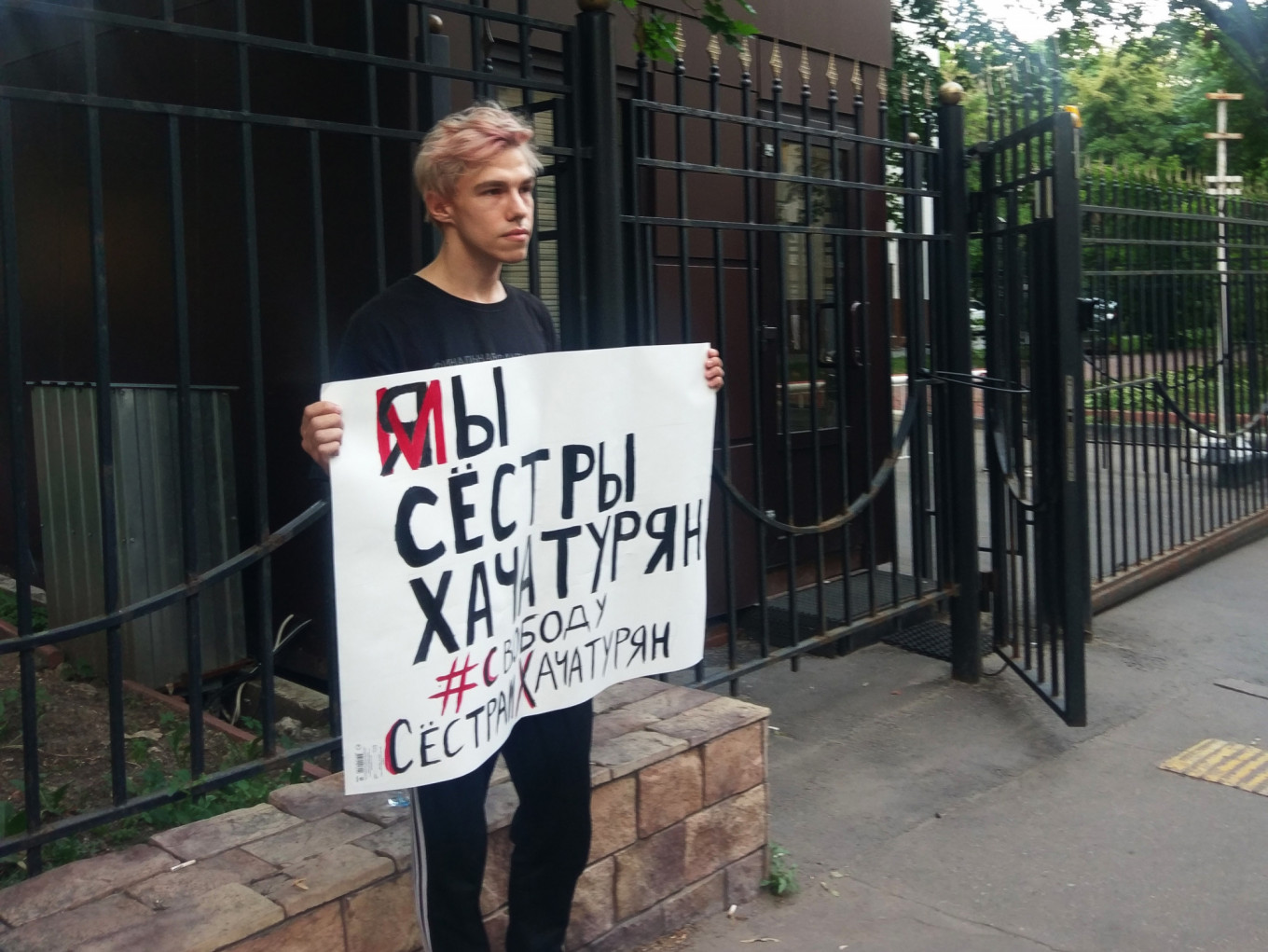 As many as 350 people gathered in central Moscow on Wednesday evening to protest murder charges brought last week against three teenage sisters who stabbed their father to death after he had abused them for years.

Krestina, Angelina and Maria Khachaturyan had been under house arrest waiting to hear what the charges against them would be since the killing of Mikhail Khachaturyan in July 2018, when they were aged 17, 18 and 19. The girls now face up to 20 years in prison.

The case has polarized Russian society, with some seeing the killing as self-defense and others as premeditated murder.

“The investigation established and acknowledged that the father had committed crimes against the girls, including those of a sexual nature, and that their mental health had been harmed,” Angelina’s lawyer Alexei Parshin said in a Facebook post saying that the sisters had acted to prevent further crimes and should not have been charged with murder.

People stood in line outside the headquarters of the Investigative Committee on Wednesday evening with handmade placards to stage single pickets, the only type of unauthorized protest that is legal in Russia.

Some read “The Khachaturyan sisters need rehabilitation, not jail!” and “Necessary self-defense cannot be a crime.” Others said “I/We are the Khachaturyan sisters,” echoing similar protests in support of investigative reporter Ivan Golunov, who earlier this month was arrested on trumped-up drug trafficking charges, then released after a massive outpouring of public support.

“The sisters should be exempted from liability and a criminal case should be opened to posthumously prosecute their father,” said Alyona Popova, a prominent women’s rights advocate. She added that activists would continue to organize pickets and a march in support of the sisters.

But on social media, some commentators are saying that Mikhail did not deserve his fate and that the law should deal with the girls accordingly. Russian women have been deterred from reporting domestic violence since a 2017 law decriminalized most forms of it. Violence against a spouse or children that results in bruising or bleeding but not broken bones is now punishable by 15 days in prison or a fine of 30,000 rubles ($474) if it does not happen more than once a year. Previously, these offenses carried a maximum jail sentence of two years.

The girls’ mother, Aurelia Dunduk, said in an interview with the Novaya Gazeta newspaper in 2018 that she fled the family home in 2015 after her husband threatened to kill her daughters if she did not leave. In the same story, friends and neighbors of the Khachaturyans said they had heard screaming coming from the family’s apartment in the northern Moscow suburb of Bibirevo, and had seen Mikhail beating the sisters.

Moskovsky Komsomolets newspaper cited legal sources saying expert opinion in the investigation had backed the sisters’ claims that Mikhail raped Krestina and Angelina and engaged in other forms of sexual violence.

The sisters are now back under house arrest waiting for the date of their murder trial. Their lawyers have launched appeals and Popova has started an online petition for criminal proceedings to be dropped that has already attracted 130,000 signatures.

Nadezhda, a 41-year-old doctor who signed the petition, said she was supporting women and children suffering at the hands of aggressors who are protected by the law and society.

“This is a marker of the ill health of our society, which is very disturbing,” she said.

The Key Quotes of Putin’s Annual Question and Answer SessionFate of Captured Ukrainian Sailors Must be Tied to Jailed Russians, Putin Says