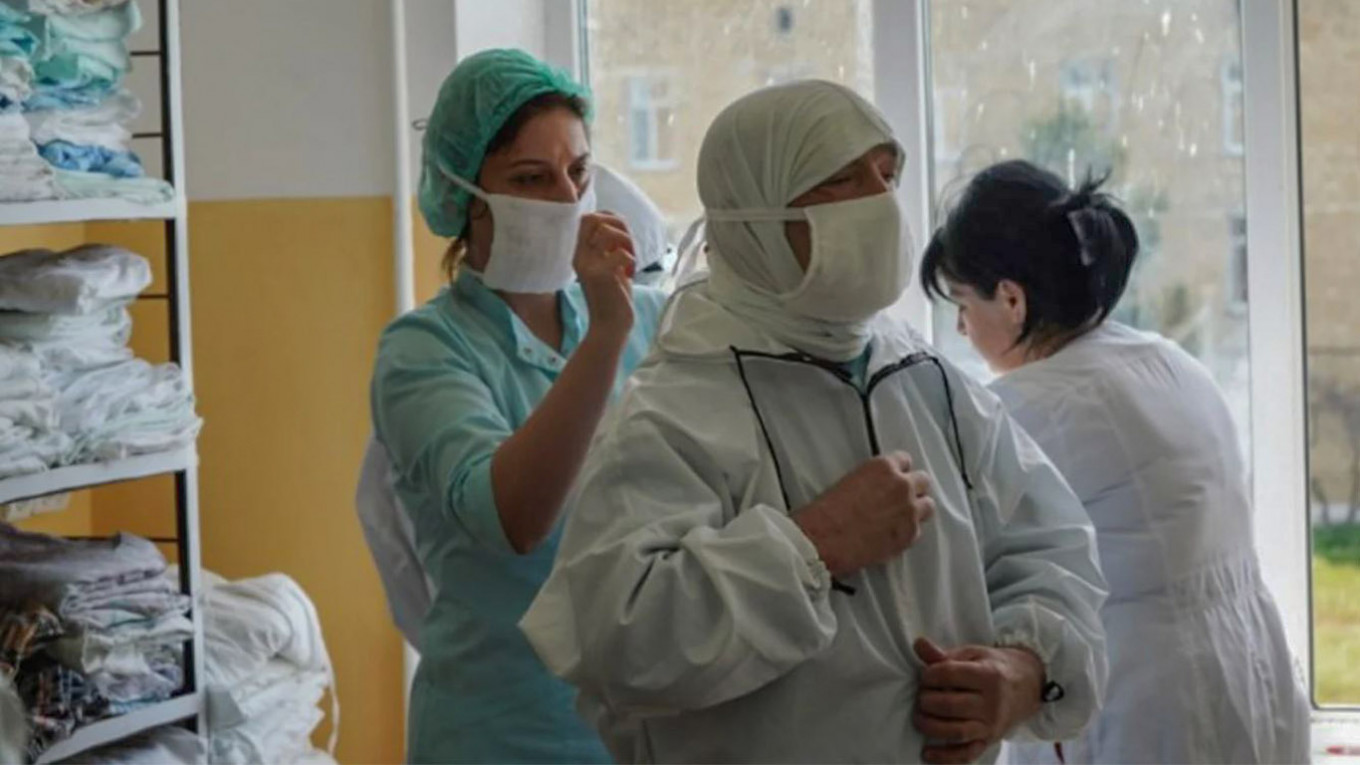 President Vladimir Putin was forced to intervene personally on Monday in the epidemic sweeping Russia’s North Caucasus region of Dagestan, as local officials described the coronavirus situation as a “catastrophe.”

For several days now, there have rumours of mounting fatalities and overwhelmed hospitals in the mountainous majority-Muslim region and local medical staff have taken to social media to make frantic appeals.

Dagestan’s top cleric, Mufti Akhmad Abdulayev, described the situation as dire and pleaded to the Kremlin for help.

“The scope of the catastrophe is forcing us to appeal to you,” he told Putin via video link Monday. “Please, bring your attention to Dagestan.”

The region’s health minister, Dzhamaludin Gadzhiibragimov, said that 657 people had died of pneumonia in the region, including 40 medics.

According to a regional breakdown of Russia’s official coronavirus tally, only 29 Covid-19 deaths have been recorded in the region of 2.9 million people by Monday.

Critics have accused Russian authorities of downplaying the crisis and manipulating the figures by attributing coronavirus deaths to so-called community-acquired pneumonia and other medical conditions.

Medics told AFP they faced shortages of protective equipment and tests, and Abdulayev said that many people with the infection die at home and are buried at mass traditional funerals.

“They are buried according to tradition and nobody counts them,” Abdulayev said.

Putin promised to send aid to Dagestan, and asked residents not to gather for the Eid celebration marking the end of Ramadan this weekend.

“The situation in the republic of Dagestan is complicated and of course calls for additional — and urgent — measures,” Putin said during the video conference.

Doctors told AFP they have been overwhelmed by the number of patients, while the lack of medical supplies had left people in the region feeling abandoned.

Ambulance medic Sakinat Magomedova working in the town of Kizilyurt said there were so many pneumonia hospitalisations in April that “sometimes we didn’t have time to disinfect the ambulance” between calls.

The 45-year-old finally fell ill on April 26 and was diagnosed with pneumonia.

“I couldn’t breathe,” she said. “I really thought I was going to die.”

Despite exhibiting common symptoms of Covid-19, she said she was never swabbed for coronavirus because there were no tests in her town.

“People have been abandoned,” she said.

Another medic who declined to give his name said he has used the same mask for a month, which he washes in chlorine after each shift.

“There is an enormous number of patients. I’ve never seen this before,” he told AFP.

Dagestan’s Governor Vladimir Vasiliev on Monday defended the region’s official coronavirus statistics, but promised to “clarify” the number of fatalities among the region’s medics.

State channel Rossiya 24 reported Monday that Dagestan’s statistics could be distorted because “only 3% of families give consent to autopsies.”

Russia enters fatalities into its national coronavirus tally only after an autopsy has confirmed the infection was the primary cause of death.

“We were faced with total lack of preparation by the healthcare system,” said Ziautdin Uvaisov, who works in a regional aid organisation called Patient’s Monitor.

He said the region did not move fast enough to secure enough tests, or to inform the population about containment measures, adding that locals may be less likely to follow orders.

Tradition in the Caucasus dictates large gatherings for weddings and funerals, and people may have been reluctant to drop the custom despite the rules.

“The population is very suspicious of the authorities and of official instructions,” he said.