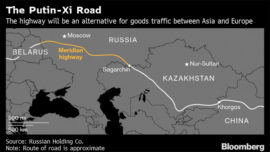 Since then, deep-pocketed Chinese companies have intensified their march across Asia, Africa and beyond, including into Italy, the first Group of Seven member to commit to the project. The speed and scope of the Belt and Road roll out — 125 nations have now signed on in some form — is alarming the U.S. and most of the European Union. They say Xi’s one-party state is fueling corruption and indebtedness to exploit weaker countries for political and even military gain.

Putin is back in Beijing now for the new Silk Road’s second forum and this time, with opposition to Xi’s grand vision growing in the West, he’s bringing more than just bromides. After six years of wrangling, Russia has quietly approved its first project designed specifically for the Belt and Road Initiative — a toll road linking China’s western neighbor Kazakhstan with Belarus, which borders Poland and two other EU members.

“Russia is very important for the Belt and Road, you need its cooperation to achieve success with Eurasian countries,” said Wang Yiwei, a former Chinese diplomat in Brussels who’s now a professor at Renmin University in Beijing. “You cannot bypass Russia.” 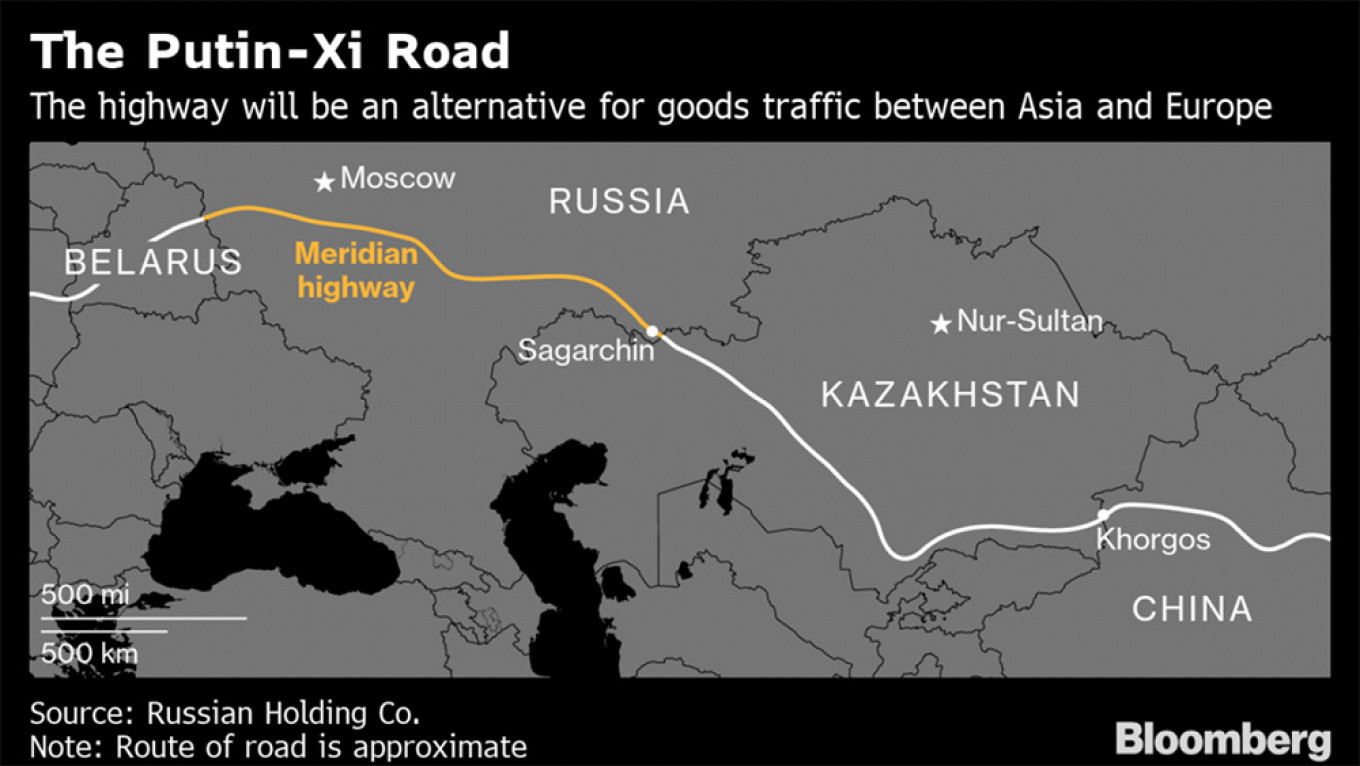 For all of the proposed road’s strategic, if not economic, significance, officials in Moscow say it’s too early to talk about because financing and other details are still being worked out. What little Russia has said about it boils down to a single sentence buried in the 110-page blueprint for Putin’s “National Projects” that was published in February: “By the end of 2024, the Russian section of the Meridian toll highway will be built.”

In Beijing Friday, Putin told Xi that Russia’s relations with China had reached “an unprecedentedly high level” and called Belt and Road “an extremely important initiative.” But he didn’t specifically mention Meridian in his public comments.

The Kremlin’s reticence to discuss what seems to be something of a diplomatic breakthrough — given that Meridian has been on the drawing board since China first unveiled what’s now known as the BRI in 2013 — may be as much about negotiating tactics as it is about offering political cover to an increasingly important ally.

A string of BRI scandals, including in Malaysia and Sri Lanka, and the growing chorus of criticism from the West has prompted China to retool the initiative to keep it on track. Officials and participants at this year’s conference said Thursday that Beijing is taking a range of steps to exert more control over the initiative, including clarifying rules for state-run enterprises, restricting use of the BRI brand and improving auditing and anti-graft measures.

What is known about Meridian is that it would stretch about 2,000 kilometers (roughly 1,240 miles), from the Orenburg region on the Kazakh border to a junction of the existing Minsk-Moscow highway that runs between the Belarusian and Russian capitals. The toll road would shorten trucking routes between cargo hubs in western China and central Europe and may offer a faster, if more exp/p>ive, alternative to the three main rail corridors already in operation, all of which are booming.

One of the many things Russia hasn’t said about its proposed Belt and Road entry is how it will be paid for.

Russia’s state development bank, Vnesheconombank (known as VEB), received a 65 billion yuan ($9.7 billion) credit line from the China Development Bank last year and is considering using part of that to fund construction of the new highway, according to a person close to VEB Chief Executive Officer Igor Shuvalov, who served as Putin’s first deputy prime minister for more than a decade.

“We’re still analyzing, together with the initiator of Meridian, possibilities for structuring and raising funds,” VEB spokesman Andrei Samokhin said. “Given the scale of the project, we consider it expedient to form a pool of investors and lenders, but we don’t exclude the possibility of attracting funding from our Chinese partners.”

The “initiator,” Alexander Ryazanov, a former deputy chairman of gas giant Gazprom, put the initial cost of the project at 594 billion rubles ($9.2 billion), with a break-even timeline of 12 to 14 years. He said his Russian Holding Co. already owns about 80 percent of the land the road would run through.

Russian Holding owns 100 percent of Meridian, but will become a minority shareholder once private investors commit, Ryazanov said in an interview in Moscow. He said he intends to focus on making money off the truck stops, hotels and retail shops he plans to build along the route.

Igor Nikolaev, director of strategic analysis at FBK, a consulting company in Moscow, said Meridian is the kind of project that “ticks all the boxes” for Putin. “It would tie Russia closer to China, strengthen Russia’s role as a transit country and feed investment into undeveloped areas,” he said. “But without China’s full backing it will be impossible to implement.”

That may come down to the personal chemistry between Putin and Xi, who seem to grow closer with each new conflict one or the other has with the U.S., according to Alexander Gabuev, an expert on the Asia-Pacific region at the Carnegie Moscow Center.

“China will want some kind of guarantees of profitability with Meridian, plus the use of Chinese equipment and labor,” Gabuev said. “Of course, Putin can ask Xi directly to waive those demands, but the limit of such requests isn’t infinite. In fact, U.S. sanctions are simply pushing Russia into the arms of the Chinese.”