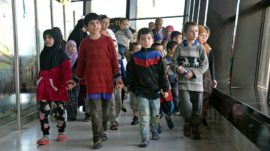 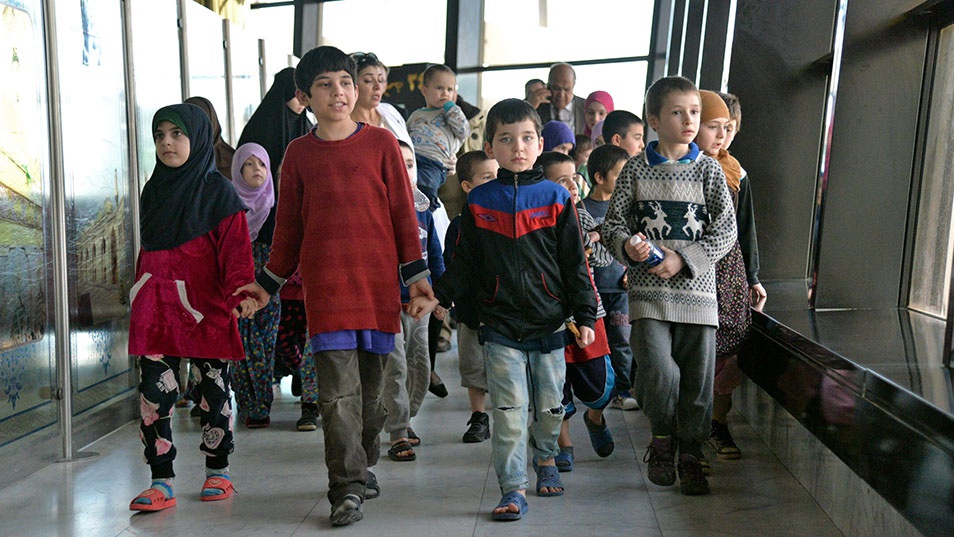 Zalina Gabibulayeva has had five children, four husbands and two jail sentences. All her spouses were Islamist militants who are either dead or in prison, the last two in Syria, where she was among hundreds of women stranded by the war before officials brought her back to Russia.

“I thank God every day that we are here,” Gabibulayeva, 37, said by phone from Grozny, the capital of Russia’s mostly Muslim republic of Chechnya, where she and her children receive about 40,000 rubles ($610) per month in state welfare payments.

While President Vladimir Putin is renowned for his ruthless approach to terrorists — once vowing to “waste them in the outhouse” — Russia has been more willing than many Western nations to help women and children linked with Islamic State fighters to return home from the Middle East. He’s explained the motivation by saying children didn’t choose to go to the conflict zone “and we have no right to leave them there.”

Nearly 100 family members of jihadists in Syria and Iraq were repatriated in late 2017 before Russia’s intelligence service raised security concerns in a country that’s repeatedly been the target of terrorist attacks. Russia’s experience illustrates challenges facing the U.S. and Europe as they decide how to deal with citizens captured in Syria and Iraq who were part of Islamic State.

Governments have been reluctant to take back former fighters, fearful of attacks or efforts to radicalize prison cellmates. While many jihadists were killed, thousands of wives and children are in prisons and camps following the collapse of Islamic State’s so-called caliphate, presenting a humanitarian challenge and a potential future security threat if their fate isn’t resolved.

“Russia’s human rights record is deeply problematic, but it has done a lot — more than Western democracies — on the issue of returns,” said Tanya Lokshina, Human Rights Watch associate director for Europe and Central Asia. “Globally, Russia had the most active program to return detainees from Iraq and Syria, notably children.”

Paradoxically, the program was initiated by Ramzan Kadyrov, the feared leader of Chechnya who was put on the U.S. sanctions list in December 2017 accused of responsibility for “extrajudicial killing, torture and other gross violations” of rights. That same month, Putin backed Kadyrov’s “noble” efforts to rescue children while making no mention of women trapped in the war zone.

The president’s endorsement offered an important signal to Russia’s estimated 25 million Muslims, the country’s second-largest religious group. The Kremlin has worked hard to retain the loyalty of Europe’s largest Muslim minority while fighting home-grown militants in Chechnya and neighboring areas of the North Caucasus. Still, women brought back from the Middle East are kept under surveillance by the security services and often have to give speeches denouncing their involvement with Islamic State to deter others from extremism.

Kadyrov got involved in the issue to “emphasize his leadership among Muslims in Russia,” and improve his public image through opposition to Islamic State, said Grigory Shvedov, who heads the Moscow-based Caucasian Knot research service.

In all, 21 women and 105 children returned to Russia, according to Kheda Saratova, a Chechen human rights activist. Officials organized 11 flights from August 2017 to February last year and the initiative resumed after a 10-month pause on Dec. 30, when a plane from Iraq brought 30 children a/p> three to 15, sent by their imprisoned mothers to relatives in Russia.

Only children were accepted after November 2017, following warnings by Federal Security Service Director Alexander Bortnikov about terrorism risks posed by adults. Russia is a target for Islamic State, particularly since Putin sent his military to intervene in the Syrian war in 2015 in support of President Bashar al-Assad’s forces.

Kremlin Commissioner for Children’s Rights Anna Kuznetsova, who was on December’s flight, said that Russia plans to bring about 40 minors from Iraq in February.

“Now it’s not Kadyrov or someone else, it’s Russia that’s taking responsibility for these children,” said Alexei Malashenko, a senior analyst at the Berlin-based Dialogue of Civilizations research group co-founded by a longtime Putin ally.

“Russian and Chechen authorities conducted the largest number of confirmed repatriations for minors,” said Gina Vale, a research fellow at the International Center for the Study of Radicalization at King’s College, London, who co-wrote a study of the global response to the crisis.

While Islamic State trained children to commit violence, there have been no cases so far of attacks by returning minors and abandoning them in conflict zones risks creating security threats when they become adults, she said. “This is an immediate problem requiring an immediate response from foreign governments,” Vale said.

Russia has no treaty with Syria or Iraq that allows the transfer of women jailed for Islamic State membership to serve their sentences at home, Kremlin human rights ombudswoman Tatyana Moskalkova said. “There are mechanisms for children,” she said.

Gabibulayeva was on the last flight for mothers. Her first husband was killed in Russia’s southern Dagestan region, her second was a former prisoner of the U.S. Guantanamo camp who’s now serving a life sentence in northern Russia. Her last two husbands were Islamic State members in Syria — one was killed and her most recent spouse is apparently in prison in Europe, she said.

She was jailed for two years in 2012 after police found a bomb in the trunk of a car she was driving. After her release, Gabibulayeva left Russia for Turkey and then went to Islamic State territory in Syria. On her return, she received a six-year suspended sentence for membership of an illegal armed group.

Relatives have identified at least 1,779 Russian women and children in Syria and Iraq who want to return from former Islamic State territory, according to a letter Saratova sent to the Foreign Ministry in Moscow.

“The situation there is getting worse every day,” she said. “Something needs to be done quickly.”