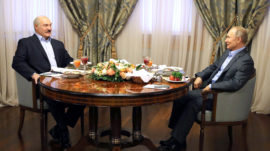 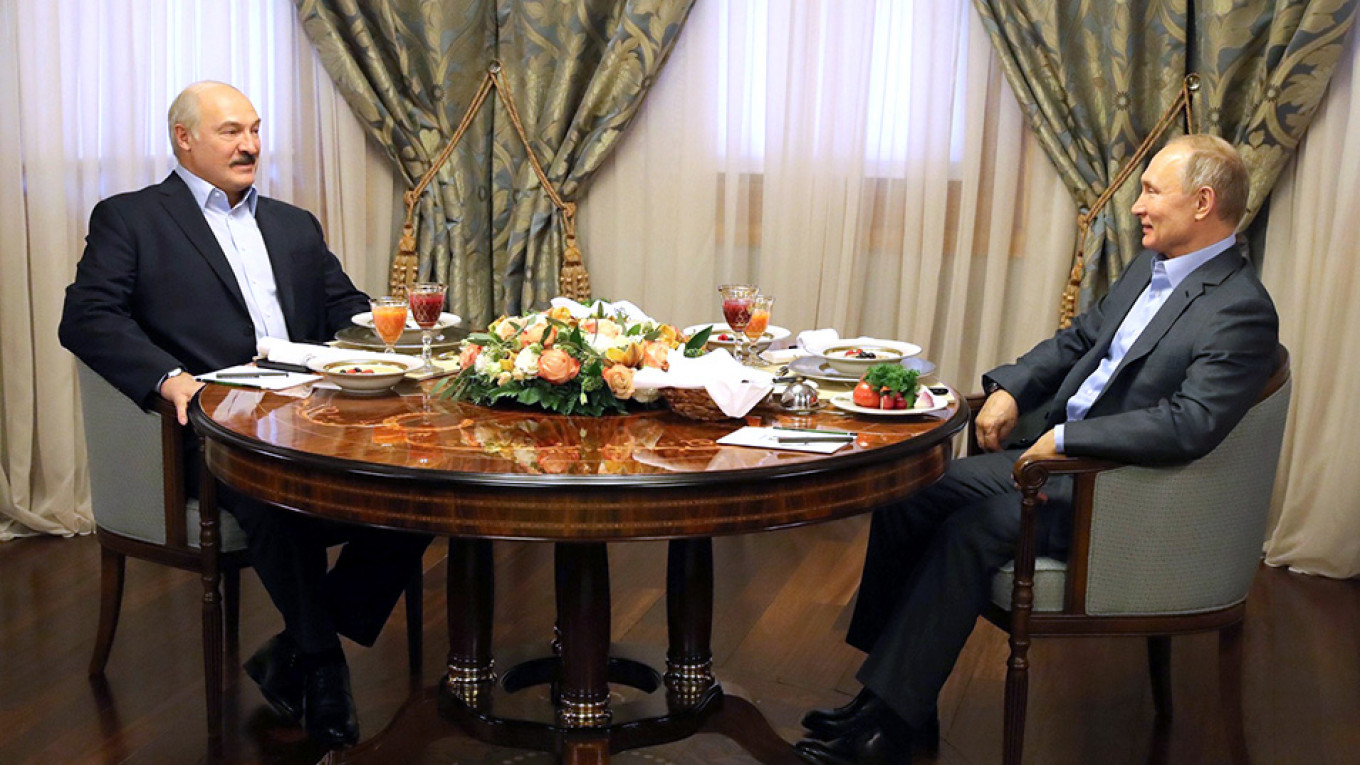 Vladimir Putin’s surprise firing of Russia’s government and unveiling of constitutional changes that would weaken the presidency may only be Plan B for retaining power after his final term ends in 2024.

In the month before Putin’s Jan. 15 announcement, he’d pushed hard to convince his longer-serving counterpart in Belarus, Alexander Lukashenko, to revive a moribund agreement to create a superstate between the neighboring former Soviet republics, two Kremlin officials said.

So far, Plan A has failed, even after another face-to-face between the leaders in Sochi last Friday. And Lukashenko, a former collective farm boss who’s run his country of 10 million like a personal fiefdom for a quarter century, is paying the price for rejecting Putin.

On Jan. 1, Putin started squeezing the lifeblood of Belarus’s economy — cheap crude oil, which Belarus refines and exports for badly needed hard currency. Russian oil supplies to Belarus plunged by three-fourths in January and officials in Moscow say flows may stop altogether if Lukashenko doesn’t agree with its producers on market prices.

Absorbing Belarus would allow Putin to sidestep term limits by becoming the leader of a new “Union State.” Lukashenko, though once a supporter of the merger, is adamantly opposed, people close to the Kremlin said. The idea was first agreed in principle in 1999 between Lukashenko and Russia’s then-ailing president, Boris Yeltsin.

“Putin sees himself as a world leader and it’s very hard for him to disassociate himself from the role of president,” said Gleb Pavlovsky, a Kremlin adviser from 2000 to 2011. While the constitutional amendments Putin is advocating would give him some oversight over his successor as head of a strengthened State Council, the “ideal option is Belarus,” he said.

The standoff is becoming an issue of international concern, especially in light of Russia’s annexation of Crimea from Ukraine in the wake of the overthrow of a Putin ally in Kiev in 2014. The Defense Ministry in Lithuania, which borders both Russia and Belarus, warned in its 2020 threat assessment that Lukashenko has few cards left to play to resist Putin’s pursuit of “deeper political integration.”

The Lithuanian report followed the first visit to Minsk by a U.S. secretary of state, Mike Pompeo, since 1994. Pompeo told Lukashenko on Feb. 1 that American companies stood ready to meet Belarus’s oil needs at competitive prices.

What Changes Is Putin Planning for Russia’s Constitution?

Lukashenko, 65, has proven deft at playing East and West off one another to maintain his country’s independence. Addressing voters ahead of presidential elections in August, he said Pompeo’s visit created a “scandal” in Russia, so imagine the reaction if he decided to become friends with U.S. President Donald Trump.

“If Trump comes tomorrow, what will they do then?” Lukashenko said in remarks posted on his website. “We are establishing relations with the greatest empire, the leading country in the world.”

Lukashenko said in an interview with Russia’s leading talk radio station on Dec. 24 that Putin once offered him a parliamentary job in Moscow if he allowed their two countries to unite.

Asked by Ekho Moskvy about getting dragged into Putin’s plans for staying in power after 2024, the Belarusian leader said, “I’m not involved in this and I will never be. And I told this to your president. I don’t need anyone to give me some parliament post in Russia — even if they convict me and bring me there in handcuffs! Never!”

So far, Lukashenko still has a firm grip on power at home, where the state controls most major media outlets.

Public support in Belarus for the Union State has fallen to about 40 percent from 60 percent in the last year, inversely tracking the rise in tensions over energy supplies, according to Andrei Vardomatski, an independent pollster in Minsk.

The timing of Putin’s renewed pressure is instructive, given Lukashenko’s re-election bid and the importance of discounted oil to the domestic economy, said Dzmitry Kruk, senior fellow at the BEROC research group in Belarus’s capital.

“Paying full world prices for oil — an increase of about 20% over the level Russia charged last year — would be a severe shock,” Kruk said. “The economy would feel a serious impact within months, which is hardly acceptable from a political perspective.”

One reason Belarus has gotten such sweetheart deals from Russia in the past is its role as the biggest conduit of combined oil and gas flows to Europe.

Russia’s Druzhba, or Friendship, pipeline to consumers in Western Europe handles about 20% of all crude exports outside the former Soviet Union. And state-run Gazprom moves about 20% of all Russian gas shipments to Europe through Belarusian pipes.

Lukashenko has responded to his country’s dependence on cut-rate oil from its former communist master by ordering the government to find enough new suppliers in the Middle East and elsewhere to slash Russia’s market share to at least 40%. Last month, Belarus ordered its first-ever shipment of crude from Norway, delivered via Lithuania.

For Putin, Belarus is a key link in a nascent Customs Union the Russian leader hopes one day will stretch from the Asian Pacific to the European Atlantic. Belarus has also been increasingly cooperative when it comes to Russian military movements and bilateral intelligence sharing, according to the Lithuanian threat assessment.

Lukashenko, in comments to various media outlets in recent months, has hinted at having three main ways to counter Russian political and economic aggression if needed — slowing energy flows westward, hamstringing post-Soviet integration efforts and complicating lease renewals for Russian military facilities, some of which are due to expire this year.

“The big question, though, is how consistently Lukashenko will be able to stick to these positions in the event Russia exerts sustained economic and political pressure,” said Andrei Yeliseyeu, a research director at the Warsaw-based EAST Center.