On the 3rd of October 2018 in Moscow at the 2nd International Forum “Russian Energy Week” ROSATOM held the round-table session “Nuclear Power – the Basis for Global Partnership and Current Development”. 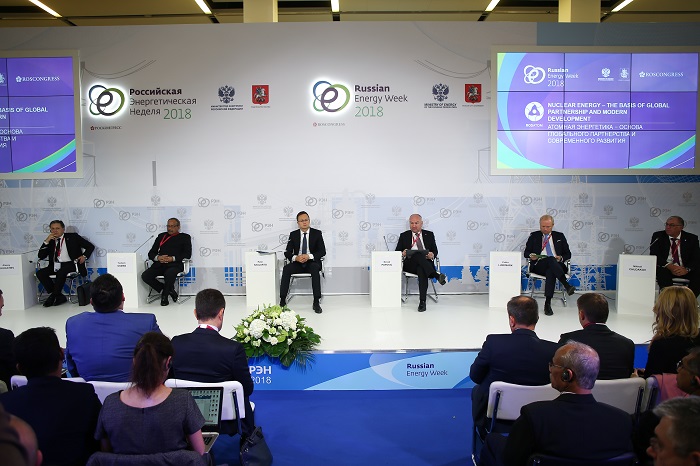 The discussion participants talked over the carbon-free generation opportunities which are brought in by the development of nuclear technologies. Minister of Science and Technology of the People’s Republic of Bangladesh Yeafesh Osman emphasized: Bangladesh already suffers from climate change; therefore, we need so much a reliable energy source which would not affect the environment. Rooppur NPP, which we build jointly with ROSATOM, is called for to become the one, he said.

It was noted that nuclear technologies have a major impact on the entire economy of the countries which develop them. “ROSATOM contributes to the development of the world nuclear power. We have contracts for 25 power units which are actively implemented and 11 more units have been contracted. Availability of nuclear technologies to a country is a great impetus to socioeconomic development,” Director General of ROSATOM Aleksei Likhachev said.

With that, the discussion participants paid attention to the fact that in the international nuclear society there is a long-felt need to move to a new level of cooperation in implementing NPP construction projects. The development of such cooperation would facilitate energy security, stability of supplies and environment-friendly generation.

An important stage of nuclear power development of the preceding century was the step-by-step turn to clean energy sources. This opens up broad opportunities for the development of nuclear power. Today, atom gives a little more than 1/10 of the world energy production, about 400 GW. However, to reach goals set by the Paris Climate Summit and solve global environmental problems it is necessary to change more substantially the world energy mix towards CO2-free energy generators. The program “Harmony”, proposed by the World Nuclear Association, is called for to solve these tasks.

The International Forum “Russian Energy Week” is one of global platforms dedicated to discussions of prospects of the international energy market development. The forum organizers are the Ministry of Energy of Russia and the Government of Moscow. The forum is to discuss global challenges the energy sector is facing and topical problems of its development. President of Russia Vladimir Putin, Minister of Energy of Russia Aleksandr Novak, Mayor of Moscow Sergey Sobyanin, President of Siemens AG in Russia Dietrich Moller, and ministers of related agencies from 30 countries are expected to attend the event which will work until October 6.

The Akademik Lomonosov completed charging its nuclear reactors with fuelRosenergoatom: the power unit No 4 of Rostov NPP was put into commercial operation 3 months earlier the scheduled date