December 9, 2019, Cairo (Egypt) – ROSATOM took part in the Fifth Arab Forum on the Nuclear Energy Prospects for Electricity Generation and Seawater Desalination held in Cairo from December 2 to 4.

The conference organized by Arab Atomic Energy Agency (AAEA) and Nuclear Power Plants Authority. It brought together stakeholders of nuclear industry of the region, international energy companies as well as scientific and educational organizations. ROSATOM was one of the event’s partner. 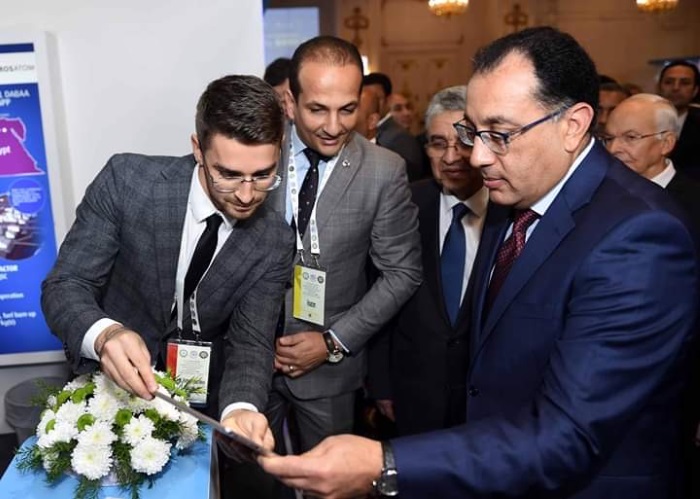 Conference program included several presentations given by representatives of ROSATOM enterprises, such as ASE Group, Rusatom Service, Rusatom International Network expressed different areas of ROSATOM expertise in terms of nuclear power development. Thus, Dr. Grigory Sosnin, Vice President of ASE Group – Director of El-Dabaa NPP Project, speaking at the session, dedicated to future of nuclear energy in the Arab world, stressed out the importance of nuclear energy as part of sustainable development of MENA countries. “Today countries in the region like Egypt, UAE, Saudi Arabia, Turkey – all rich in hydrocarbons and blessed with warm climate perfect for solar PV – all investing in nuclear power. The decision is logical when you see the benefits of nuclear energy. Its potential is huge, indeed. Certainly, “nuclear” choice brings a clean, reliable, uninterrupted source of energy at a predictable price for decades to come. And as a major infrastructural project it is equally stimulates the development of national economies and plays an important role in improving the quality of life”.

Dr. Sosnin also highlighted challenges that should be taken into account while implementing NPP projects. “Since nuclear power is chosen, this choice entails technological challenges that require serious preparatory work. Speaking about ROSATOM experience in construction of NPPs we strongly believe that successful implementation of nuclear power program is inevitably bounded by success in such areas as nuclear personnel and public acceptance issues. Background of many nuclear newcomers shows that delays in personnel training can lead to a deviation in commissioning schedule of a project. At the same time its public support becomes a driver for the project while its absence can be a serious trigger. That’s why we put these concerns on a table of discussion with partners and recommend to work on these issues from a scratch of a project”.

In her turn, Yulia Chernyakhovskaya, deputy director general at Rusatom Service, speaking at the session dedicated to regulatory and legislative frameworks for nuclear activities, safety, security and nuclear safeguards, shared an opinion on the importance of nuclear infrastructure for sustainable development of the country. “It is imperative to support the involvement of various stakeholders in NPP project. In this way, for example, Rusatom Service acts as a secretary in interministerial agreement between ROSATOM and Russian Regulatory body Rostekhnadzor as part of assistance in creation and improvement of national nuclear energy infrastructures of countries constructing or planning the construction of nuclear facilities for Russian designs. Thanks to the high-level support and involvement of various ministries and departments in the development of national nuclear infrastructures of partner countries, Russia, as a responsible vendor, transfers its best practices for the safe and efficient operation of nuclear power plants in full compliance with international requirements and standards”, she noted.

Finally, the discussion about public awareness of nuclear energy has been held on sidelines of the Forum with ROSATOM representative attended together with speakers from Nuclear Power Plants Authority, Nuclear and Radiological Regulatory Authority, Ministry of Electricity and Renewable Energy and Environmental Affairs and Climate Change Expert. ROSATOM shared the experience and approach that it implements while construction of NPP projects in Russia and abroad paying attention on importance of such principles to follow as direct and constant dialogue with civil society, dissemination of basic knowledge about nuclear energy and radiation, interaction with media and educational institutions.

ROSATOM also took part in the exhibition of the Forum. The audience had a chance to learn more about the El Dabaa NPP project and got a chance to visualize NPP based on VVER-1200 reactors through interactive augmented reality application being presented at the booth.

ROSATOM is a global technological leader with the necessary resources and competencies for successful operations in all parts of the nuclear energy production chain from uranium mining to decommissioning and safe nuclear waste disposal. ROSATOM is the largest energy producer in Russia, supplying almost 19% of the country’s energy needs. With 36 units in 12 countries at different stages of implementation, the company ranks first in the world in foreign project development. It also ranks first in the world for uranium enrichment, second for uranium reserves, and fourth for production, accounting for 17% of the global nuclear fuel market. ROSATOM unites more than 400 enterprises and organizations, including the world’s only nuclear icebreaker fleet. The company’s workforce is made up of a total of 250 thousand people.