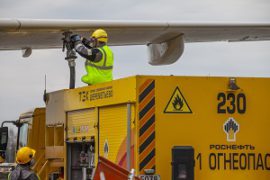 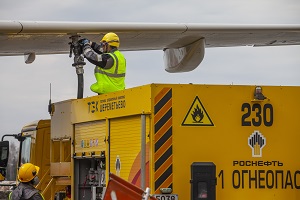 In 1Q2019 Rosneft Aero, a subsidiary of PJSC NK Rosneft, increased its overwing fueling at Russian airports by 9.5% q-o-q to 458,000 tons. Overwing fueling operations grew by 13% and amounted to 50,700 in the reporting period.

Rosneft Aero sold over 797 tons of aviation kerosene in the first three months of 2019, having increased this indicator by 5.2% compared to the results in 1Q2018.

The aviation fuel sales growth is a part of Rosneft’s strategy aimed at the development of aviation fuel supply. Rosneft Aero provided the largest share in the growth by its operations in such key Russia’s airports as Sheremetyevo in Moscow, Pulkovo in Saint Petersburg and Pashkovsky in Krasnodar.

In 2018 Rosneft Aero fuelled more than 200,000 aircrafts, and the company’s market share amounted to 32.6% in aviation fuel production.

Rosneft Aero, the operator of the aviation refueling business of PJSC NK Rosneft and one of the leaders in the Russian aviation fuel market.

Since 2008, the company has been selling aviation fuel, as well as providing a full range of services for the supply of aviation kerosene and the organization of aircraft refueling at airports in Russia and the CIS.