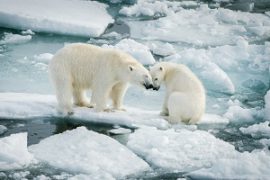 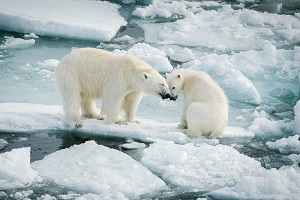 On February 27th International Polar Bear Day is celebrated. The aim of the event is to draw extra attention to conservation of the largest predator in the planet.

Rosneft considers the preservation and protection of polar bears as one of its priorities in activity in the field of ecology and environmental protection. Since 2014 Arctic Research Centre (included in Rosneft Corporative scientific complex) together with The Marine Mammals Council has been conducting a study of polar bears using up-to-date technologies. They are provided with the assistance of aviation, research ships, icebreakers and surface transport. The field studies include registration of polar bears and traces of their presence; collection of biological samples from the individuals met and from the remains of their prey items – other mammals (pinnipeds or whales); a complex of zoological researches with temporary immobilization of an animal including collection of survey data, collection of samples for the following laboratory treatment, inking the ID number in and the satellite tag fastening.

According to results of annual arctic expedition a pool of data unprecedented in its size was collected which not only actualizes the earlier studies but also enlarges the contemporary view of polar bear spreading, key places of living and population links fundamentally. For instance, during Rosneft expeditions the duration of polar bears field studies amounted more than 6 months, the duration of aerial observation – above 200 hours. Above 500 contacts were registered, as with the individuals as with the groups of several animals. There are above 70 autonomous photorecorders are set in key places of living, more than 30 animals are examined in detail, about 500 biological samples are collected and analysed in the laboratory.

Since 2013 polar bears of all Russian zoos have been under the treatment of Company. By now Rosneft provides management (nutritional wellbeing, veterinary attendance and the environment fulfilment) of 32 polar bears: 15 grown-up females, 13 grown-up males and 4 cubs under the age of 2. In 2018 an orphan polar bear cub was saved in wildlife (Dikson urban locality, Krasnoyarsk Krai) and moved into the Krasnoyarsk zoo. It was a young female then called Ursula.

According to the specialists’ research now there is from 22,000 to 31,000 polar bears across the globe. A polar bear inhabits all Arctic Basin including its shores and islands. There are no geographical boundaries for the species. The main factors determining its spreading are the marine ice, existence of places suitable for birth lair making and the food accessibility.

Polar bear usually adheres to drift ice, swims well and migrates seasonally. Under optimal ice conditions some individuals can reach the North Pole. However, their main places of inhabitancy are the zone of continental shelf at the periphery of the Arctic Ocean. Polar bear is a skilful hunter. His sight, smelling and hearing are well-developed. His main preys are two numerous species of Arctic seals: a ringed seal and a bearded seal (or marine hare).

1. The largest bear. Being the largest surface predator, the polar bear can weight about 700 kg and reach 3 meters lengthwise.

2. Thermal isolation. Polar bear’s fur is not white but transparent; a hair is hollow and filled with air what helps the animals to save heat better.

3. New-born cubs are about the size of a guinea pig. They come out the lair 4-5 months later. The cubs will stay with their mother for about two years, during which they will learn the skills required for survival in the Arctic.

4. The offspring of the polar and brown bear. Most recently, in 2006, genetic testing confirmed the existence of hybrids of polar bears and grizzlies (a subspecies of a brown bear living in western Canada and Alaska), also known as a grolar (grizzly + polar), or a polar grizzly (Ursus arctos × maritimus). The hybrid looks like an intermediate between the two species, but since wild hybrids are usually born from polar-bear mothers, they grow and behave like polar bears. Their ability to cross is not surprising, considering that polar bears evolved from brown bears only 150,000 years ago!