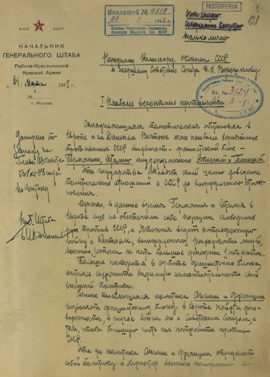 Russia’s Defense Ministry has declassified a trove of documents relating to a Soviet-Nazi nonaggression pact signed 80 years ago which historians say paved the way for the start of World War II.

Nazi Germany and the Soviet Union signed the Molotov-Ribbentrop Pact pact on Aug. 23, 1939. A secret protocol that accompanied the non-aggression treaty divided the territories of Poland, Romania, the Baltic nations and Finland into German and Soviet “spheres of influence,” leaving the way open for the German invasion of Poland.

The Defense Ministry said it released the documents “not in chronological order, but in a sequence that will allow viewers to get the most complete picture” of what led to the pact.

It highlighted a 31-page dispatch by a Red Army chief of general staff, Boris Shaposhnikov, as a key document that “completely flips traditional notions of” why Molotov-Ribbentrop was signed.

“The Soviet Union needs to be ready to fight on two fronts: In the West against Germany and Poland and partially against Italy with the possible accession of the border states, and in the East against Japan,” the 1938 dispatch reportedly reads.

Putin Needs to Bury This Relic of Stalin

Shaposhnikov warned that Germany and Poland could deploy dozens of infantry divisions and field thousands of tanks and warplanes in an eastern European region on the Belarussian-Ukrainian border.

Historians have been divided over the impact of Shaposhnikov’s 1938 letters. The Russian Academy of Sciences’ Alexander Dyukov hailed it as a key contribution to the study of military history, while German Historical Institute in Moscow researcher Sergei Kudryashov dismissed it as uninformative.

“It’s only interesting from the viewpoint of how [Soviet] leadership understood conditions on the eve of the war,” Kudryashov told the RBC news website.

The Defense Ministry has said its publication of declassified documents is “aimed at protecting historical truth and countering the falsification of history and attempts to revise the results of the Great Patriotic War.”