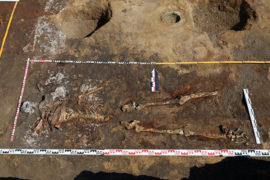 Archeologists have for the first time discovered three generations of ancient Amazon women warriors buried in a single tomb around 2,500 years ago in present-day Russia.

Experts say the women warriors, who belonged to a nomadic people that dominated Eurasia called the Scythians, may have inspired the Amazons depicted in Greek mythology. A Russian Academy of Sciences expedition has in the past decade uncovered the graves of 11 young Scythian Amazons in southwestern Russia, lead archeologist Valery Gulyayev said.

“We [are coming] across burials with four Amazons of such different ages for the first time,” Gulyayev said in a press release last month announcing the early results of the decade-long expedition in the Voronezh region.

The youngest of the buried Amazons was aged 12-13, the Academy of Sciences’ institute of archeology said. Two of the three older women were about 20-25 and 30-35 when they died.

The 30-35 year old Scythian warrior was buried alongside a bronze mirror, two spears and a glass bead bracelet. She was buried in a pose called the “horseman,” with her legs positioned to look like she’s on horseback.

The oldest woman warrior was around 40-50 years old, an age that Gulyayev says is past the average life expectancy for ancient Scythians. She was buried with an ornate golden headdress that Gulyayev said was uniquely well-preserved.

“We have come across an enigma: we have two women in their prime of life, one is a teenager and the other is a woman quite old for the Scythian epoch,” Gulyayev said.

Other items that were found buried with the warrior women include more than 30 iron arrowheads, iron knives, pieces of horse harnesses and horse bridle hooks.

Several vessels found alongside some of the remains helped the archaeologists date their burial period to the fourth century B.C.

“It is not clear how they could die at the same moment… There are some marks of the tuberculosis and brucellosis, but these illnesses cannot cause death simultaneously,” Gulyayev said.

“That is why we still cannot understand what the cause of death was and why four women of different ages were buried at the same time,” he said.