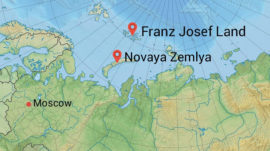 The Russian military said it has discovered a new island in the Arctic where maps had previously shown a peninsula as climate change accelerates the disappearance of sea ice.

The Defense Ministry last month confirmed the discovery of five new Arctic islands off the coast of the Novaya Zemlya archipelago. Russia has been increasing its military and commercial presence in the Arctic as the northern region becomes more accessible, brushing off environmental concerns.

On Thursday, the Defense Ministry announced that the Navy’s Northern Fleet expedition had “convincingly proved” the presence of an island previously thought to be a peninsula on the Franz Josef Land archipelago.

The expedition has placed the 200-square-kilometer Littrow Island and a newly formed strait on their nautical charts, the Defense Ministry said. Russian astronomers had suspected their presence as early as 2006.

This week, Siberian scientists announced the discovery of plant life in the tundra due to melting permafrost.

“It’s possible that animals for whom this habitat is unnatural will appear in the Arctic zone in the coming years,” the Tomsk State University said Wednesday.

“The map of sea ice cover anomalies for the Arctic region shows sea ice conditions much lower than average in the Beaufort, Chukchi, and East Siberian Seas,” the observation program said.

Israel Must Be Allowed to Act Against Iran, Netanyahu Says in RussiaPrague Will Remove Statue of Soviet Marshal Who Led Red Army Forces