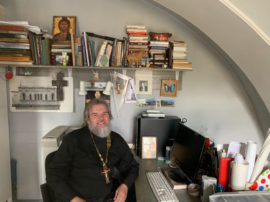 “I really feel for the boys. A great evil is being done to them,” he told The Moscow Times in an interview in his office on the second floor of Moscow’s 16th-century Church of the Dormition of Theotokos, located steps from the Kremlin.

Batov is one of 78 Russian Orthodox priests who signed an open letter early Wednesday calling on the authorities to stop criminal prosecutions of protesters and bystanders following this summer’s mass election protests in Moscow.

Seven men, some as young as 21, are facing various charges after being arrested during the largest sustained protest movement in Russia since 2011-2012. Seven more have been sentenced to prison terms of up to five years, with the controversial conviction of an up-and-coming actor leading to a widespread public backlash this week.

Batov’s name is listed first on the letter, published on the Orthodoxy and the World website, although he insists the message was the collective effort of 30 or so Russian Orthodox priests in Russia and abroad.

“We all came together online and passed the letter on through social media, with each priest adding a line or two,” he said.

The priests’ letter slams the “repressive trials” and  “intimidation” faced by Russian citizens, and mentions that two of the men on trial are “devoted Christians.”

Shortly after it was published, other professionals including doctors, teachers and book critics also came out with open letters demanding that defendants in the so-called “Moscow case” be acquitted or let free.

Batov said the religious domination of the accused didn’t play a role in his decision to support the protesters, and that he believes the charges against them are “completely out of proportion.”

“As a Christian, I had to show my compassion for others’ pain and suffering, much of which I actually saw with my own eyes,” he said.

Batov’s church is on one of the routes used by protesters this summer during the often violently suppressed marches. After the July 27 protests, footage circulated online showing people hiding in a neighboring church to avoid arrest.

“The Cosmas church got all the media attention, but we too helped,” he explained, adding that he felt it was the church’s “historical duty” to provide “sanctuary for the persecuted,” he said.

“When in church, people cease to be protesters or the police. They are just people seeking shelter.”

The open letter, signed by priests based in Russia, Europe and Hong Kong, is unusual because of the number of signatures it attracted and for its direct criticism of the Kremlin, said political analyst Tayana Stanovaya.

“Church authorities have been some of the loudest critics of the protest movement,” she said.

“That is why this letter is so interesting. It shows that within the conservative structures, many are unhappy with the way the protests have been handled. Conservative elites will also read this.”

After decades of repression and persecution under the officially atheist Soviet regime, the resurgent Orthodox Church has developed a close relationship with the Kremlin. Head of the Russian Orthodox Church Patriarch Kirill is considered a close ally of Vladimir Putin, and has in the past described the president of Russia as a “miracle from God.”

Russian Orthodox Church spokesman Vakhtang Kipshidze on Wednesday was quick to dismiss the letter, calling it “a political declaration” that is not part of the church’s mission.

“It is not political. We are showing our Christian position against government threats.”

The priest’s eyes lit up when he described the “positive reaction” he said the letter received online, and from some of his colleagues within the church.

“I know first-hand that many other church workers around the country want to sign up to the letter. I believe many more will speak out.” The number of signatures had risen to 125 by Thursday.

As he headed from his office toward the main body of the church to prepare for his final mass of the day, Batov quoted from the teachings of St. Augustine, an early Christian theologian whose work was focused on the need for a “just government.”

“A state devoid of justice is no better than a band of robbers,” he said.

Who Is Speaking Out Against the Moscow Protest Prosecutions?Russian Volcano’s Eruption Turns Skies Purple Across the Globe – Study