Russian Women to Watch in 2021 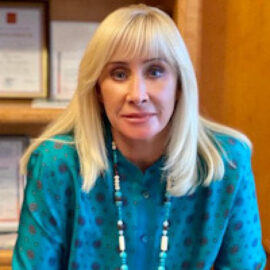 The Moscow Times has compiled a list of the most impressive Russian women in 2020. It includes movers and shakers across different parts of Russia, generations, and occupations. However, all of these women have one thing in common — they were able to use their platforms to tackle the new and old challenges of 2020 and will most likely continue to do so in 2021.

Lawmaker Oksana Puskina has branded herself as a liberal State Duma deputy for the Kremlin’s ruling party.

Pushkina, who vice-chairs the committee on family, women, and children’s issues, has become an advocate for women suffering under domestic violence. In October, she co-authored a bill that would re-criminalize first-time domestic abusers and include provisions for women to obtain restraining orders.

However, legislative attempts to combat domestic violence have been met with resistance from conservative Orthodox Church groups.

The pandemic greatly exacerbated an already serious domestic violence problem in Russia, as victims found themselves trapped at home with their abusers. However, in April 2020, the Federation Council’s chair Valentina Matvienko announced that senators will return to work on initiatives to counter domestic violence after the coronavirus pandemic is defeated.

Pushkina is now member of the working group on the domestic violence prevention bill, which will include the institution of a protective order helping to isolate victims of violence from their abusers.

Pushkina believes that positive change is possible from within the existing political system and remains a strong supporter of the ruling party and Putin himself.

Marina Udgodskaya, 35, has swept to power like a modern Cinderella.

Udgodskaya worked as a cleaner in the administrative offices of Povalikhino village in rural Russia when her boss, Nikolai Loktev, asked her to run against him in the upcoming election for the head of a settlement in the Kostroma region. The former policeman, running with the support of the ruling United Russia party, needed a competitor, but everyone he asked had refused to participate.

The plan backfired when Udgodskaya beat Loktev by a landslide and claimed about 62% of the vote in a settlement of over 200 people. Udgodskaya, who had never had any political ambitions, became a sensation overnight amid record-low ratings for the ruling, pro-Kremlin United Russia party.

Udgodskaya was signed into her new role as the head of her village on Oct. 1, 2020.

Sardana Avksenteva is the popular mayor after the city of Yakutsk, the second-coldest city in the world after the other Russian city of Norilsk.

Avksenteva ousted a United Russia candidate in the 2018 mayoral elections.

In just two years, Avksenteva has brought increased transparency to local government and made a series of bold changes that caught attention throughout Russia.

She made headlines this year by proposing to move the local mayoral office from the center of the city to its outskirts, citing expensive rent and aiming to save her constituents’ tax rubles.

In the spring, when protests broke out in Yakutsk over a crime committed by a migrant from Kyrgyzstan, the mayor met with the protesters and managed to calm the situation. Avksentieva asked women not to let their husbands, sons and brothers make mistakes. People applauded Avksentieva as she restored peace.

Avksenteva is also the second most popular mayor in Russia on Instagram. She has over 200,000 followers, behind only Moscow’s mayor Sergei Sobyanin.

However, the future of Avksenteva’s political career remains uncertain as local reports say she could leave her post due to health problems.

Tatiana Moskalkova, Ombudsman for Human Rights in Russia, received more than 9,000 questions and complaints during the pandemic year of 2020 and was able to answer about 5,000 of them.

The appeals related to the protection of labor rights, issues of families separated by closed borders, difficulties returning home due to restrictions on air traffic, freedom of movement in Russia during the period of restrictive measures and others.

Moskalkova also called for an investigation into the poisoning of Kremlin critic Alexei Navalny and supported including amendments to the law on foreign agents that would exclude activities in the field of medicine, sports, and social support of citizens.

The poisoning of Russian opposition leader Alexei Navalny in August made global headlines. However, it was his wife Yulia who advocated on her unconscious husband’s behalf and appealed to President Vladimir Putin for his transfer to Germany for treatment which probably saved his life.

Navalny himself says his wife played a crucial role in saving his life. He described in detail in an Instagram post his rehabilitation process after waking from a coma.

“I have already been taken out of the coma, but I don’t recognize anyone, I don’t understand what’s going on. I can’t speak and I don’t know what to say. And all my time is spent waiting for her to come. It is unclear who she is. I don’t know what she looks like either … She talks cheerfully and laughs. She tells me something. When she is around, idiotic hallucinations recede. It’s very good with her. Then she leaves, I feel sad, and I start waiting for her again,” he wrote.

Alyona Popova is one of the most prominent women’s rights advocates in Russia, and she is pushing for the adoption of a law against domestic violence.

Popova co-authored the bill to re-criminalize domestic violence in Russia alongside State Duma deputy Oksana Pushkina. However, the adoption of the law stalled in the conservative political establishment with Orthodox Church groups accusing it of violating “traditional family values.”

Popova is also pushing for separate legislation that would grant fathers 90 days of paternity leave to allow parents to share the responsibilities of child care.

Popova has also spoken out against the Justice Ministry labeling the women’s rights organization Nasiliyu.net (No to Violence) as a “foreign agent,” and criticized the Russian government for placing traditional family values over women’s safety.

“And if an organization begins to help victims of domestic violence bypassing the state, as the Nasiliyu.net center does, then it is not allowed to work and is recognized as a foreign agent,” Popova said in a Facebook post.

Zinaida Korneva, a 98-year old World War II veteran, launched a successful fundraising campaign for the families of medical staff on the frontlines of the coronavirus pandemic.

In April, Korneva recorded a YouTube video sending warm regards to Moore and launching a campaign of her own. She promised to record herself telling stories of her experience of World War II in exchange for donations that would go to support Russian medics and their families. The campaign concluded on May 9 — Victory Day in Russia — with about 4.5 million rubles, or $59,300, raised and distributed among 151 families.

President Vladimir Putin awarded Korneva with a medal for her “great contribution to charitable and public activities.”

Marina Pisklakova-Parker is a founder and director of ANNA center, an NGO unifying 150 organizations working to combat violence against women in Russia and the former Soviet Union.

Many Russian women found themselves locked in with their abusive husbands during the spring pandemic lockdown. Pisklakova-Parker’s ANNA center provided phone support for these women.

Pisklakova-Parker also addressed the problem of increased labor for women duting the pandemic, pointing out that the education of children from home and caring for sick older relatives disproportionately fell on female shoulders in 2020.

Each episode gets over a million views for its candid takes on common problems.

Mingalimova used to be an editor at the successful YouTube project “Vdud” before going solo and launching her own YouTube channel called “Nezhny Redaktor,” or “Gentle Editor.” The channel focused on interviewing Russian female celebrities and became a launching platform for “Podrugi.”

Natasha Maximova is the first transgender model to appear on the cover of the Russian version of Tatler magazine. She’s a glamorous socialite who splits her time between Moscow and Paris, but she grew up in Kazakhstan during Soviet times, the child of a kindergarten teacher and a welder.

Maksimova is known for posting provocative nude pictures on her Instagram page. However, in 2020 it was her coming-out post that attracted the most attention.

For the first time, Maksimova opened up about the realities of growing up as a transgender woman in the Soviet Union, first on her Instagram page and then again in an interview with Tatler and on Ksenia Sobchak’s YouTube show.

In an increasingly conservative Russian society, the conversation around what it means to be transgender has been muted.

Yulia Tsvetkova, an artist and LGBT activist from the Russian Far East, shared drawings of vulvas on a “Vagina Monologues” social media page and is now facing criminal charges for distributing pornography in Russia.

In 2020, three administrative cases were brought against Tsvetkova accusing her of spreading LGBTQ+ propaganda to minors, and one criminal case for distributing pornography.

Tsvetkova was placed under house arrest for sharing her body-positive drawings on social media while she awaited trial for distributing pornography online, a charge that carries a sentence of up to six years.

Tsvetkova was also prosecuted for spreading “gay propaganda” to minors for directing a show called “Blue and Pink,” which criticized gender stereotypes and sharing drawings of same-sex couples with children on social media. Russia’s legislation on spreading gay propaganda to minors carries a maximum sentence of 15 days in prison.

Tsvetkova’s case causing a public outcry. A number of prominent cultural figures spoke out in her support, and protests in solidarity with the young artist took place in several Russian cities, including one in Moscow on International Women’s Day.

In 2020, one of Russia’s main state TV channels aired an eight-part adaptation of Guzel Yakhina’s debut novel “Zuleikha Opens Her Eyes” about the life of an uneducated peasant Tatar woman sent to Siberia during 1930s dekulakization.

Yakhina, a Russian writer with Tatar roots, was inspired by her grandmother’s tales of her time in Siberia. Her novel explores a difficult period in Soviet history that most state channels prefer to gloss over, which made its adaptation unusual.

Even though Yakhina’s novel won some prestigious literary awards when it first came out in 2015, its reception among critics has been mixed. Prominent Tatar playwright Rabit Batulla criticized Yakhina’s portrayal of Tatar life and traditions, which in his view was unrealistic and far-fetched.