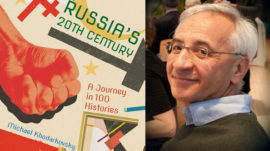 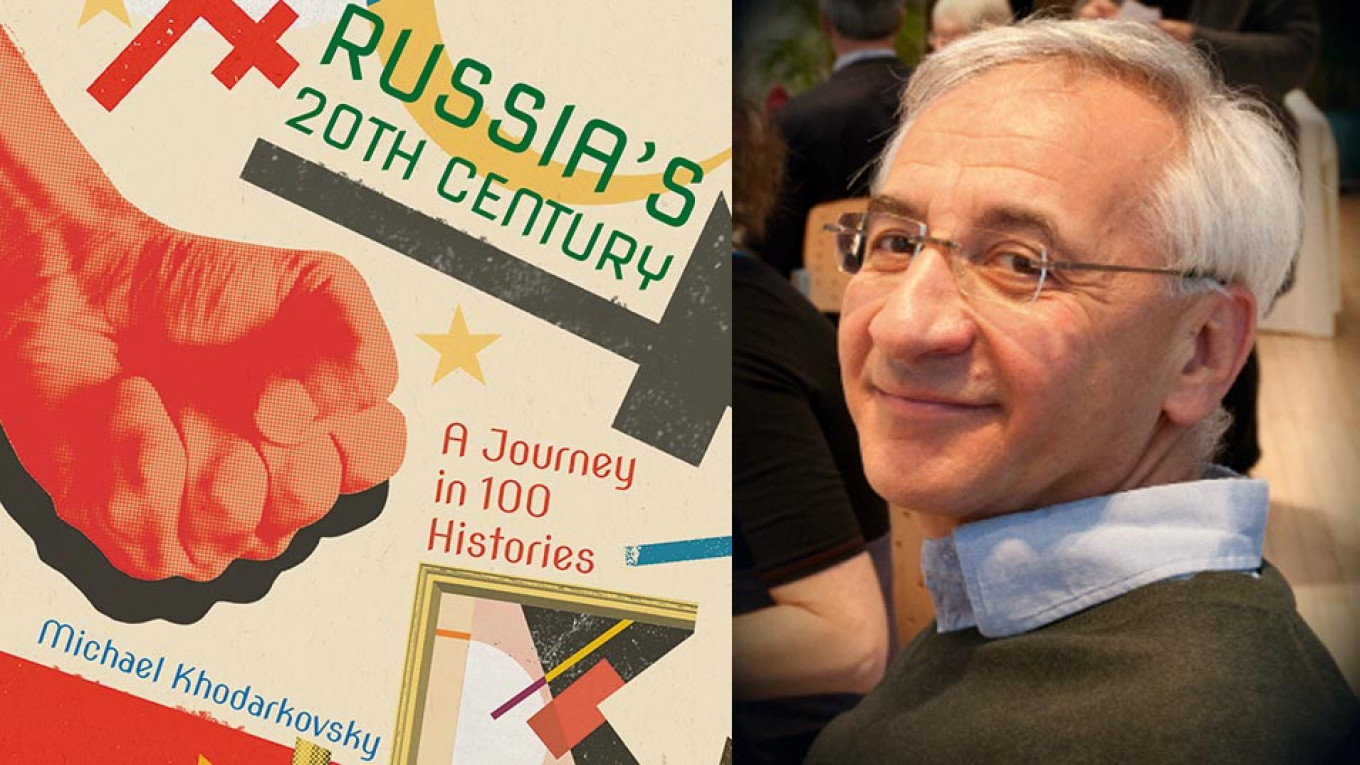 Professor Michael Khodarkovsky’s “Russia’s 20th Century: A Journey in 100 Histories” seems to prove Rudyard Kipling’s theory that” if history were taught in the form of stories, it would never be forgotten.”

“Russia’s 20th Century: A Journey in 100 Histories” distills one of the more complex, thorny, dystopian and tragic eras of history into a slim, highly readable volume that packs an incredible punch. Inspired by Günter Grass’s “My Century,” which explored the twentieth century in 100 vignettes, Khodarkovsky applies the model to an examination of Soviet history from 1901 – 2000: Each story presents a specific incident or moment drawn from politics, military history, the arts, international relations, or science. These are deftly drawn vignettes, offering vivid portraits of people, evocative depictions of places, and immediate descriptions of events.

In 1900, we meet Tolstoy and Gorky in the book’s first episode: “…the aging and tired [Tolstoy] was in a melancholy mood. Treated like a god by fellow writers and like a tsar by peasants, Tolstoy played the role of the wise, old, and unpredictable man.” Gorky, on the other hand, “was a rising literary star…inspired by the enormity and profoundness of Tolstoy’s personality.” This the ideal beginning to the tumult to come: two literary titans perfectly positioned as the double-headed God, Janus, representing the transition between two years, two centuries, and two eras.

An episode from 1905 gives us a ringside seat to “the dress rehearsal for the Russian Revolution,” following the “massacre of hundreds of unarmed demonstrators, shot in cold blood by government troops near the tsar’s residence at the Winter Palace in January 1905. The news of ‘Bloody Sunday,’ as the event became known, spread quickly through the capital and the country. The government could no longer contain the crisis that had been looming for years.” Two years later, the scene abruptly shifts to Tbilisi and the Great Tiflis Robbery, spearheaded and masterminded by a young revolutionary named Josef Stalin.

In 1917, the war-weary country erupts into chaos, revolution and violence. Khodarkovsky takes us to the Winter Palace to witness the events of October 25. “This was the beginning of the socialist revolution in Russia,” he writes, “that theorized by Marx and put into practice by Lenin. Arguably, it was also the most decisive event of the twentieth century, and the one that radically changed the history of Russia and the world around it.”

Russia’s road from Imperial autocracy to workers’ state is a bumpy one.  Khodarkovsky traces the lofty hopes and disappointments of the 1920s in episodes that chart immense social sea changes such the appearance of huge number of homeless children —“at least 7 million — and the series of purges in 1929 that saw the ranks of academics, intelligentsia, and the church decimated.

The chilling terror of the 1930s shows a society almost paralyzed by fear: the 1932 episode “Children against Parents” introduces the monstrous Pavlik Morozov, hailed a hero by the state for informing on his parents.

The horrific human toll of the Soviet experiment, a strong narrative thread throughout the book, is brought home in the entry for 1937-1938 about The Great Purge: “The scale of human destruction was shocking: by conservative measures, 1.3 million people were arrested during this time and over 681,000 were shot.  But even more destructive was a constant and pervasive fear, a topsy-turvy world, where yesterday’s executioner could become today’s executed, where a patriotic speech today could be deemed country-revolutionary tomorrow and were cheerful government propaganda coexisted with bloody reality…To survive in this netherworld of mass social schizophrenia, one had to learn how to reconcile the irreconcilable and suspend any critical judgement.  This kind of cognitive dissonance became one of the central features of Soviet society, where the unbridgeable gap between reality and rhetoric was a constant part of life.”

Khodarkovsky’s unflinching visit to the Siege of Leningrad in 1944 leaps from the page: “Anything that could be eaten was consumed: animal fodder, toothpaste, boiled glue. Any source of protein was also quickly devoured: cats and dogs, rats and birds, were all eaten. There were numerous stories of mothers smothering one of their children to feed the others, or someone killing a relative to feed the family…”

The shift in tone following the forties is palpable, but the horror does not abate: lesser known incidents such as the 1954 “Snowball” nuclear war exercise and its forty-year cover up is hard to digest, as are the staggering numbers of the 1959 Census, which reveal the toll of the Soviet experiment.

Khodarkovsky is a master of succinct pastiches, and he takes a breather in the post-war era to introduce us to some of that era’s best creative minds: square pegs who refuse to fit into the State’s round holes: Nobel laureates, Boris Pasternak and Alexander Solzhenitsyn, and the mercurial and tragic actor and singer, Vladimir Vysotsky, following “in the footsteps of several songwriters and performers, who, like him, were harassed by the authorities…[he] too desperately tried to survive on the edge of the Soviet precipice but was finally carried over that edge by his unbridled talent.” What a waste, we are obliged to conclude. What a tragic waste.

Many historians have failed to linger over Boris Yeltsin in the rush to parse the complicated career of his successor. But Khodarkovsky takes the time to consider Yeltsin’s role before he becomes the grave digger of the Soviet Century in a 1989 vignette about the burly Siberian when he was President of the RSFSR: “In September [1989], while visiting the Johnson Space Center in Houston, Yeltsin made an unscheduled visit to a neighboring medium-sized supermarket, Randalls. By all accounts, Yeltsin left the store heartsick. The contrast between the abundance of products in a run-of-the-mill American grocery store and the shortages and long lines for food and basic goods in the USSR was simply overwhelming…[later], in his memoirs, Yeltsin admitted that the visit to the store left him, ‘sick with despair for the Soviet people.’”

Yeltsin provides one half of another double-headed Janus figure at the end of the century and the book, and “Russia’s 20th Century” concludes with a sober epilogue introducing the other half of Janus: a figure who needs little introduction: Vladimir Putin, the leader who takes Russia into the 21st century.

“Putin’s Russia,” Khodarkovsky observes, is “a curious amalgam, a hybrid of the double-headed eagle of the tsars and the Soviet national anthem of the Communists.” Russia, he concludes, “was entering the twenty-first century with the same basic set of principles and values it had maintained throughout the twentieth century.”

On this sobering note, Khodarkovsky ends this marvelously crafted collection of stories, which, taken as a whole, chart the unforgettable history of the Soviet Century.

The beginning of the new century found Russia’s great writer, Lev Nikolaevich Tolstoy, at his house in Khamovniki, an old district of Moscow. Tolstoy believed that city life was a punishment and preferred to stay at his country estate in Yasnaia Poliana. Yet various social engagements and business matters compelled him to spend time in Moscow.

Tolstoy was not well. The aging and tired Russian writer was in a melancholy mood. Treated like a god by fellow writers and like a tsar by peasants, Tolstoy played the role of the wise, old, and unpredictable man. A welcome interruption from his daily routine came on January 13 with a visit from a young writer, Aleksei Maksimovich Peshkov, better known under his pen name Maxim Gorky (“gorky” literally means “bitter”).

The two writers were separated by what seemed like a chasm of age and experience: at seventy-two Tolstoy was the most venerable Russian writer, while the thirty-two-year-old Gorky was a rising literary star. Yet the two had a clear bond: they both had a great sense of affinity with the common people. Born into wealth and nobility, Tolstoy had chosen to reject “the sins of materialism” in search of moral self-improvement and to idealize peasant virtues. A carpenter’s son and an orphan since he was eleven, Gorky’s early life was one of misery and hardship; the privation of downtrodden working men and women became the main subject of his work.

Their meeting in early January 1900 was important for both writers. Tolstoy felt rejuvenated by the enthusiasm of the young writer, while Gorky was inspired by the enormity and profoundness of Tolstoy’s personality. Later that year, Gorky traveled to the Crimea to visit another ailing Russian writer, Anton Pavlovich Chekhov.

Chekhov was sick, very sick. He had tuberculosis but denied it until he suffered a major hemorrhaging of the lungs in 1896. Chekhov was a practicing physician and knew that he did not have many years left. His health required a warmer climate, and Chekhov decided to spend more time at his newly built summer house in the Crimean resort of Yalta.

Until Chekhov’s death in 1904, the house was a magnet for the best of Russia’s intelligentsia: writers, composers, singers, actors, and painters all visited Chekhov at Yalta. Yalta and its environs were studded with the mansions and palaces of top government officials and members of the imperial family. While both Russia’s governing and intellectual elite shared the same corner of the Crimean Peninsula, they continued to live in parallel worlds, which never seemed to have overlapped in the Crimea or elsewhere.

In the following years, Gorky and Tolstoy would return to Yalta to spend numerous days in conversation with Chekhov over the fate of Russia and humanity. At the dawn of the twentieth century, these three great Russian writers represented different strands of Russian philosophy and culture. Within several decades, the new Soviet ideology that came to dominate most of the twentieth century in Russia would leave little room for the universal love of Tolstoy or the psychological humanity of Chekhov. In the Soviet Union, they would be made into cultural icons prescribed for restricted viewing by a captive audience.

Only Gorky would live to see the most radical transformation of the country from the oppressive autocracy of the tsars into the brutal dictatorship of the Communists. In some sense, he absorbed both the monumental moral weight of Tolstoy’s philosophy and the deep humanity of Chekhov. He would never feel entirely comfortable with the Soviet cultural dogmas. Yet, at the beginning of the twentieth century, his search for justice turned Gorky into the bard of a new and rising class, the proletariat.

Excerpted from “Russia’s 20th Century: A Journey in 100 Histories” published by Bloomsbury Academic

Used by permission. All rights reserved.

For more information about Michael Khodarkovsky and his books, see the publisher’s site.

U.S. Says Drone Shot Down by Russian Air Defenses Near Libyan CapitalLeak of Classified Papers Ahead of U.K. Election Tied to Russian Operation