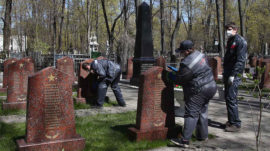 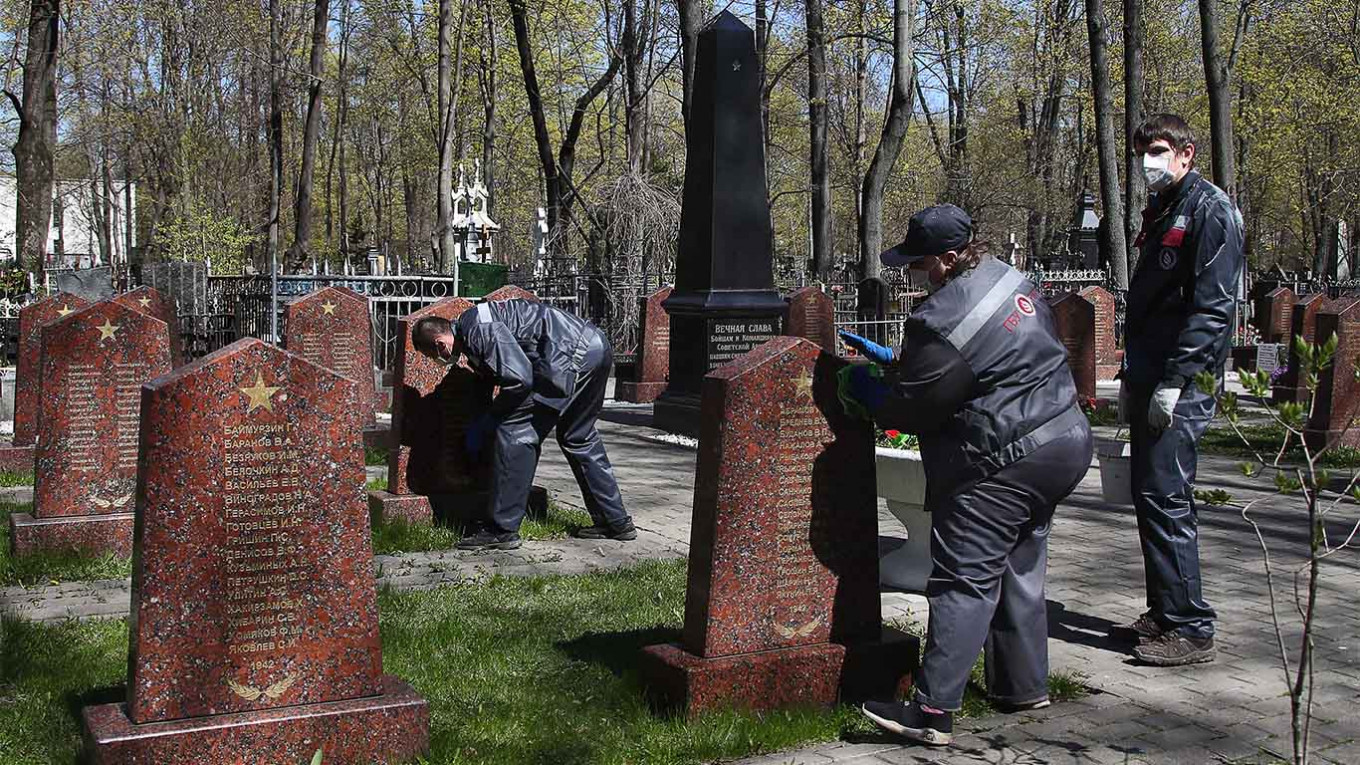 With strict lockdown measures in place nationwide, the coronavirus pandemic has dramatically changed Russians’ lives — and also their deaths.

Cemeteries in several Russian regions have closed to visitors to encourage people to stay home and slow the spread of infection, and since April 9, Moscow’s cemeteries have only been open to residents of the capital who are burying their dead.

And as Moscow has emerged as the epicenter of the coronavirus outbreak in Russia, the city’s funeral industry is turning to technology to allow residents to attend funerals without being physically present.

“After the self-isolation regime was introduced, demand for remote services increased significantly,” Artyom Yemikov, the head of Moscow’s largest funeral company, Ritual, told the Vedomosti business daily. At the same time, he added, the number of people attending each funeral has fallen to seven or eight people from an average of 50 since the city’s coronavirus lockdown began on March 30.

Coronavirus in Russia: The Latest News | May 5

Ritual, the past subject of high-profile investigations into corruption, has responded to this heightened demand by introducing online funeral broadcasts to allow people to grieve in self-isolation if they wish.

The company has held more than 100 live-streamed funerals since it made the option available in early April, Yemikov said.

At Ritual’s online funerals, each mourner receives an individual link to view the live-streamed ceremony on a closed platform. The broadcast is provided at no extra cost, and people can still attend the funeral in person if they prefer. The company also allows customers to select a burial site and order gravesite cleanings and maintenance online or by phone. However, customers are still required to come to Ritual’s offices to sign documents.

Open Agent, another leading funeral company in Moscow, has gone a step further, sending couriers to bring paperwork to individuals’ homes if they prefer to stay self-isolated, a spokesperson told The Moscow Times. The bereaved can then select a coffin, wreaths and other funeral items online and decide whether to hold the ceremony online or not.

When it’s time for the funeral, those who opt for the online option receive a link to a closed YouTube broadcast which shows the funeral service and the burial process.

“Filming funerals is not something new,” said Stanislav Baretsky, the head of the Moscow-based Professional Funeral Agents’ Union company who is also a well-known public figure in Russia.

“We did this long before the pandemic started. For example, a person might be in prison when his mother dies, so we film the entire funeral process and then send him the footage. … There are also many elderly people who cannot attend funeral processions due to health reasons.”

While the coronavirus may have changed how Muscovites attend funerals, the industry has yet to change its practices when burying those who have died from the highly contagious virus, despite evidence that it’s possible to catch it through contact with a dead body that has been infected.

Russian funerals gradually incorporated ancient Russian, Orthodox and even pagan traditions following the collapse of the Soviet Union, with funerals typically taking place on the third day after death. In religious families and small villages, the body will be kept at home until the day of the funeral — but more commonly, it will be sent to a morgue until the funeral service at a church. Russian Orthodox funerals are typically open-casket, with guests expected to bow in front of the coffin before kissing a ribbon placed on the forehead of the deceased.

But Rospotrebnadzor’s advice is not binding, Baretsky said, meaning it’s up to individual companies to decide how strongly to follow it. In Moscow and the surrounding Moscow region, which confirmed a combined 943 deaths as of Tuesday, Rospotrebnadzor’s recommendations are enforced to varying degrees.

“My colleagues in the Moscow region are not being given protective gear,” Baretsky said. “Cemetery workers who worry about their health might put on a mask or a protective suit. But this is not practiced [on a regular basis]. … This gear is very inconvenient for this type of work. It’s very easy to damage and tear it.”

When it comes to the funerals themselves, Rospotrebnadzor says that cremating bodies infected with coronavirus is optional, as is keeping the casket closed during a ceremony. Funeral agencies have merely been advised to limit mourners’ direct contact with coronavirus-infected bodies.

Baretsky said coffins made of zinc have been considered as one option for burying the bodies of people who were infected with coronavirus.

“We constantly get phone calls asking about the best way to bury a body amid a pandemic … There has been no law adopted or order enacted yet that requires us to use zinc coffins or anything like that … Zinc coffins emerged during the war in Afghanistan, just to transport the bodies of dead soldiers on trains. But these are complicated [and expensive] to implement.”

He added that he has suggested using a plastic package to encase the body instead, allowing mourners the chance to view the dead without compromising their safety.

“It may sound a horrible thing to do to a dead person,” Baretsky said. “But it is important for relatives to see the face of the person to whom they are paying their last tributes, and this idea combines hygienic and humane purposes.”

But such solutions require backing from the government if they’re to be implemented on a wider scale — and Beretsky says it’s low on their list of priorities.

“I believe the authorities don’t want to greenlight this or the zinc coffins because they would need a budget for it,” he said.