Russia’s Orthodox Church Sticks to Its Traditions Despite Coronavirus Threat 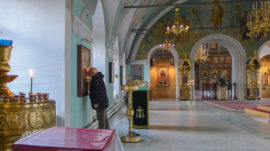 On a quiet Saturday outside service hours, worshippers walk with reverence through the shadowy interior of Moscow’s Yekhovo Cathedral, crossing themselves repeatedly in front of the rows of icons adorning the gilded walls. And then, in accordance with Orthodox practice, they end their silent prayers by touching their lips to the sacred pictures.

Nearly all of them are elderly, one of the most at-risk groups for the coronavirus that has swept the globe. Many of them believe that God, unlike the virus, will show mercy.

“The churches must not be closed. God sees all and will protect worshippers. In Italy the Vatican closed, and you see what happened there,” said Irina, a 59-year-old pensioner, pausing during a walk in Moscow’s Petrovsky Park this week.

As panic over the pandemic that has killed 21,000 has intensified — and churches worldwide have shut their doors to prevent its spread — the Russian Orthodox Church and its 164 million worshippers have been slow to change their ways.

Despite medical experts’ warnings that the coronavirus can be transmitted by saliva and survive on surfaces for days, thousands of worshippers lined up at Kazan Cathedral in St. Petersburg this month to kiss a holy relic with no form of sanitation except the occasional wipe with a rag. In the city of Kazan on March 15, video showed an Orthodox priest continuing to use a single spoon to serve communion wine to worshippers.

This seeming recklessness stems from a mindset within the Russian Orthodox Church — and in other Eastern Orthodox branches — that believes faith in God will protect the devout from illness.

On Sunday, a video of popular priest Andrei Tkachev entertaining his congregation by entering church to deliver his sermon wearing a gas mask prompted an outcry. “Turn off the television and there will be no coronavirus,” he told them. The video was later removed by the pro-Kremlin journalist who first posted it to Instagram.

Despite the indifference toward infection, the Church last week took some action by distributing sanitary rules to ensure people can continue to worship while minimizing the risk of transmission.

The list forbids worshippers from kissing the cross, the communion chalice or the priest’s hand during liturgies. It also calls for disinfection of the communion spoon after each use and the use of Q-tips to anoint parishioners. Worshippers will still be able to kiss icons, but churches are ordered to disinfect the icons between each use.

“If the virus spreads and the number of infections grows, if new orders from the authorities appear regarding the fight against coronavirus, the Church will respond to them,” said Metropolitan Hilarion, the head of the Church’s public relations department. “This applies both to the Church as a whole and to individual dioceses.”

Days after they were announced, it appears that some of the guidelines are not as binding as they may seem, with each diocese able to decide how strictly it wants to adhere to them.

None of the churches visited by The Moscow Times gave visible notice to worshippers that they should exercise caution during prayer. There was also no apparent standard in place for disinfecting icons. Only one of the churches said it had started disinfecting icons after each use due to the coronavirus. At another, an attendant hurriedly sprayed and wiped down the icons every hour or so.

“Some of these things cannot be stopped,” Hieromonk Konstantin, a priest at the Vysoko-Petrovsky Monastery in central Moscow, told The Moscow Times. “I’m not saying you cannot become ill from kissing the icons — you can. We have taken away many of the icons and try to disinfect the others as much as possible. But you can’t stop a person if they really want to do that.”

Hieromonk Konstantin said the monastery’s parishioners have shown mixed responses to the changes in their weekly services, which strictly follow the Church’s official guidelines.

“The older people are surprised and they register a certain degree of dissatisfaction with certain things. But I don’t think they really realize the depth of the crisis,” he said. “Here in Moscow it’s easy not to realize it because everything is running. We’re not in lockdown — yet.”

While the Russian government has shut down cultural venues, sporting events and all gatherings with more than 50 attendees to prevent the virus’ spread, it has largely given the Russian Orthodox Church free rein to operate as usual, apart from orders to start restricting attendance.

The Church says it has no plans to suspend its services even as the spiritual leader of the Eastern Orthodox Church has advised branches worldwide to do so. On Thursday, the Church said its Moscow services will continue as usual despite the mayor’s advice to the public to avoid church. It has, however, said it will work to limit the sizes of its services and will broadcast liturgies online.

Yelena, a 65-year-old pensioner passing by the Church of the Annunciation of the Blessed Virgin Mary in Petrovsky Park, said she would feel more comfortable if churches limited the amount of people allowed to pray at any given time.

“The church I’ve been in had closed the section where you buy candles and so forth, although the church was open,” she said. “Outside the church was a stand where you could write notes asking for prayers to be said. There was no one in the church at all. I think this is right – leave the churches open for individual worship.”

Russian epidemiologists view the Church’s measures so far as a positive step, but maintain that the best way to halt the spread of coronavirus is to close the churches until the pandemic is under control.

“Kissing icons and using one spoon during the sacrament will contribute to the spread of coronavirus among parishioners,” Viktor Zuev, a virologist at the Gamelei Institute of Epidemiology and Microbiology, told The Moscow Times. “In parishes where this has been forbidden, it should certainly be seen as taking positive preventive steps, but these measures work most correctly and most effectively when churches are closed for the period of the pandemic.”

“Of course the churches should temporarily stop services,” said Larisa, 60. “The idea of the healing protective power of God is ridiculous. God gave us reason and we ought to use it.”

But the Church stresses that shutting its doors is a last resort — especially with Easter, the most important Russian Orthodox holiday, just around the corner.

“We think that if we were to close the churches, there would be panic because Orthodox people here are very attached to religious observances,” said Hieromonk Konstantin. “It would be as if we were denying the people some sort of spiritual sustenance. We have to show them that we are with them and we are praying for them.”