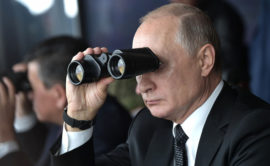 The Sept. 16-21 war games, which President Vladimir Putin observed Friday with his counterpart from the ex-Soviet republic of Kyrgyzstan, did not go off without a hitch, however.

At least two combat vehicles were destroyed in a landing exercise in Orenburg region that day, the Defense Ministry confirmed following media leaks showing the scale of the destruction Sunday.

“Both vehicles were damaged in a collision with the ground as a result of faulty parachute systems,” the ministry said in a statement carried by the state-run TASS news agency.

The Russian military said no crew members were on board the destroyed combat vehicles, but anonymous reporting suggested at least five paratroopers had been hospitalized with injuries in the BMD-2 mishap.

“I can’t hear myself,” a Zvezda reporter shouted into the microphone as explosions shook windows in a booth where Putin sat overseeing the drills.