Siberian Freighters Forced to Defreeze Ships in Minus 50 C 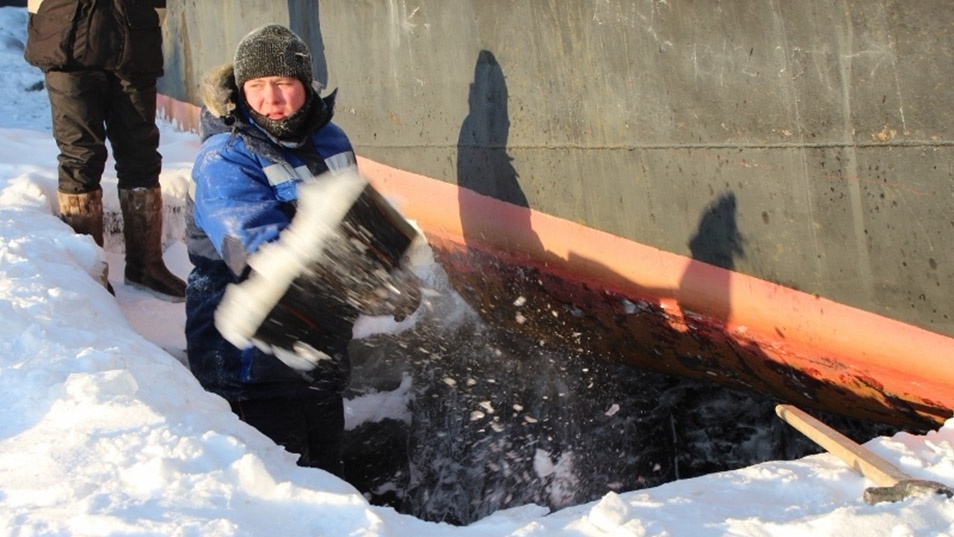 When the Siberian winter bites and the mighty Lena River freezes, workers at the Yakutsk shipyard brace for a backbreaking but vital task — vymorozka.

As Siberia’s summer is so short, freighters must be kept moving while the river, whose 4,400 kilometers carry the region’s economic lifeblood, is navigable. Repairs must be done in winter, when the river is frozen and the ships are wedged tight in the ice.

Vymorozka, which translates as ‘freezing out’, is the process of cutting away the ice from around a ship’s hull with chainsaws, then pickaxes and hammers, exposing areas needing repair, which are usually below the waterline.

It is a practice unique to Siberia, and has been going on as long as locals can remember.

Vymorozka is arduous and tedious; workers endure temperatures as low as -50 Celsius. The work may seem brutal, but it requires the accuracy and patience of surgery. The colder it is, the better.

“December and November were rather warm. The freeze is happening slowly. But the frost has begun, it is 46 [below zero, Celsius] today, so it’s all wonderful,” said Alexander Azarov, chief of the technical operation base at the Lena River Shipping Fleet.

As the ice is usually 50 centimeters thick, the bottom of the hull is still in water. The workers must carve away the ice to just the right thickness — about 20 centimeters — to let the cold air freeze the water below, allowing them to excavate even deeper.

If they make a mistake and break through to the water, an excavation can be submerged and weeks of work lost.

30 Russian Fishermen Rescued After Ice Floe Breaks Off to Sea

The Lena River Shipping Company is the biggest employer of vymorozchiki. At high season, in mid-January, around 30 people toil in the ice at Yakutsk, earning up to 400,000 rubles ($6,000) a season, well above the average Russian wage.

In the course of one winter, an experienced worker can ‘freeze out’ about four ships, removing thousands of cubic metres of ice.

Even ships not needing repairs are frozen out, so that when spring arrives, the ice thaws evenly, preventing distortion of the hull or ships listing.