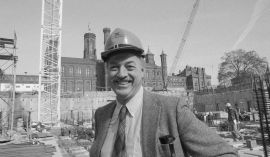 Robert McCormick Adams, who served as the ninth-number Secretary of the Smithsonian Institution from 1984 through 1994, died Saturday, January 27, in Chula Vista, California. He was 91. Passionate about his causes and compassionate toward his coworkers, Adams was a serious academic who eschewed the ivory tower in favor of bettering the lives of those around him in concrete, lasting ways.

It was in 1956 that Adams received his PhD in anthropology from the University of Chicago; he went on to conduct extensive field work in Mexico and across the Middle East. Books of his presented theses on the growth of the world’s first urban societies and the settlement of Iraq’s Diyala Plains, while numerous articles bearing his byline appeared in publications such as Science and American Anthropologist.

Adams brought his zeal for humane social and environmental inquiry with him when he assumed the position of Smithsonian Institution Secretary in 1984. He emphasized time and again the importance of the Smithsonian as a generator of academic knowledge—a role it continues to play to this day—while also taking care to ensure that the Institution remained committed to the members of the various communities it was serving.

“He brought in a set of values that had to do with diversity that were incredibly important,” Henson says. Adams spearheaded outreach efforts aimed at Latino and African American communities, and he was the reason the National Museum of the American Indian made the transition from conceptual limbo to on-the-ground reality. “Adams was the one who gets the legislation through,” Henson says, of the multi-year effort to fund and build the museum.

The ninth secretary’s commitment to increasing inclusivity at the Institution encompassed also the Smithsonian workforce. “He created programs for the staff to ensure upward-mobility,” Henson says. “Adams insisted that women and minorities be recurited for positions where they had historically been absent.”

Henson had a chance to work with Secretary Adams personally on a number of occasions—she recalls interviewing him for the Smithsonian’s Oral History Program—and remembers him as an intense but humble leader.

“Adams was a very serious guy,” Henson says, “but not pompous—more down-to-earth.” The friendly, accessible side of Adams is on full view in a photo of him and his wife Ruth contemplating a playful portrait of the secretary installed at the Smithsonian Institution Building, and in another in which Adams, clad in a herringbone jacket and tie yet also sporting a hardhat, oversees construction of the Smithsonian Quadrangle with a wide smile on his face.

“He took everyone quite seriously, and took his work very seriously,” Henson says. “But he was someone who didn’t view himself as above other people.”

Wendell Castle, The Man Who Made Furniture Dance, Dead at 85After Claims of Animal Cruelty, Can the Circus Survive?