“Solidarity is Always the Best Answer” 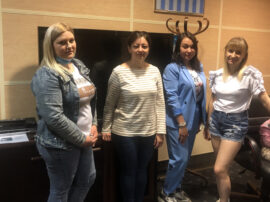 Oksana and her two-year-old daughter Sophia sit in a small lounge in Vnukovo airport in Moscow. They are one of several families with young children waiting together.

Sophia, like the other children there, has retinoblastoma, an aggressive and rare form of retinal cancer that can render a child blind and cause death within a matter of weeks if left untreated. Sophia has had cancer since October 2019 and has already lost sight in one eye. She struggles to see, often navigating by touch, grabbing the chairs and remotes spread out around the lounge.

When Oksana and Sophia first came to Moscow from Novosibirsk to treat Sophia’s cancer, doctors told them that their only option was to remove the eye completely. Oksana, unable to accept this, looked for other options.

Through a social-media page for parents of children with retinoblastoma, Oksana learned about a course of treatment at the Jules-Gonin clinic in Lausanne Switzerland. The treatment, begun in 2012 by Professor Francis Munier, head of the Department of pediatric eye oncology at the clinic, allows the tumor to be treated while preserving the patient’s eye. It is the only clinic in the world equipped to perform this treatment.

But then came coronavirus. Due to the pandemic, all commercial flights between Russia and Switzerland were canceled. But Oksana and Sophia, along with the several other families, were on their way to Switzerland despite the travel ban. They were about to board a private jet organized by the Swiss Embassy and paid for by private donors.

“There is a whole network of solidarity around these children,” Yves Rossier, Swiss Ambassador to Russia and the main organizer of the program, told The Moscow Times.

The program to transport the children first began in April when the father of a young boy named Tair contacted Rossier about getting to the clinic in Switzerland to treat Tair’s cancer. Due to the cancer’s aggressive nature, missing or postponing even one treatment could be too late for the child.

With help from his French colleagues, Rossier got Tair and his parents on a flight to Paris, where a military bus from the defense ministry transported them to the clinic in Lausanne. Before their flight to Paris, Tair and his family stayed at the Swiss embassy residence in Moscow and celebrated Tair’s second birthday with Rossier with a cake and candles.

“For me, the matter was settled. But two days later on Friday, I got ten emails. All these parents of children with this cancer are in contact with each other…I thought: What do I do?”

Rossier spent the entire weekend making phone calls. Realizing that repatriation flights were unreliable and that these children could not risk waiting, Rossier realized that the only viable option was private jets. With the sponsorship of Swiss Olympic ski champion Jean-Claude Killy, Rossier organized the first two flights to Switzerland in May, each transporting between 10-12 children and their accompanying parents. The flights in June were sponsored by Russian businessman Viktor Vekselberg, and flights in July were paid by  Gennady Timchenko.

Every month Rossier now prepares the flights for the next month, organizing the flights and finding donors for the 100,000-euro trips. He will continue to do so until commercial flights are resumed, whenever that might happen.

“In times of crisis, you have two reactions. Either you go it alone and do not care about the others, or there is solidarity. And I think solidarity is always the best answer.”

As Oksana and Sophia prepared to board the private jet along with the other families, a flight landed with parents and their children who had just finished a round of cancer treatment. Yelena was one of those parents, returning after a week at the clinic with her daughter. “Everything went amazingly well and was of the very highest quality. The organization, preparation, and flight were great…Now we only just to return in September for the next course of treatment.”