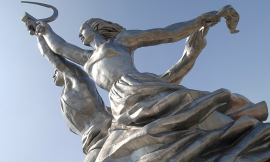 Eighty years ago on this precise date, workers at the World’s Fair 1937 in Paris put the finishing touches on the landmark icon of Soviet monument sculpture that was destined to become the trademark symbol of the whole era in Soviet/Russian culture, arts, ideology, urban development, and other spheres.

Designed by Vera Mukhina, the ‘Worker and Kolkhoz Woman’ was installed at the USSR’s pavilion at the then Paris-hosted fair. Made of stainless steel, the factory worker and the collective farm woman were proudly holding a hammer and a sickle over their heads.

From foot to the edge of the sickle, the sculptural composition was 24.5 meters high and it offered an instance of a brilliant combination of the socialist realistic style and art deco. Upon the end of the World’s Fair, the composition was disassembled and moved to Moscow where it re-emerged near the territory of the All-Union Agricultural Exhibition, which later turned into the All-Union Exhibition of Economic Achievements (VDNKh) and the All-Russia Exhibition Center as it is known today.

The Worker and Peasant Woman was designed especially for the Soviet pavilion at the World’s Fair. The idea came from Boris Iofan, one of the exceptional men of Soviet architecture and city planning who produced the design of the very same pavilion in Paris. He also went down in history as the author of Moscow’s abortive Palace of the Soviets project.
Iofan put forward a two-figure composition made from metal that would feature a young man and a young woman holding a hammer and a sickle at the height of their fully-raised hands as the symbol of a union between the factory working class and the collectivized Soviet peasantry.

Sculptor Vera Mukhina, whose works had already appeared at international exhibitions, won the competition for the right to design the monument. Her sculpture of a collective farm woman was the central exhibit of the Soviet pavilion at the 19th Venice Biennale in 1934.

Mukhina altered Iofan’s design by adding dynamism and an air of loftiness to it. She imparted a thrust-forward posture to the figures and furnished the woman with a 30-meter-long scarf.

She said the sculpture was to express “a robust and overpowering drive that characterizes our entire country.” Also, she chose stainless steel as the material for the weight-bearing frame and external panels.
The authorities commissioned the development of the 48-tonne steel frame for the sculptural group to the Stalmost factory in Moscow. The works, which the factory conducted non-stop, took almost half a year.

Eventually, the sculpture was dismantled, placed into twenty-eight cargo coaches and dispatched to France.

Reassembly of the grandiose sculptural ensemble in Paris took 11 days. Having been given a plot of land only 30 meters wide complicated the task. The workers assembled 46 fragments in all. The sculpture was placed on a 34-meter pedestal in the pavilion, right in front of the pavilion of Nazi Germany, which had the form of a 60-meters-high tower with an eagle and a swastika at the top of it. Contention between the two pavilions, two ideological systems and achievements of both countries was one of the distinct features of the World’s Fair in 1937 and Mukhina’s masterpiece received a Grand Prix.

Mukhina was not allowed to attend the sculpture’s dismantling following the fair’s closure. The dismantling team damaged it seriously and its restoration required another two years.

In 1939, the authorities put up the Worker and Peasant Woman by the northern entrance to the All-Union Agricultural Exhibition on a 10-meters-high platform, which Mukhina called somewhat derisively “a stump”. Several decades later, a reassembled pavilion named “Moscow” popped up behind the sculpture. It was designed for another event in the World’s Fairs series – Expo’67 in Montreal.

Vera Mukhina asked the government on a number of occasions to place the monument on to a taller platform that would be similar to the one, which it premiered on in Paris. In fact, her dreams went much farther than the pedestal, she envisioned the Worker and Peasant Woman standing somewhere on the meandering shores of the Moscow River or hovering over Sparrow Hills, which was the highest geographic point on the then outskirts of Moscow.

Still her requests fell on deaf ears and the monument remained towering by the northern entrance of the Agricultural Exhibition.

In 1941, the Soviet government awarded Mukhina’s work with the Stalin Prize, the country’s highest prize at the time.

Throughout the 80 years of its history, the Worker and Peasant Woman earned the status as the trademark symbol of the Soviet era and the city of Moscow. It also became the logo of the USSR’s largest filming studio, Mosfilm. It appeared in this role for the first time in 1947, in the comedy ‘Spring’ directed by Georgy Alexandrov. In the logo, the monument was placed against the background of the Spassky Tower of Kremlin.

In 2003, Moscow City government adopted a decision to reconstruct the sculpture because of corrosion developing at the weight-bearing frame and on the surface of the composition. The monument was dismantled into 40 structural elements and taken to the Central Research Institute of Building Constructions.

Specialists had to replace 250 of the 6,000 steel sheets and to manufacture a new frame, since erosion had eaten away 80% of the attaching parts.

The sculpture returned to its original position by the northern entrance of the All-Russia Exhibition Center on November 28, 2009. The statue now stands on a new 34.5-meter-tall pedestal just as in Mukhina’s original proposal.