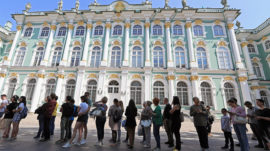 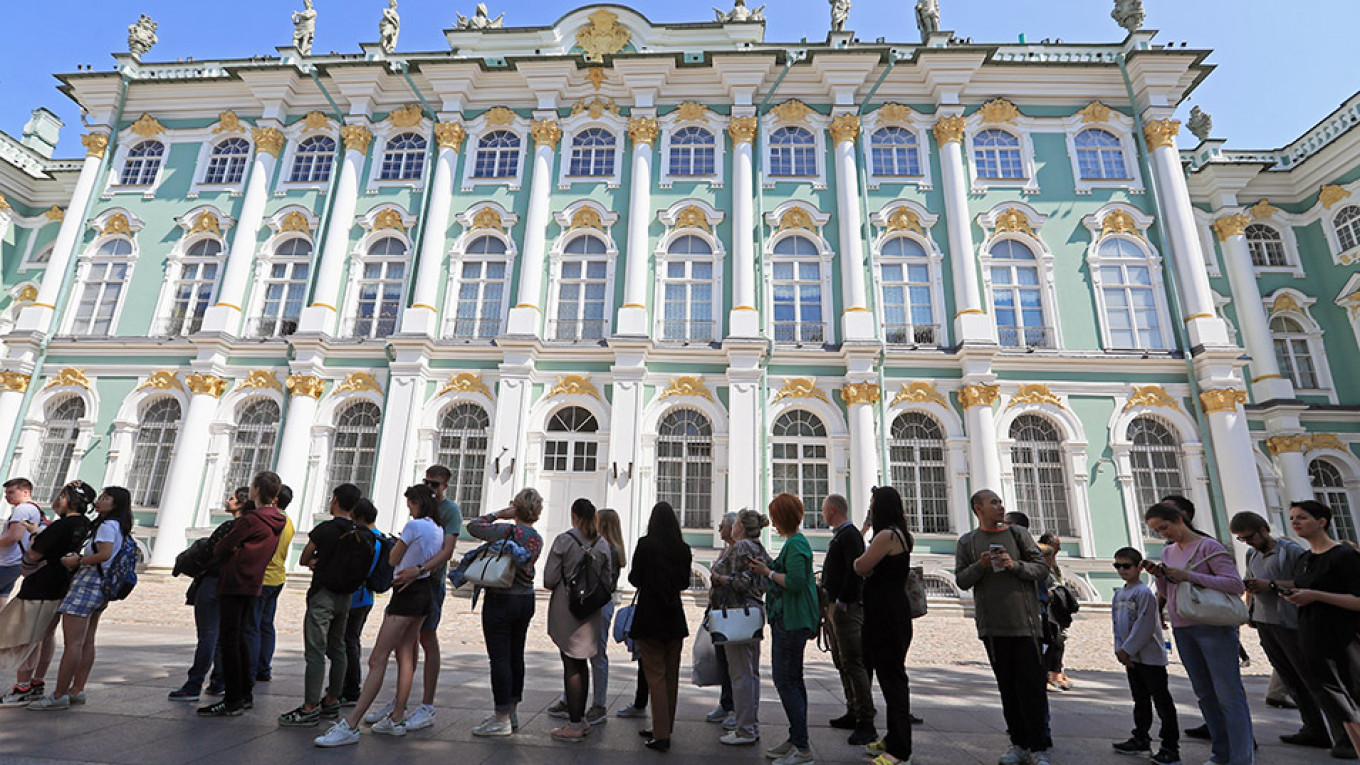 ST. PETERSBURG — Marina Pogolsha gestures toward two scantily clad women gyrating in the window of a new strip club across the road from her apartment building on Rubinstein Street in St. Petersburg’s historic center.

“That’s what the view from my living room window is now, welcome to hell,” she says.

Locals like Marina, 52, who has lived on Rubinstein all her life, blame its rapid transformation from an elegant residential street to a noisy and garbage-strewn bar area on the authorities’ failure to regulate the consequences of a recent explosion in the number of tourists.

Many fear the worst is yet to come as the government launches a drive to lure more foreign tourists — and their cash — to St. Petersburg. If the growth continues unchecked, experts say the city may soon end up like Prague and Barcelona — overrun by holidaymakers seeking alcohol and thrills.

“They’re trying to turn our city into some kind of carnival,” Marina says. “St. Petersburg’s status as Russia’s culture capital used to mean something.”

Thanks to a pilot program launched earlier this month, tourists coming to St. Petersburg and the surrounding region from a list of 53 countries can now apply for free visas in a simplified online process. The program is unique to the city, and tourists seeking to visit other Russian cities will still have to apply at a consulate and pay. Over 650 tourists arrived in the first weekend of the program.

Soon, however, thousands more are expected to fly in on low cost European airlines like Ryanair, EasyJet and Wizz Air — which announced plans this month to open new routes to St. Petersburg, following the news that the city’s Pulkovo Airport would receive “seventh freedom flights” under which foreign airlines don’t need to be registered in Russia to fly direct.

The government forecasts that an additional 2 million foreign tourists will come to the city each year from 2021 thanks to the new efforts, on top of the 4 million who visit now. The influx is expected to add up to 9 billion rubles ($138 million) to the city’s budget, which officials say will be earmarked toward long-overdue renovations of the city center and tourism infrastructure.

Nana Gvichia, vice director of St. Petersburg’s committee for tourism, said that apart from economic benefits for the city, the tourism drive is part of a long-term government strategy to improve Russia’s appeal abroad.

“An increase in the number of tourists will help the image of our country — they will act as messengers outside Russia who will spread the message that our country is safe and beautiful,” she said, citing the positive example of the 2018 FIFA World Cup.

Long lines and a hostel ban

Experts in the tourism industry, however, believe St. Petersburg lacks the infrastructure to host an additional 2 million tourists every year.

“The museums in St. Petersburg and its suburbs have already reached their maximum capacity and cannot meet the demand, while the flood of tourists continues to grow,” she said.

“We simply can’t accommodate all of the people who want to visit our museum,” the museum’s director Olga Taratinova said last month in an interview with the local Fontanka.ru news website.

Long lines have also affected other sights in the city like the Hermitage Museum and Nevsky Prospekt in what has been called a “tourism collapse” during the May to September high season.

Meanwhile, critics say a government ban on hostels in residential buildings that came into force on Oct. 1 — the same day as the e-visa scheme — is exacerbating the problem.

The city’s 46,000 hotel and hostel rooms were already stretched to capacity and the number of beds available may fall by another 10% following the ban, according to estimates.

“We don’t know what will actually happen and what we’ll be left with when the high season begins again in spring 2020,” Tamara Builova, the vice-president of the Association of Small Hotels in St. Petersburg, told Fontanka.ru.

Other experts in the tourism industry say that St. Petersburg is still far from reaching the critical mass of cities that suffer from “overtourism” like Paris and Rome — where the ratio of annual tourists to locals can reach 20 to one. In St. Petersburg, the ratio is currently only 1.5 to one.

Answering these concerns, the city’s tourism committee says that the infrastructure is ready and that up to 300 new hotels will be opened over the next year thanks to new government-backed incentives for investors. But experts fear it won’t be enough.

Back on Rubinstein, Marina is joined by Kirill Polisaev, 49, another concerned local, for a stroll through the packed sidewalks of their street on a chilly Saturday night. They point out numerous violations of the city’s noise and sanitary regulations.

One restaurant is blasting music from a speaker near its entrance, though it is past the 10p.m. curfew set by the city. A few steps away, a ventilation pipe from a steakhouse pumps the aroma of grilled meat into a private courtyard, attracting a swarm of rats.

Together with other locals, Kirill and Marina have set up the Residents of Rubinstein NGO to restore order to the street.

“The authorities don’t pay attention to what’s happening in the city so we realized that we are our only hope — you can say we’re united by our misfortune,” Kirill says with a laugh, adding that Rubinstein now has 82 bars and restaurants concentrated in just 34 residential buildings.

Neither of the activists blames tourists though. They say that local businesses are at fault for trying to make a quick buck while the government turns a blind eye.

Marina points out “For Sale” signs in windows along the street and says many locals have already moved out in the three years since the bars moved in.

“I’m afraid to come home at night, there are drunk people from all over the world here who behave aggressively — it’s pointless to ask anyone to keep the noise down,” she says.

The Residents of Rubinstein have begun to fight back, recording violations and taking the bars to court, while simultaneously petitioning the government. They have also called for a ban on alcohol sales after 10p.m.

Kirill walks up to a bar in the courtyard of his apartment building that he says was shut down by Russia’s consumer watchdog, Rospotrebnadzor, after he filed a complaint.

As he peers at the “closed” sign on the front door, a party of locals tries to get in and he tells them he helped to get it shuttered.

“You guys have really f—— ruined our night, we were really looking forward to this,” says Artyom, a 40-something legal worker. “There are free e-visas for tourists now; you know what’s coming to the city, right? It’s all about the cash.”

Kirill tells him the street won’t be taken over because the law is on the residents’ side.

“We’re not at war, we’re living in peacetime, and we’re capable of defending our rights,” he says.