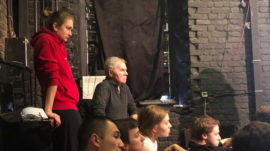 In stuffy room with painted black walls, a group of students clap vigorously as if applauding a performance. Then they seem to be a shower, rubbing their faces and necks, before throwing their arms forward with loud shouts of “Ha!” From the front of the room, an older man observes them intently.

For an outsider with no context, this presents a strange spectacle.  But this is no madness: This is an acting class taught by Oleg Kudryashov, and the exercise is the “Actor’s Toilette” – one facet of the method of the world-renowned theater director Konstantin Stanislavsky (1863 – 1938)

The Moscow Times visited The Russian Institute of Theatre Arts (GITIS) and The Boris Shchukin Theater Institute to find out more about Stanislavsky’s legacy and how his famous system is taught today.

Konstantin Stanislavsky was an actor and director, most famous for his work at the Moscow Art Theater directing plays by Anton Chekhov. The great innovation of his work as a director was the naturalness of the performances, which was in contrast to the mannered acting typical at the time. To achieve that naturalism, he developed his “system.”

Stanislavsky’s own reflections on his system filled five books: “My Life in Art” (1924); “An Actor Prepares” (1936); “An Actor’s Work” (1936); “Building a Character” (1949); and “Creating a Role” (1961).  The essence of the Stanislavsky system is using emotional memory and inhabiting the psychology of their role to create a believable character on stage.  In the words of Boris Shchukin acting teacher Kirill Malov, Stanislavsky “built his system not from the brain, but from life.” 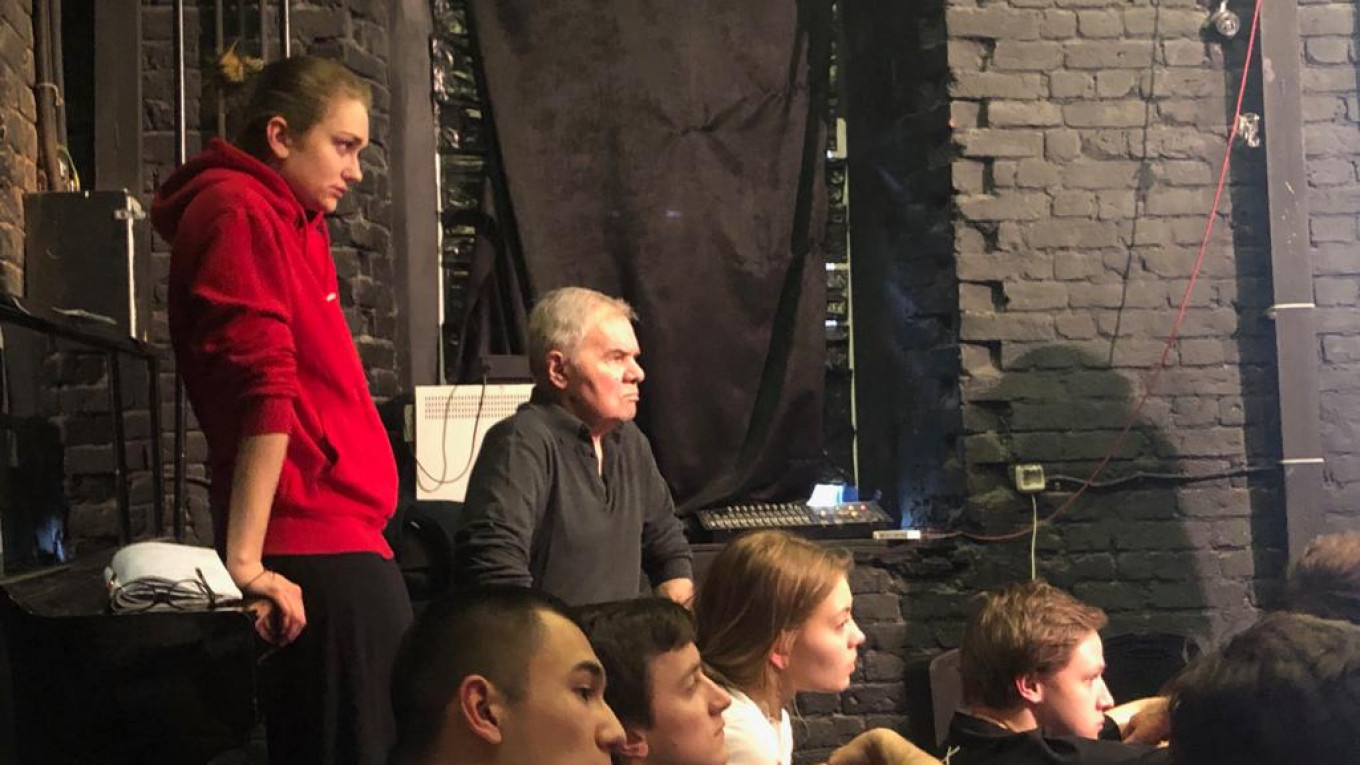 Oleg Kudryashov and students watch an Etude Courtesy of GITIS

At GITIS, teacher Pasha Savchuk was working with his students on the Étude – an exercise in which students improvise until told to stop by the teacher.  “It is not just an exercise,” Savchuk said, “but the underlying logic of our rehearsals.” In his class, the Études were followed by intense discussion. Savchuk questioned the audience. What did they get from the Étude? How did it make them feel? Savchuk would often critique their comments: “I am not asking you for your analysis. I want to know how you felt,” he told one student. Then he turned to the actors: What were their motivations? What was their back story? “What do you want?” he asked them.

The Étude need not be verbal. In Kudryashov’s class, students improvised using only their bodies and eye contact.  “Don’t rush!” he shouted as two students contorted themselves into all manner of positions. “Develop the role! Develop!”

In every Étude, he said, there should be conflict, and an actor’s every action should be a response to the actions of their partners. It was a surreal display – one male student even scaled the wall and hung from a ceiling ventilation pipe. But, in the Stanislavsky system, the surreal is a getaway to real. This exercise, said Kudryashov, is crucial for eventually being able to inhabit a character.  GITIS students spend their entire first year mastering the Étude before they are allowed to touch any scripts.

Études can last between thirty seconds and five minutes depending on the teacher’s instruction.  “The hardest aspect of the Étude for students is communication,” Kirill Malov said. “The younger generation has grown up with computer screens and their phones, so they don’t know how to communicate – not just with words, but with the body.” 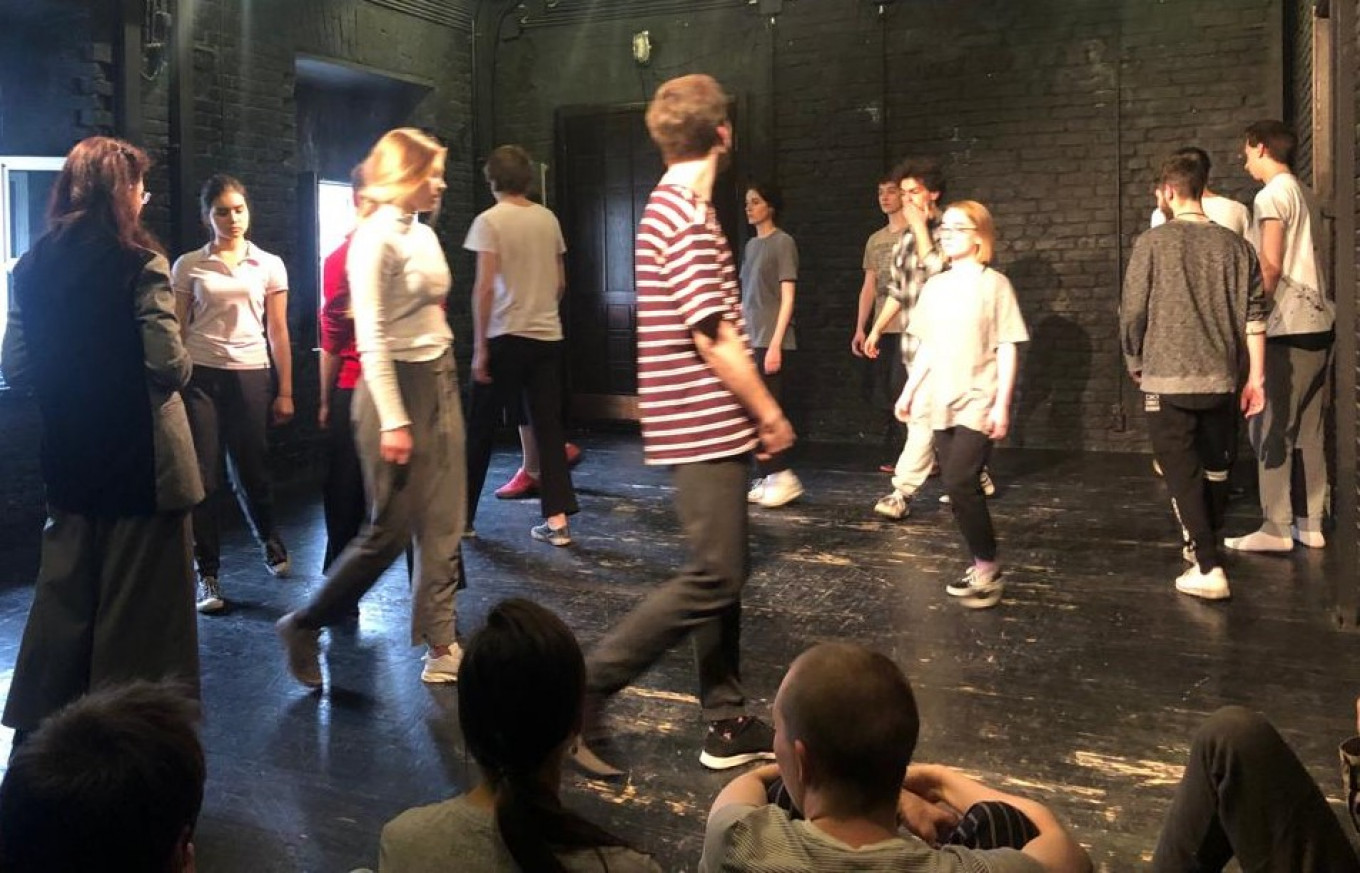 Acting students working on their Etudes Courtesy of GITIS

Rupert Sadler is a British actor who trained at the Boris Shchukin school. “I think the greatest strength of that school and Russian drama in general is the focus on the body as a tool,” he told The Moscow Times. “In the U.K., we have Shakespeare and Pinter, so we let the words do the work. At the Boris Shchukin School, training the body comes first.”

In Kudryashov’s class, students were given playing cards and told to ‘be’ a number or figure without speaking. Other students then had to guess which card they were. Sonia, 20, is one of Kudryashov’s students.  These exercises, she said, “are physically and emotionally tiring. We give everything – but that is what we have to do or there’s no point in being here.”

The genealogy of Stanislavsky

“I am the fourth artistic generation” Pasha Savchuk says. “Every teacher has his or her genealogy.”

GITIS and the Boris Shchukin Institute both claim illustrious genealogies. GITIS was founded in 1878. Vladimir Nemirovich-Danchenko, who in 1898 would cofound the Moscow Art Theatre with Stanislavsky, was among its early teachers. The Boris Shchukin School was founded in 1914 by actors of the Moscow Art Theater, with Yevgeny Vakhtangov as their leader.

Although the ‘Stanislavsky system’ sounds like a unified teaching approach, Savchuk stresses that this is far from the reality. Stanislavsky’s books are less step-by-step guides and more reflective autobiographies in which Stanislavsky constantly adapted and rethought his techniques. According to Savchuk, many of his students and admirers – such as Strasberg – were selective in the aspects of the system they taught.

This system is more of a philosophy that guides the entirety of an actor’s preparation and embodiment of a role. As Lev, a 19-year-old GITIS student, told The Moscow Times, “Stanislavsky’s system teaches us to awaken our human nature and embed it in our art.  It teaches you to be yourself, to be free, to be authentic. It is the basis of everything.”

Below is Stanislavsky at a rehearsal of “Tartuffe” in 1938.

The Russia-Trump Links in Mueller’s Report, ExplainedPutin Ally to Ukraine’s Probable New Leader: Do Deal and Get Territory Back