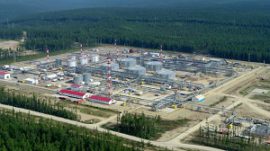 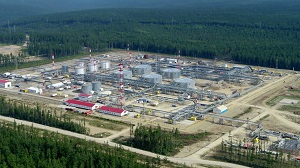 In 2018, Taas-Yuryakh Neftegazodobycha increased its oil production to 2.9 million tonnes, which is more than two times higher than in the previous year.

The significant increase in oil production was achieved due to the completion of construction and commissioning of the main oil production, preparation and transportation facilities as part of the second stage of the field development, as well as due to the implementation of the multilateral well drilling programme. The total length of Fishbone horizontal side-tracks in the pay interval of wells amounted to more than 5,000 metres. This is considered to be within the record rates of penetration through an onshore reservoir in Russia.

A complex of advanced technologies is used for construction and research of such wells, including rotary steerable systems and advanced LWD tools. As of late 2018, the producing well stock at Srednebotuobinskoye oil and gas condensate field amounted to more than 150 units, with over 250 thousand metres of rocks drilled.

Taas-Yuryakh Neftegazodobycha conducted a range of geological and technical activities aimed at maintaining oil production in the base stock; a programme to optimise the reservoir pressure maintenance system was implemented.

All work was carried out in conditions of challenging logistics and harsh climate of the Republic of Sakha (Yakutia).

In accordance with the Rosneft-2022 Strategy, Taas-Yuryakh Neftegazodobycha applies most effective innovative technologies for field development, designed to boost oil production and optimise the development of Srednebotuobinskoye field.

Taas-Yuryakh Neftegazodobycha LLC develops ten licence blocks located in the Sakha Republic (Yakutia). The enterprise is developing the Central block and Kurunga licence block of the Srednebotuobinskoye oil and gas condensate field being one of the largest Rosneft’s assets in East Siberia.

In 2016, Rosneft finished the establishment of an international hub on the basis of Taas-Yuryakh Neftegazodobycha where the Company holds 50.1% of shares while the consortium of Indian companies, including Oil India Limited, Indian Oil Corporation Limited and Bharat PetroResources Limited, holds 29.9% and multinational corporation BP holds 20%.