Tens of Thousands Rally in Belarus Despite Mass Arrests 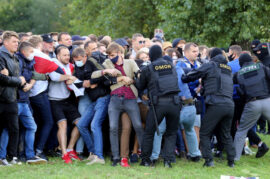 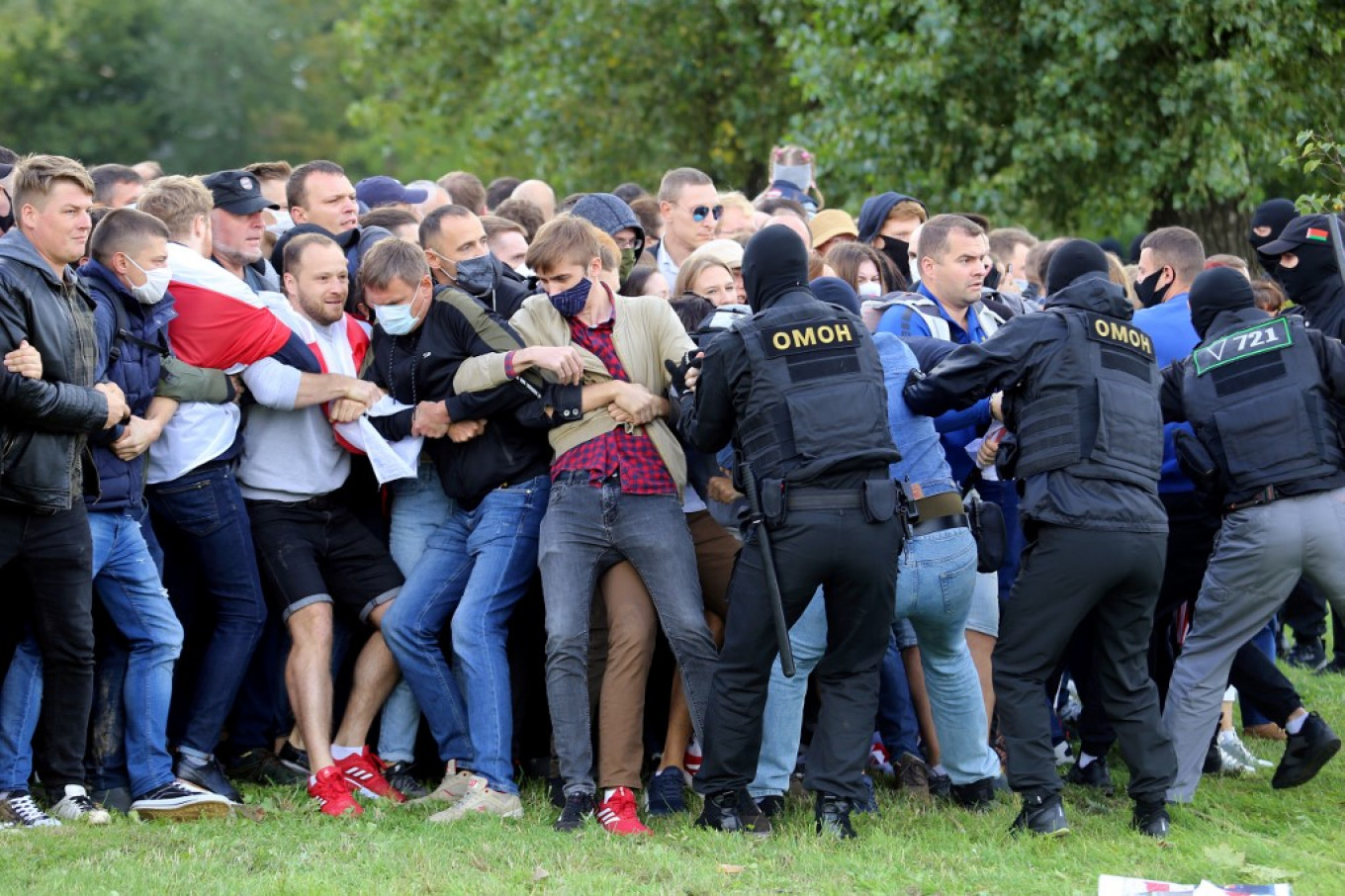 Riot police harshly detained more than 400 demonstrators in Belarus on Sunday as tens of thousands of people took to the streets, on the eve of crunch talks between strongman Alexander Lukashenko and his main ally, Russia’s Vladimir Putin.

More than 100,000 people are estimated to have marched in Minsk on each of the past four weekends to demand Lukashenko resign over a disputed Aug. 9 presidential election, which he claimed to have won by a landslide.

AFP journalists said a similar number took part in the latest demonstration, with huge crowds flooding the streets despite an intensifying police crackdown.

Masked police officers in uniform and plain clothes violently detained people who gathered for the “March of Heroes” demonstration, pushing or punching them, video posted on the Belarusian news site Tut.by showed.

Police also resorted to the use of a pump action shotgun, firing a “warning shot” in the air during a scuffle, the interior ministry said.

Access to mobile internet was limited and central metro stations closed, with authorities moving police vans, military vehicles and barbed wire into the centre ahead of the protest.

“More than 400 people were detained in various districts of the capital,” the interior ministry said in a statement, adding that those detained were carrying flags and “offensive” placards.

Thousands of demonstrators planning to head towards Lukashenko’s Palace of Independence residence and a second at the upscale Drozdy compound were blocked by police, with some officers seen dragging people across the tarmac.

Thousands more protesters took to the streets in other cities including Gomel, Grodno and Brest, where police used water cannon against demonstrators.

Belarusians have been demonstrating against Lukashenko’s disputed re-election for a month, with the protest movement showing no sign of dying down.

“I came out for freedom and I am going to protest until we win it through peaceful means,” 60-year-old marcher Oleg Zimin told AFP.

He said he did not vote for Lukashenko last month. “He always lied to us,” he said.

The opposition urged Lukashenko not to “sell the country” ahead of his first face-to-face meeting with Putin since demonstrations began, which is set to take place in Russia on Monday.

“This country is not for sale,” read one placard at the march. “Putin, don’t grab (Belarus) or you’ll choke,” said another.

Andrei Gorbachevsky, a 29-year-old doctor, accused Putin of treating Belarus as if it were a Russian province.

“He is supporting Lukashenko’s regime, he’s playing a strange game and that’s why our people no longer trust him,” he said.

Putin and Lukashenko are set to meet in the Black Sea resort of Sochi, with the Kremlin saying the talks will cover plans for closer integration between the neighboring countries as well as key trade and energy projects.

Putin has been keen to unify Russia and Belarus, and Moscow has accompanied its offers of military and economic aid with calls for tighter integration.

Analysts say Putin may seek to exploit Lukashenko’s political vulnerability to wring concessions from him, but any agreements compromising Belarus’s sovereignty and independence are likely to enrage Belarusian protesters further.

Sunday’s demonstration came as Lukashenko’s security forces have stepped up arrests of senior opposition figures who are still in Belarus.

After a massive protest last Sunday, Maria Kolesnikova, one of three prominent women opposition figures, was jailed after she resisted expulsion and tore up her passport.

More than 600 people were detained last Sunday, while on Saturday riot police violently detained dozens of women demonstrators during a smaller protest in Minsk.

Presidential candidate Svetlana Tikhanovskaya, who the protest movement says won the vote but was forced into exile in neighboring EU member Lithuania, paid tribute to demonstrators ahead of the march.

“Over the past month we have become a truly heroic people,” Tikhanovskaya, a political unknown until the election, said in a video address.

Lukashenko, who has ruled the ex-Soviet state for 26 years, has refused to step down and has turned to Russia for support to remain in power.

His security forces have detained thousands of protesters, many of whom have accused police of beatings and torture. Several people have died in the crackdown.

On Friday, the United States said it would impose new sanctions on Belarusian figures within days and warned Moscow that continuing to back the strongman would only alienate Belarusians.