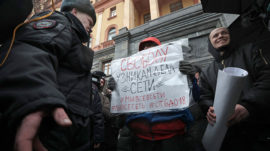 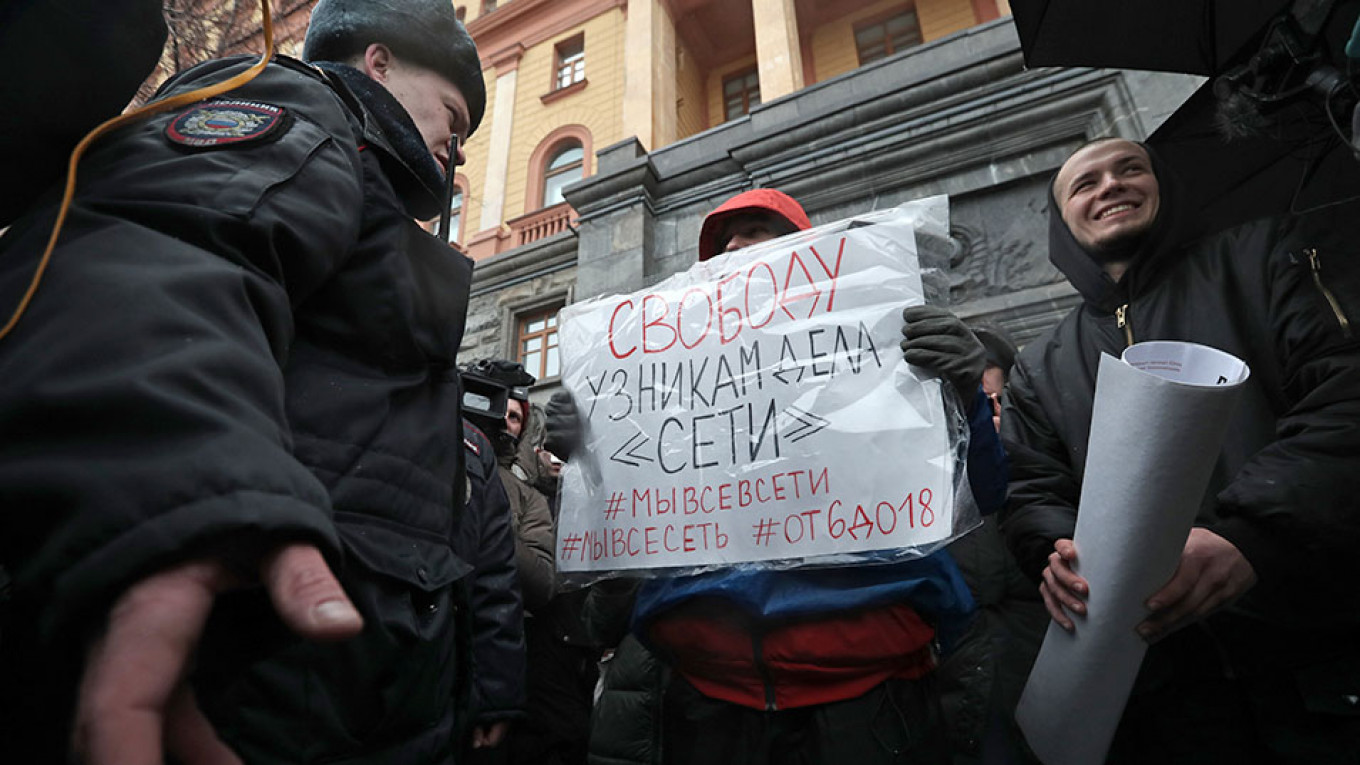 Russian scientists, teachers and other groups of professionals have signed open letters in support of seven young men who were jailed last week on what they call fabricated charges of terrorism.

A court in the central Russian city of Penza last Monday sentenced the seven members of an anti-fascist group called Set to prison terms between six and 18 years. The defendants say they were tortured into giving incriminating testimony, and human rights activists say the evidence against them was fabricated.

The open letters come amid single-person pickets in support of the convicted Set members, as well as detentions of picketers, in Moscow, St. Petersburg and Penza. They also mirror a similar series of open letters published by groups of Russian professionals following the prosecutions of anti-Kremlin protesters in Moscow last summer.

More than 2,700 Russian scientists signed an open letter calling on the authorities to drop the sentences and punish officials involved in the alleged fabrications of evidence.

“The blatantly unjust verdict shows the complete paralysis of our country’s independent judicial system,” they wrote.

“In contrast to those fictional ‘terrorist attacks’ that the convicts were allegedly ‘planning to plot,’ the ruling in the Set case is a real act of terror that deals a cruel blow to the foundations of Russian statehood.”

“Terror against our own citizens is incompatible with the normal course of development for our country and is destructive to its science, culture and education.”

More than 2,500 writers, publicists and journalists have signed an open letter in support of the Set convicts.

“Every day on the internet, we spread the truth about you, about the illegitimate and unjust charges brought against you,” they wrote.

Some 500 teachers across the country signed an open letter condemning the jail sentences for “contradicting the humanistic principles that guide us in educating the younger generation of Russian citizens.”

“We believe the case is fabricated: the court is used to intimidate our own people,” the teachers’ union wrote.

“The Set defendants are recent graduates, our former students and idealists. Their harassment and trial is a verdict on all of us, on our work and on our hopes for a bright future.”

More than 200 psychologists signed an open letter in support of the convicted Set members.

“This situation is a shock for Russian citizens. It creates the conditions for violence, oppression and the development of dangerous mental problems in our society,” they wrote.

A dozen bookstores in Moscow, St. Petersburg, Penza and other cities declared plans to close on Monday and take part in single-person pickets in support of the Set defendants.

“How can we sell enlightened, timeless, noble books when people are being tortured?” they wrote. “How can we encourage the appreciation of the ‘classics’ when courts ‘sentence’ books to destruction in every school or local library?”

“How can we call on someone to empathize with the protagonists of their favorite books when you can get a de-facto life sentence for an idea, an expressed fantasy?”

More than 90 Russian artists, art historians, gallery owners, museum workers and more signed an open letter to oppose the verdicts and condemn the torture allegedly carried out by law enforcement officials during the case.

“Torture not only cripples the souls and bodies of people. It destroys society, the nation and, ultimately, the state,” the letter says.