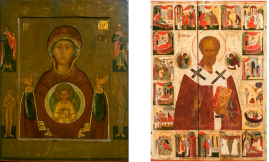 The XVI century in Novgorod’s art history is a time of true rise but it still never had been an object of a special exhibition project and shown as a whole artistic phenomenon.

The goal of the exhibition is to gather art pieces of the epoch of prelate Macarius, archbishop of Novgorod (1526-1542), metropolitan of Russia (1542-1563), a key spiritual figure of the time of Ivan IV (the Terrible). The most significant political, cultural and ecclesiastical events were connected with his name, and also a large number of real masterpieces of Old Russian art appeared at that time – hand-written books,unique icons, metal, sewed and woodcarving liturgical utensils.

The collection of the Russian Museum contains one of the most significant art objects of Novgorod dating back from the XVI century – the carved gilded Ambo from St. Sophia Cathedral in Novgorod created by an initiative of archbishop Macarius in 1533. The exhibition will demonstrate this unique object after the completion of its restoration in Russian Museum as well as other masterpieces of the artistic heritage of this major art center of Old Russia, which largely determined the character of the Russian religious art.

The exhibition will comprise unique art pieces from the collection of the Russian Museum and other museum collections as well as multimedia, photographic and video materials.

Vasily Vereshchagin. To the 175th Anniversary of the ArtistAnna Azbel. Childhood Portrayed