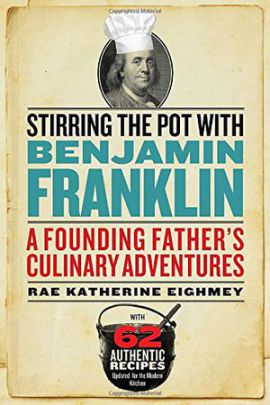 This coming Sunday, folks across the nation will be flipping on their flat-screens en masse, indulging in the time-honored American ritual of catching the Super Bowl live with family, friends or coworkers. If you’re hosting a party and are in need of affordable but exotic food ideas, you might draw on an unlikely source for inspiration: the life story of Founding Father Benjamin Franklin.

The intersection of food and Franklin is the subject of culinary historian Rae Katherine Eighmey’s new book, Stirring the Pot with Benjamin Franklin, in which she links various pivotal moments in Franklin’s life to the vittles he was likely partaking of at the time. Several of the period recipes could make for delightful game day dishes.

Franklin was born in 1706 in colonial Boston, where he learned the ropes of newspaper printing from his older brother James and published letters in the persona of a fictional widow called Silence Dogood. On the basis of his young life, we might expect Franklin to be a New England Patriots fan were he around today.

Yet Franklin is best remembered as a Philadelphian. The young metropolis served as Franklin’s home base throughout his adult life, though he spent ample time in London and Paris as well. Franklin became a widely known printing shop proprietor, staunch community advocate and sagacious political operative. After the Revolutionary War, Philadelphia was where Franklin and the other Founding Fathers gathered to hammer out a constitution for the new American nation. So he could easily be an Eagles fan too (though he might prefer it if the team were named for the turkey, which he called “a much more respectable bird”).

Rae Katherine Eighmey presents Franklin’s delight and experimentation with food throughout his life. At age sixteen, he began dabbling in vegetarianism. In his early twenties, citing the health benefits of water over alcohol, he convinced his printing-press colleagues to abandon their traditional breakfast of beer and bread for “water gruel,” a kind of tasty porridge he enjoyed.

From Massachusetts and Pennsylvania to England and France, Franklin got around. One constant across his dynamic existence was his fondness for food, which he comments on frequently in his unfinished autobiography—a primary source for Eighmey during her research.

“When I read the first few chapters,” says Eighmey, “he mentioned food 14 times. And he used it to explain his life at those points. They were kind of touchstones for him.” Eighmey had been looking for a fresh historical figure to scrutinize through a culinary lens—she’d been pleased with the way her previous book, Abraham Lincoln in the Kitchen, had turned out, and was itching to profile another subjects—so Franklin’s emphasis on food was deeply exciting. “This was meant to be,” she says.

During his teen years, when he was an apprentice under his brother James, Benjamin adopted a policy of strict vegetarianism. Moved by an argumentative book on the subject, the younger Franklin abandoned meat “for moral and economic reasons,” Eighmey says. So as not to impose on the boarding house cooks who prepared the food for him and the other workers, James Franklin struck up a deal with Ben: he’d pay him directly instead of paying the boarding house, with the understanding that Ben would find and prepare his own food. Ben Franklin soon became a prudent shopper with sophisticated tastes. He spent only about half of what his brother allotted him, Eighmey says, using the other portion to purchase books for himself. “He fed his mind as well as his body.”

On the long boat ride that brought him from Boston to Philadelphia in 1723, Franklin was tantalized by the smell of cod cooking on deck, and decided at 17 to abandon his zero-tolerance vegetarian lifestyle. He rationalized that, if it’s natural for large cod to eat small cod, surely it would be no less so for him to eat cod. His vegetarianism came and went over the next decades; he came to appreciate a broad array of dishes in America and Europe, meaty and non-meaty alike.

In a recent blog post, Eighmey suggests recipes—modernized a bit from the days of Eliza Smith’s The Compleat Housewife—for dishes Ben Franklin likely enjoyed that double as suitable Super Bowl snacks. She pairs a light starter platter of Revolutionary-style corn cakes (garnished as desired) with a heartier plate heaped with slices of stuffed pork loin. Seasoned with parsley and sage and glazed in molasses, the tender pork is sure to be as exciting for your taste buds as the football is for your eyes and ears.

From her book, Eighmey also recommends period-appropriate forcemeat balls—the kind Franklin would have feasted on in 1740s Philly—infused with mace, nutmeg and cloves. And as far as fourth-quarter dessert options go, Eighmey is partial to an apple tart that would take Ben back to his youth, ideally prepared with his favorite type of apple, the Newtown Pippin.

Though not much of a sports spectator in his own day (his Puritanical upbringing discouraged such activity), Franklin did have an athletic streak. In his younger years, he was a forceful swimmer, and he invented a precursor to the modern sport of kitesurfing.  He was also known for flaunting his upper body strength, pushing wheelbarrows packed with reams of paper and hauling 40-pound parcels one in each hand. So a part of him would probably appreciate the grit of the Super Bowl, even if the Puritan in him might have some qualms.

Few traditions are as purely American as tuning in for the Super Bowl, so it seems a fine occasion to remember a man who shaped our nation in profound ways all while taking care to savor the finer things in life. “Behind all his jolliness and good humor and sociability,” Eighmey says, “there’s always a kind of intellectual rigor, academic discovery, or rich social service.”