Culture | The Blessing and the Curse of Being Bill Nye
RssMail

The Blessing and the Curse of Being Bill Nye 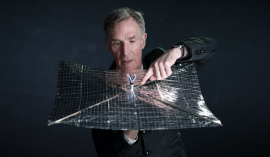 The new Bill Nye documentary opens the same way as his hit 90’s television show did: with the iconic chant. In Bill Nye the Science Guy, that chant meant a zany scientist in a bow tie would soon be arriving onstage to enthusiastically explain the science that surrounds us every day—gravity, thermodynamics, friction, centrifugal force. With wild gesticulations and antics, Nye of the ‘90s boiled down complex topics into easy-to-understand terms, and left young audiences eager to learn more.

In the new documentary Bill Nye: Science Guy, which opens in select theaters this week, things are a bit different. Here, the chant is coming from an auditorium of Americans of all ages, who have come not to hear Nye talk about the glory and wonder of basic science, but to expound upon the critical importance of science in society. The scene takes place during one of a national series of talks Nye did recently focusing on science education, space exploration and climate science.

The scene sets the tone for a film that aims to spotlight more than the life of an entertainer and science communicator. As viewers quickly find out, there’s far more to know about the “man behind the bowtie, including little-known personal details like the loss of his parents, the genetic disease that saps strength from his brother and sister’s muscles, his troubles with dating and decision not to have kids. But its guiding theme is his remarkable transition—from “Bill Nye the Science Guy, for kids, to the science statesman,” as Neil DeGrasse Tyson puts it in the film.

Directed by David Alvarado and Jason Sussberg, the documentary tracks Nye’s path to onscreen fame and his recent reemergence as the public—and often political—face of science. Recently, Nye has been criticized for using the current political situation to further his own personal fame, as well as speaking publicly as an expert outside his fields of expertise. The film aims to put the criticism in context and give insight into what drives Nye in his tireless outreach efforts. “We hope people who see this film will want to restore science to its rightful place in society,” they write in a statement.

Nye talked to Smithsonian.com about his thoughts on the upcoming documentary and the controversy that swirls around his emergence as a spokesperson for science.

You first saw the documentary at a screening at the SXSW festival in March. What thoughts were going through your head while you watched it?

Two things: It’s so serious. And you know, I’m a serious guy but I’m also deliriously funny and cheerful. And then the other thing is that there’s a part in the middle where my personal life is being addressed and it’s just, you know, I want to kill myself.

I signed an agreement that I would have no creative control over this thing. And I’m pretty sure if the subject of a documentary doesn’t do that, it loses its authenticity and the audience can tell. I decided to trust these guys and gals and I think it was the right decision.

You’ve been an integral part of so many children’s lives, and because of that, many people think they know you as a person. But this documentary shows how much more there is to know. What is one thing you often feel is misunderstood?

The blessing and the curse—the blurse—of Bill Nye is: What you see is what you get. I really am passionate about science and I really am a regular person. I can’t be “on” like the way the guy in the Science Guy show is “on” all the time. You can’t project that energy all day.

But people, my fans, are my bread and butter. I understand that.

You have been lauded for stepping up as the public face of science and a leader for action on climate change. But others have accused you of taking advantage of the political situation to build your own personal brand. What is your response to this critique?

I have to redouble my stridency!

But do you ever worry that this stridency could prevent you from reaching people whose opinions differ from yours?

It’s a balance. I do my best to be open-minded and willing to accept other ideas. But the notion that humans are not causing climate change or that evolution is not the most important or significant idea in all of life science—that instead the Earth was created with magical thinking 6,000 years ago—I’m not going to say: “Well, let’s just be friends.”

As a science educator, what would you expect from a guy like me? There’d be just as much criticism for not being strident enough. You know what I mean, jellybean?

(Note: Ham is the founder of the private organization Answers in Genesis, a Christian apologetics ministry that opposes evolutionary science and uses biblical answers to refute scientific findings. The group is also responsible for the for-profit Creation Museum in Kentucky, which opened in 2007. At the time of the debate, the organization was suffering financial struggles in their quest to create the Ark Encounter—a supposedly life-size replica of the biblical Noah’s ark. But Ham has claimed to media outlets that debating Nye sparked an influx of funding to the $73 million theme park, which eventually opened in the summer of 2016.)

Keep in mind that first of all, the long-term effects of that debate are yet to be realized. Although I may be wrong—I’m the first to say I may be wrong—let’s see what happens in ten years. The debate has had almost 6.5 million views online, and my understanding is that most of those viewers were on the fence, people trying to understand how they feel about creationism, the age of the Earth and other extraordinary claims that Mr. Ham and his followers make. So let’s see what happens.

Looking back, what bothers you most about how the debate turned out?

The last question of the debate, came from Tracey Moody, author of the blog Friendly Atheist: What, if anything, would ever change your mind? He says nothing; nothing would change his mind.

The real downside is [Ham is] raising a generation of kids in that area of the Ohio River Valley who mistrust their own senses. Denying, eschewing or setting aside the scientific method is not in anybody’s interests, especially for kids who are going to be running the show in a few years.

The documentary touches on several other times you’ve tried to engage skeptics of climate change in debates. Do you think that going after individual influencers is the best route?

The debate is a tool in the toolbox. There’s not a panacea there’s not a rubidium bullet (pun intended). There’s not a single solution to [Ham] raising an entire generation of kids who can’t think for themselves. But the debate, just that you’re asking me about it makes it seem to me to be worthwhile. It’s raised awareness of the extraordinary views of these guys and gals who do influence enormous numbers of school children.

Many have criticized you for speaking as an expert on topics outside your field of specialty. What is your response to this critique?

You don’t have to be an expert on climate change to see that it’s happening. I don’t have a PhD in climate science—I’m probably not going to get one. But I can read a graph; I’m very skilled at that. I spent years doing that. Mechanical engineering is applied physics. That’s all it is. Physics, physics, physics, people!

Although I am a lowly mechanical engineer with a license after six semesters of calculus—although that’s all I am—I can read the graph and tell you that the world is getting warmer and humans are causing it.

You’re one of a handful scientists many Americans can name. Yet there is a diverse group of researchers who don’t get such attention, many of whom spoke up using the hashtag #BillMeetsScienceTwitter earlier this year. Have you considered asking to have scientists appear with you on TV news spots or other appearances you’ve made to speak about evolution or climate change?

No. You have very little control over that. They don’t pay you. And they absolutely won’t tell you who is going to be on the other side.

[The questions] still surprise me. For example, it’ll go along all is just fine and then Don Lemon [of CNN] or Craig Melvin [of NBC and MSNBC] will read this crazy quote: “Ardvark Smardvark from the University of Nowheresville says that climate change is not real, what do you say to him?”

They still have this tradition in television news of showing both sides, of presenting both sides. But that turns out to be completely inappropriate when it comes to climate change. It’s just wrong.

In this current political climate, where the public is increasingly divided on toics like climate change and environmental protection. Do you see a way forward?

Climate deniers are, in general, older. They’re my generation and older. As we stop voting and start dying then young people will emerge who will get to work on it. They will embrace science and we will get to work for the sake of climate change and the quality of life of billions of people worldwide.

Anyways, this has been big fun. Let’s go—let’s change the world.

Check Out These Thought-Provoking Additions to the National Portrait GalleryCan the Museum of the Bible Deliver on Its Promise?