The Kremlin Turns Up the Pressure on Protesters Demanding Fair Vote 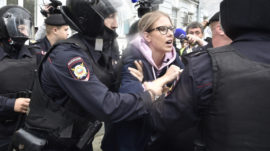 There was a sense of foreboding in the air in central Moscow on Saturday afternoon as the authorities prepared for the latest demonstration to demand that opposition candidates be allowed to run in the upcoming Moscow City Duma elections.

That was especially the case when about a dozen policemen detained Lyubov Sobol, a barred candidate who has become one of the main leaders of the three weeks of protests, as soon as she left her building around 2 p.m. local time to head for what she said would be a walk through central Moscow along the tree-lined Boulevard Ring.

“Hello to all the brave Muscovites who came out today! Proud of you!” Sobol, who is on the 21st day of a hunger strike, wrote on Twitter several hours later from a police station after being driven around for several hours without access to her phone, she said. 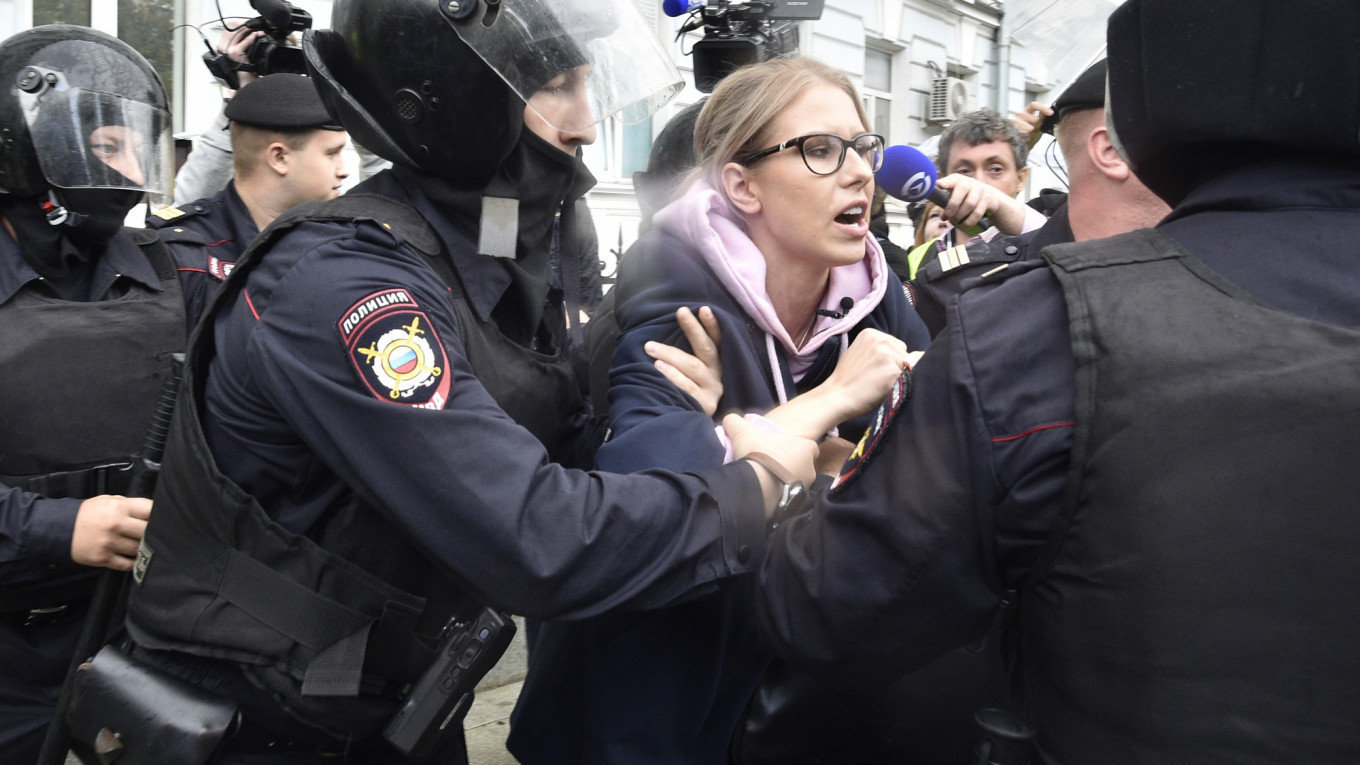 The protests have roiled Moscow since July 14, when Sobol and other prominent opposition  candidates — including fellow allies of opposition leader Alexei Navalny Ivan Zhdanov and Ilya Yashin, as well as Dmitry Gudkov, a prominent critic of Russian President Vladimir Putin — were barred from running.

To make it on to the ballot for the Sept. 8 vote, potential candidates had to each collect around 5,000 signatures, depending on the district, from city residents. But over the first days of July, opposition politicians had some of the names they collected invalidated by election officials. They argue that the authorities have barred them from running to stop them from challenging Kremlin-backed incumbents.

Over the last 21 days, protesters have mobilized for regular street rallies demanding opposition candidates be allowed to run. At one point, the authorities offered the protesters an outlet to vent their anger by approving a July 20 demonstration on Prospekt Sakharova, a location outside the city center. But that protest drew 22,500 people — making it the largest opposition-led demonstration in recent years.

Since then, the authorities have cracked down — hard.

After the Investigative Committee opened a criminal investigation into unsanctioned protests, they began night raids on the opposition politicians who were calling on protesters to take part in unauthorized demonstrations. Opposition leader Navalny and ex-state Duma deputy Gudkov have since been handed 30-day prison sentences, while Zhdanov, the director of Navalny’s Anti-Corruption Foundation, has been sentenced to 15 days and municipal deputy Yashin to 12.

During last weekend’s protest, police also detained nearly 1,400 people, while the courts — which heard more than 1,000 cases this week — have come down strongly on them. Some 88 people are now facing prison time, while another 330 have been fined. One student faces up to eight years behind bars.

This week, Moscow Mayor Sergei Sobyanin had warned the opposition that he would not allow the protest movement to plunge Russia’s capital into chaos.

“We don’t live in Zimbabwe,” the Putin ally said in an interview on state television, accusing the opposition of having “a desire to usurp power illegitimately.”

I Will Be Joining the Moscow Protests Today. Here’s Why

Yet people have continued to come out. Each week, Facebook events advertising the protests have seen increasing interest, and some of Russia’s most prominent celebrities have spoken out in support of the movement.

By the time protest kicked off at 2 p.m. local time Saturday, more than 20,000 people had said they were interested in going or would be attending. Another 1,000 gathered in St. Petersburg in support of the Moscow protests, according to local police there.

Protesters and journalists, including a Moscow Times reporter, reported having difficulties connecting to the internet along the demonstration route. Last fall, the authorities ordered two mobile operators to cut access to mobile data services in the region of Ingushetia during protests there.

Activists were not deterred — some even travelled to Moscow from other cities, including Volgorad some 1,000 kilometers to the southeast.

“I needed to see for myself what these protests were about because we don’t see the real thing on television,” said Dmitry Lungu, 22. “What I see is a large number of people who believe it’s time for Putin to leave office.” 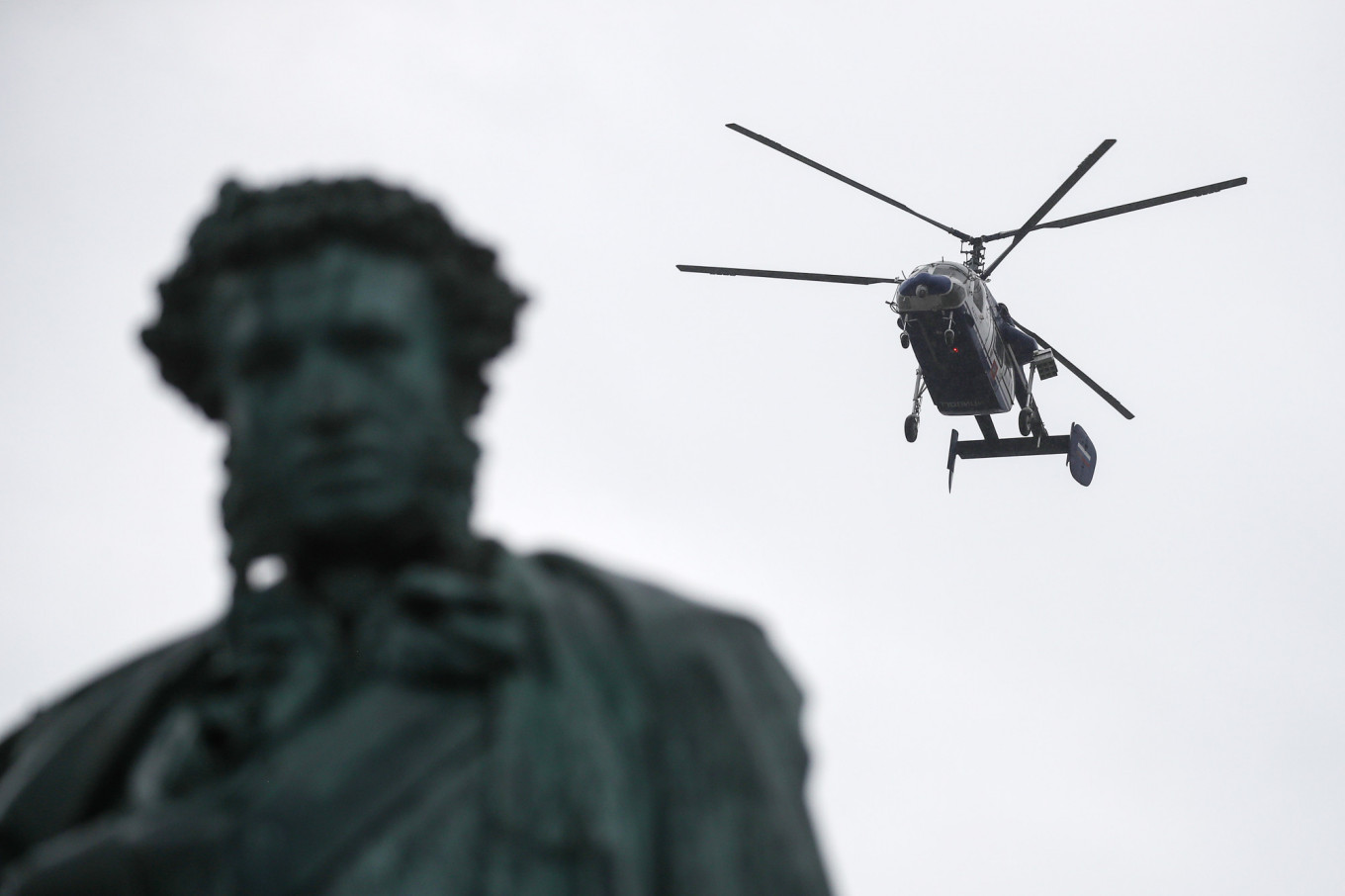 Because riot police blocked off much of the planned protest route, forcing protesters to turn down side streets, it was difficult to estimate numbers of demonstrators Saturday. Moscow police estimated that 350 turned out.

For their part, the protesters repeatedly broke out into cheers and claps, accompanied by cars that honked as they passed. At times they chanted familiar slogans like “Russia will be free” and “Sobyanin resign.”

Many were detained — 685, according to the OVD Info police watchdog.

“It’s a political crisis for the authorities,” said political analyst Yekaterina Schulmann. “So far they are using the methods and instruments they know — we haven’t seen anything new from them, just higher numbers.”

“But it would also be dumb to disregard the cooling effect that a violent crackdown can have on protests,” she added. 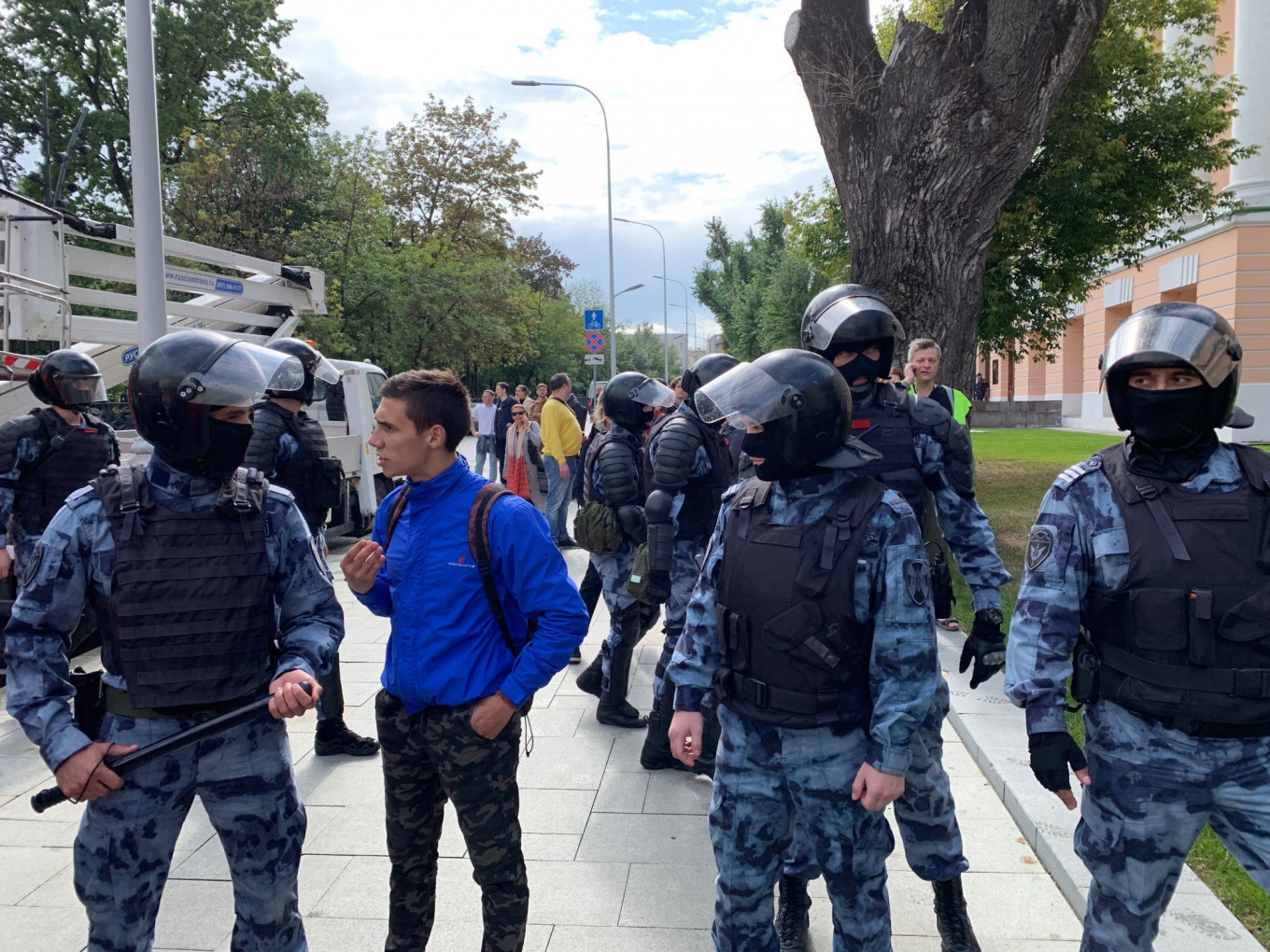 Although part of the crackdown was aimed at preventing opposition leaders from organizing activists, Schulmann noted that a unique feature of the protests is that they have taken on a life of their own despite some of the key leaders like Navalny having been sidelined.

“It’s a leaderless movement,” she said. “Almost every week we have had different faces that have become more visible than others, but what matters is not individual symbols or leaders, but the horizontal self-organization.”

The authorities nonetheless appear to have targeted at least one organization. On Saturday, the Investigative Committee opened a criminal investigation into the alleged laundering of 1 billion rubles ($15.3 million) by Navalny’s Anti-Corruption Foundation.

Activists have indicated that they won’t go down without a fight. They spent all of last week identifying riot police on social media, which prompted them to mask their faces this time around.

Not all protesters themselves, however, believe that the opposition has the upperhand.

“It’s important to take to the streets, but I’ve been coming out since August 1991,” said Vladimir Vilshansky, 73, referring to the month that a failed coup set the collapse of the Soviet Union in motion, “and Russia still isn’t free.”